About the title: Several ‘electric’ items this week, and lightning caused a few fires.

Google Photo Collections from past dates are now entered on the correct day in the blog, for week names bolded below:

Here was our Kittitas Valley Fiddler’s & Friends Thank you note with other photos taken 7/5/19. We had 11 players there.

Thank you card beginning, Katrina (AAC Coordinator) with Haley (our 6 yr. old mascot) who sat in the empty front row chair and led the group with Take Me Out to the Ball Game.

I’m working on the addition of 4 videos from February this year about Avalanche Control on John Stimberis’ presentation at the local chapter of the Ice Age Floods Institute, entitled, “Avalanches and the Seasonal Snowpack in a Maritime Snow Climate.” (February 7, 2019).
Sidetrip: this past winter, one of the explosives used for starting an avalanche did not go BOOM! A crew went and set it off on the day of John’s hike to Snow Lake. Hikers were warned at the trailhead.

I never published them at the time because it came at a bad time in my life with a serious infection of a tooth, which threatened my implanted heart valve until removed, 10 days later. My body reacted wrongly to the oral surgery and pain pills given afterward (? we really do not know the cause of my reaction), but the surgery team did extract the infected tooth and keep me alive, from acquiring endocarditis. I was out of commission and not completing blogs for a long period of time. I never caught up on the February Avalanche lecture, which was presented by one of my former students.

It was only this week that I realized his presentation had never been posted. It may make it into the blog by next week. I found the videos I sent to YouTube back then, with their links, but need to weave them into a small story about that evening so long ago.

I was up at 4:30 a.m. to feed Czar and put him out, put out the food for the other cats, take my Acetaminophen, and get more sleep.

Don’t miss this link below this post to see a wonderful reflection of the mountains in Snow Lake which John photographed and published at the top of his Friday weekly column:

Not so Nasty News July 26

Meanwhile, here, I will pick my favorites from his set, taken on his Nikon camera.

My favorites are at the goal of his hike, Snow Lake, as far as he went, about ½-way around the lake to the log bridge over the out-flow. 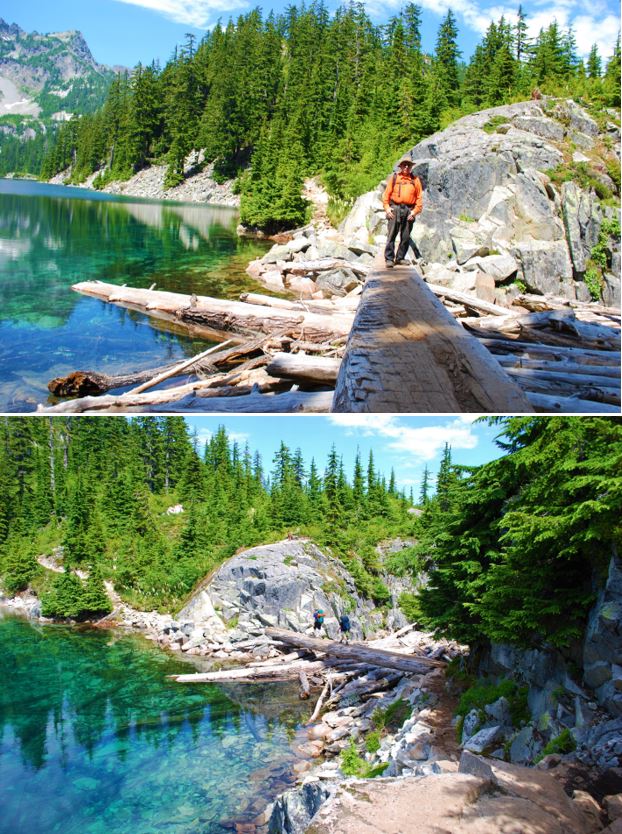 Top is a selfie (camera timer) of John on the log; bottom are the hikers ahead of him – a man and boy going over the log bridge.

I’ll pick a few earlier in his hike. Total distance was 8.6 miles. You’ll have a chance at the end to go to one link for all 35 of his photographs. I’m sorry I cannot videotape his explanation he gives me when he comes home and shows me. 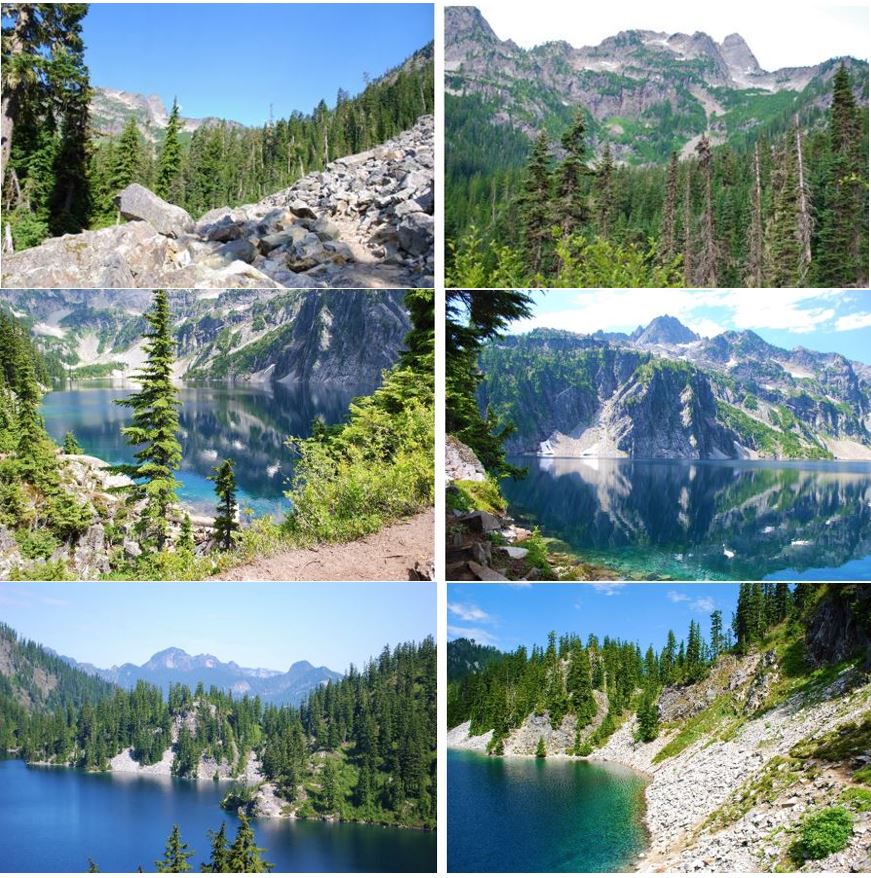 Top is part of the trail in through rocks and views of forests and crags, on the way to the lake and some beautiful images. On the way (when you look at the photos below), you will see interesting views along the trail of vegetation, a day-flying moth, wildlife area trail signs, scenic roots, unique trees, and wildflowers.

Here are all of his photos, in one link, below. Be sure to click on the (small i) in a circle to read the info about each photo. Particularly, look at the little black and white moth on a green leaf, and the description at the top of the INFO column about what it is and why he was out and about. Caitlin LaBar, my former student is a renowned Lepidopterist (since a very young age), and she provided the information when we couldn’t find a B&W butterfly to ID.

We were awakened in the early morning before dawn by thunder and lightning.

Left photo was captured by Evie Schuetz on a walk around Kittitas, WA @ 5:49 a.m. at the New Life Assembly Church; right photo, clouds taken @ 5:40 a.m. at the Kittitas Community Church – amazing how fast the sky changes in stormy weather. Permission granted to use Evie’s photographs.

From 7:30 p.m. to 8:00 p.m. we had 46 mph gusts, and thunder.
We had an exciting audible evening, but morning and evening episodes were totally out of our view, because of trees and hills.

Late afternoon and evening we had more thunderstorms. Those were captured by Lia Simcox, a professional photographer from Ellensburg. Only this week did I learn of her work from a post on “You’re Probably from Ellensburg”, a Facebook site with extraordinary information about our town.

Lia’s Photography Facebook site is listed under the name: Inside Out Photo Artistry. Check there for her photography description.

She gave me permission to post her photographs below: 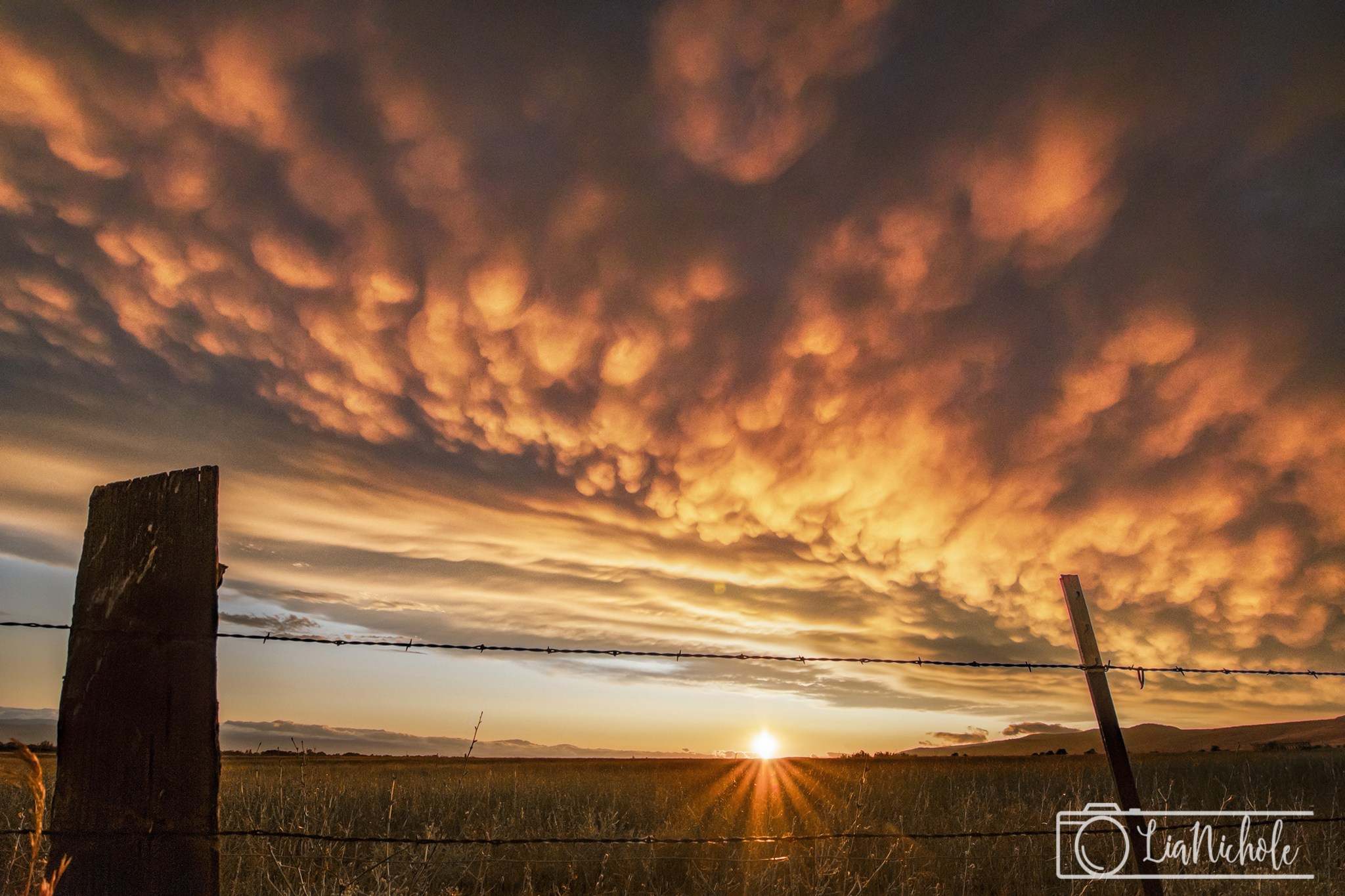 Sunset before the 7-23-19 Thunderstorm activity, by Lia Simcox.

I’ll use this photograph to describe the clouds. [Mammatus,
meaning “mammary cloud”, is a cellular pattern of pouches hanging underneath the base of a cloud, typically cumulonimbus rainclouds, although they may be attached to other classes of parent clouds. The name mammatus is derived from the Latin mamma (meaning “udder” or “breast”).] Wikipedia, click below.

Two more of Lia’s strikingly awesome photographs follow. The last is an “epic” photo (in the words of my friend, Evie Schuetz).

Words cannot describe these images. Thanks, Lia for sharing.

We had planned to go to the far end of Badger Pocket to a potluck to meet a friend we knew from the 1990s who moved to Arizona 5 years ago. She was back for a visit. I was not feeling well enough to weather 90° temperatures, and limited shade.

I decided to spend another day at home, recuperating from not feeling well. I skipped music at the Food Bank Soup Kitchen, first time in many moons and also, I did not participate in the SAIL exercise class at the AAC.

I went to Hearthstone today, with John driving, to let me off at the door. He proceeded on several errands, before coming back to pick me and my stuff up.

We had a nice set of players today at Hearthstone and a large and appreciative audience. Charlotte, Sharon, Manord, Gerald, Dean, Nancy​​, Tim, Minerva, ​Anne​. ​Sandy was in the audience happily singing and helping with the music.

New (to me; thanks to Evie Schuetz’s introduction) is a cool website on Facebook: YOU’RE PROBABLY FROM ELLENSBURG. You’ve heard about that above on Tuesday’s post above.

We left about 9:30 a.m. and went through Ellensburg, for gasoline, finding it for $2.959 at Circle K, but when John got out to pump gas, he realized he did not have his wallet (and so therefore not his driver’s license). I had to take the wheel and drive us over. It was his car, and I was planning on resting and relaxing on the way over, but had no option, because we didn’t have time to travel back home to retrieve it. My sore foot got a workout it didn’t deserve. 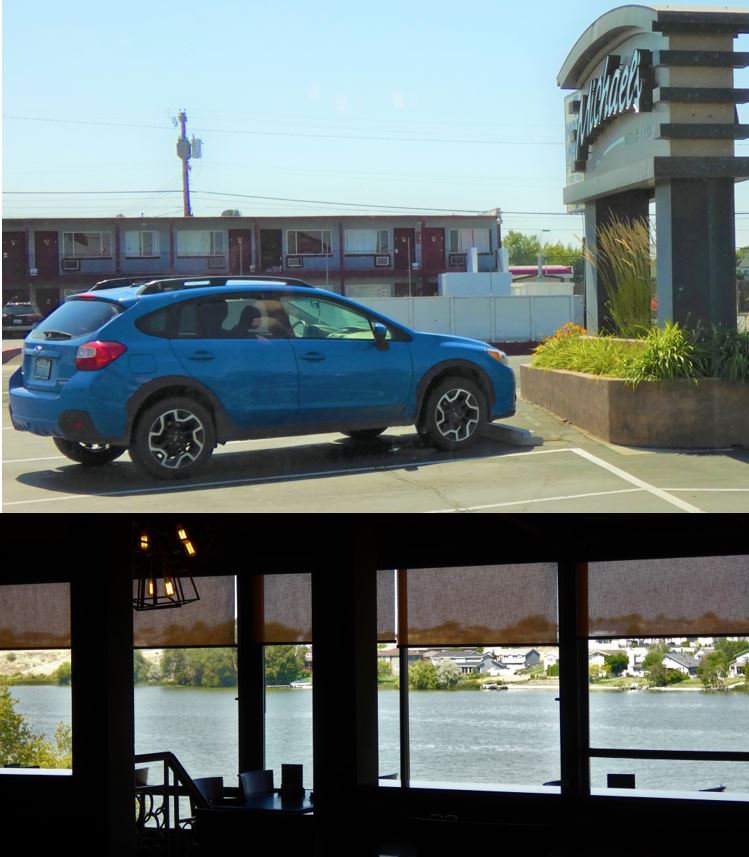 Top is John’s Crosstrek beside their sign, Michael’s On the Lake (nice restaurant on the shore of Moses Lake). Bottom is a view of our table (left of center) beyond a short set of stairs.

We had a reservation for 11:30, and got there a few minutes early. They don’t open until 11:00, so we had the pick of the parking lot. I took a few photos once there. We haven’t been there in a few years, and in the lobby is a unique (unused) wine rack. It’s made of White Onyx – a huge slab. I wonder its origin & cost. 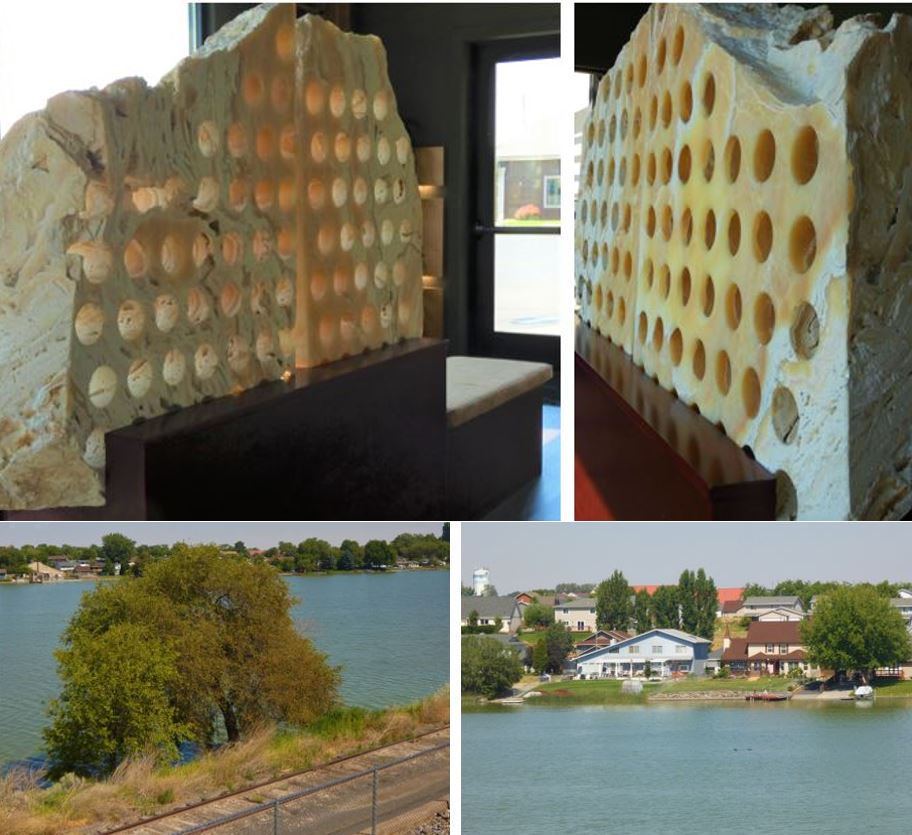 Top: Both sides of Onyx wine rack, Michael’s entrance vestibule “waiting room” for seating with cushioned benches. Bottom:
Ann & I both had the walkway view, from different directions, but the same across the lake. Much activity on the walkway – even a covey of quail strutting down tracks; boats and ducks on the lake.

Top: John had the Blackened Salmon Caesar Salad, & displays the cool lemon cozy. It kept the seeds off the food. Center: Ann and Fred both had Soup and Salad with Clam Chowder, and I had a BLT Lettuce wedge with blue crumbles, cherry tomatoes, and bacon. We all had ground pepper on our meals. Bottom: our share desserts. {Who knew? Lemon Wraps }

We shared desserts. John got his own plate with ½ the cheesecake piece and I had the other. Ann shared her Crème Brûlée with Fred.

Parting shot: Nancy & John Hultquist, Ann & Fred Joyal (all the way from the Upper Peninsula of Michigan, in Marquette).

The end of a nice day with friends, for a long time, since we met in graduate school in Iowa so long ago. John and Fred went on hunting trips, built duck boats (aka, pram), and the four of us walked around many places, with our dogs, ours a Brittany and theirs a Black Lab. We have many fun memories, especially memorable was their help moving us from North Liberty, IA to Troy, ID. John and Fred were in the U-Haul truck, pulling a vehicle full of stuff; Ann and I were in a station wagon, pulling another car loaded. Inside our car were two dogs and two cats. That move was in 1974.

We were rather tired from yesterday and the days before—and slept in a little longer than usual, awakened by a cat tussle in our living room.

We arose and I began cleaning up days of dirty dishes. John’s responding to a variety of emails, and I’m doing the same. He’s considering going to Costco today, but I’m not up to the walking on my foot. It’s still aching from yesterday’s usage. I have plenty to do here. My first has been the blog. John’s first has been a discussion with atmospheric folks about the problem with the local airport’s (KELN) elevated temperatures reported. It is an automated system that seems to have a sensor issue.

He’s also researching (with the help of old timers in the region) a photograph and the history of early electric power in the City almost 80 years ago. He’s working on writing it up with location photos included from Google Earth Pro. We’ll wait for another blog to post a shortened explanation in the blog to explain one of the photographs our friend Evie Schuetz took last week, which also will be posted later. The best thing might to be to give it its own web presence for others to enjoy and learn from. Currently, the local Kittitas County Historical Museum director, Sadie Thayer, is searching for some photos of the building when it was operational.

John left at 7:00 a.m. for a hike to Annette Lake. This is a small lake called a tarn (20 acres) in a rocky hollow called a cirque, carved by a glacier. John has worked on the first 2 miles of the trail, but the lake is nearly 4 miles from the trailhead.

Two views of Annette Lake, 7-28-19 He took a few dozen photos (the lake is not as impressive as Snow Lake was). I will put them on one link for you to enjoy.

John called me about 2:30 p.m., and just got home about 4:00 p.m. Folks going toward Seattle had to deal with a blocking accident and much traffic. Estimated delay was 2 hours or more.

The WA DOT camera in the area shows traffic at 8:02 pm. Left side is heading west, still 67.4 miles from Seattle. John was at this spot about 3 pm, but heading east.

Here is the link to John’s photos: