Here on the dry east side we have a bright day.

Friday was disrupted by a visit by the builders, and Saturday by a return of the person that had worked earlier with a backhoe (with small blade); early July. He moved a lot of brush off, dug a trench, and did pre-road clearing. Then he went away for 4 months, without a word. He says he will be back Thursday. His girl-friend/partner broke her foot and needs surgery. Maybe they need extra money.
Notes on his earlier work here: Click on the bold.

So, I did not get time to write, and this morning (Sunday) is weather-wise a good time to be outside.
I’m posting this now and won’t do anything more on it until this evening.

– – – – – – – – – – – – – – – – –
Okay, back to Monday.
I went to the Union Gap Costco and had lunch there with Suzy and Bob. After a long visit, I did the shopping thing. The Company has a business plan that involves moving things around so one has to hunt for things. This ensures that you see stuff that you might otherwise not be looking for. I did pretty well until I went for Beef Jerky. After several up and down isle trips I went and asked at the “red vest” station. They didn’t know but one agreed to help me hunt. Finally, he went and checked the list on the computer – affirmative – it is in the store. Another red vest said he thought it was on isle C14 or something; and sure enough, there it was.
One of my purchases was cod and halibut. There is nothing in the EBRG stores that compares. I tried a package and it was thin slices of Pollock heavily coated with a crust. I’ll guess 2/3rds crust and 1/3 fish all at the cost of fish.

Tuesday: Evans Canyon
The regional Fish and Wildlife crew planned for a re-vegetation effort on a part of the Evans Canyon Fire of 2020. I’m the blue star. 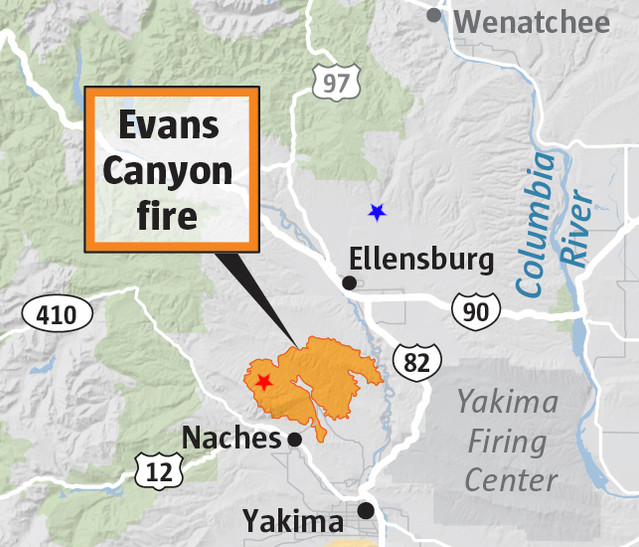 Three of them and 5 volunteers assembled at 10:00 AM. I was 3 minutes late because of snow. I have to go over Umtanum Ridge (using Umptanum Road) southwest of EBRG. The dirt/rock road becomes N. Wenas Road and goes over 3,130 ft. Washington Pass. There was 4 inches of snow. Who knew? That’s why I was a tiny bit late.

From the paved Wenas Road we car-pooled a couple of miles. No snow, but big water holes and mud. The white truck became less white and less new looking. I finally got it cleaned up Sunday afternoon.
I spent about 5 hours with a dibble stick: photo – not me. My teacher and comrade for the day was Melinda, local regional WA F&W boss. She took photos but I don’t have them yet. There were others working, but not close to us.
I should get a certificate as this was my first exposure. I think altogether we planted about 5,000 (?) sagebrush plugs.
Others scattered locally sourced native grass seed. The schedule stretched into the late afternoon and it was dark before I got home. 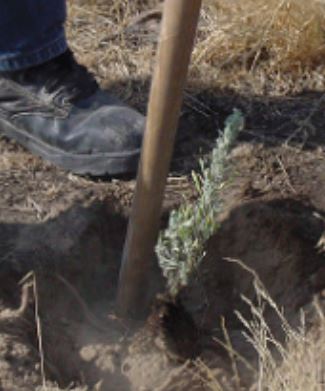 Wednesday I was on the phone for an hour with a Vanguard advisor. The advisor services group will be working over my funds, to improve on my sloppy practices. This coming Thursday I will again talk to the advisor and will have to approve the new plan. There will be a re-balancing each quarter, as needed, always working with the same advisor. I will also have him properly convey charitable distributions.

Friday:
Jessie was here working on the inside knotty pine walls. Walter and I had a long discussion of what to do with the big shed. Also, we did a bit of a walk-through of fixing a few things not quite up to standards in what has been done so far. I expect Jessie to be here again Monday because of rain. There is a roof elsewhere to be pulled off and re-done. They may be able to do that on Tuesday & Wednesday. We expect snow on Thursday. The electrician, Todd, expects to come this week, with maybe half-a-day to finish his work here.
I’ve got the drain under the drive topped off with gravel. Even if I do nothing more on that, it is good for winter. I have a few rocks to load in the cart and move. And I’m slowly working on the newly dropped trees (for firewood). Phyllis and Cameron carted off a few things this week, and I sent their son Joseph (& Julie) several boxes of kindling for their fireplace. They live in the Seattle area.