Current weather models suggest colder air and a bit of snow approaching Washington’s Cascades. This isn’t expected to be a big event, but it will kick off winter in our mountains. 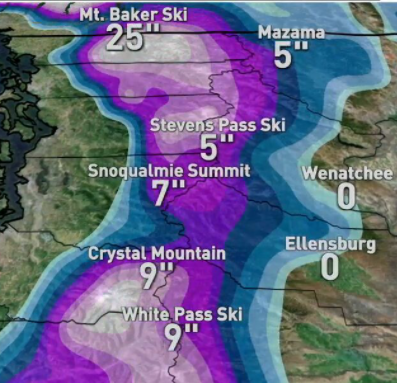 Ellensburg is too far east and on the down-slope, so the snow won’t make it this time. But I’m 700 feet higher and that may be enough to get the ground covered.
On the map, depth of snow by Sunday evening is shown. I’m near the ‘b’ in Ellensburg.

I hope to get a few more days of outside work. I did get the drain under the driveway in front of the car port. The total project is unfinished, but if I don’t get anything else done on this, I can get by for the winter.
I’ve moved lots of rock and dirt. Some I was able to put through a ¼ inch screen with the rocks and the “fines” going to different places. This week there has been enough rain that the sifting is not working, so I’ve been carting the stuff to an out-of-the-way stockpile. Work for next summer.

Phyllis and Cameron came on Tuesday and another piece of old furniture (and more) went away. 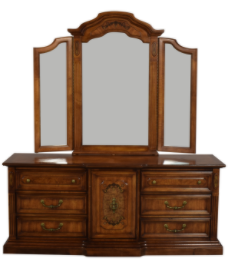 The main piece this time was a dresser, somewhat like the one shown. The photo is of one much fancier than what we had. The center only had a low shelf. The wood was stained dark brown and no grain was visible. That is the last of the things like this that came from Atlanta.

We removed all the things in the chest freezer that had a home in the living room for the past 8 (?) years. That room, as built, was a travesty. Now it has lights, French doors opening onto a large covered deck, an animal door, and proper windows. Some inside plaster and paint are needed.
I had accumulated bushel-size fruit cartons – double cardboard apple boxes. Also, I had ice in plastic bottles. The freezer is not a frost-free model. In the house at about 70° the accumulated frost fell off in about 6 hours. Wednesday, I moved the chest, using rollers of plastic irrigation pipe, into the walk-in pantry of the remodeled 2-car garage. By noon the food was back in the freezer, almost as solid as when it was removed. Phyllis took a few things and I threw out a few. It is nice to have that chore completed. I still have an old chest freezer I though was nearly dead when this one was bought on sale. I’ll get that one empty and donate it – – likely to Habitat.
Phyllis found a dividend check ($10.46) from the CO-OP – dated July of 2020. These dividends are reported to the IRS as income. The bank folks didn’t want to deal with it; and it was in Nancy’s name. Off to the CO-OP. I was given a new check in my name, and went back to the bank for my $10.46. Now I need to get the info to the CPA who is trying to fix the tax mess. Of course, getting a person at the IRS to work on this is next to impossible. At some point though this small dividend will be handled again.
The account at the CO-OP was in Nancy’s name. I did not re-enroll when I canceled the account. If I was spending $10,000 a year there being a member would make sense. Now I mostly only buy seed for birds and use a credit card.
One of the issues with the re-model was the removal of a ramp (inside) leading to a small open window, with a flap, for the dogs and cats to use. Outside there was a small enclosure and another ramp. Annie was getting to the point that she found the ramps hard to navigate. I had the builders add a nice animal door from the living room to the new deck. The animals prefer a different route.
I cobbled together a thing that fit into the sliding patio door. It leaked a lot of air; not a problem for many months, but the next four or five cold months mean a fix was in order.
I ordered a commercial door and installed it Friday mid-day. The two cats, Rascal and Czar, and Annie (Brittany) are into a learning curve – soon to be over, I hope. On the outside the white frame 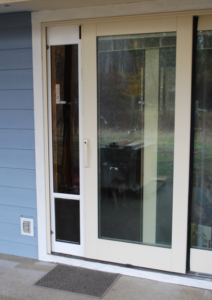 doesn’t match the door. Inside, the door is blond grained-wood; again white for the new thing. Maybe I’ll fix that next spring.
Friday: I can’t manage to send messages or photos from the iPhone to my email (computer) or any place else. {One null send went through.} Thus, if I want photos, I have to resort to a 13 year old Nikon camera. I plug it into the computer with a USB cable and it is recognized as a simple storage device. For the iPhone, I bought a special (Apple Lightening to USB) cable but that hasn’t worked either. Someday I’ll learn how to do photos with the iPhone as I have done with the Nikon for the past 13 years. Oh well.

Two photos of the remodeled front of house

I’m going for a fire resistant building and landscaping. The blue is HardiePlank (cement + fiber) and the lower part is panels of false sandstone. Rather than vegetation, small rounded rocks and gravel provide a non-burnable surface. The far side of the ramp is lined with vesicular basalt (many holes) and this side has lichen covered basalt rocks. There’s more remodeling that’s happened, but there are painting and lights to do, so I’ll wait.

About 6 weeks ago, while still hot and dry, one of the cottonwood trees shed a large limb. It is 33 inches around where it broke. Since it fell, I’ve cleaned the brush out and taken the small branches off. Saturday afternoon I cut it into firewood length (about 15 inches) and tossed those out to where I can get the truck (later). When first felled the wood has about 40% to 50% moisture. Think heavy. When cut, split, and dry that will get to about 12%.
I then cut seven more trees down, with a few more picked out for dropping later this week. All this is meant for next year’s heating, so I have lots of time to processes it.

Jennifer Marohasy – Scientist, Author and Speaker
She lives in Noosa, 500 miles north of Sydney. Click on the next line.

November 6th is current, but may get pushed to the side when she posts a new one. In this one she explains her background and connection to the Great Barrier Reef. There are links to many photos, with more stuff to follow.