John says: “Nancy and Elise introduce autumn colors today. My hometown of Clarion, PA began an Autumn Leaf Festival in 1953; I don’t remember it. Soon after the town and the College combined home-coming week with the Festival. An outbreak of influenza at Clarion College slowed the growth in 1957. In 1962 a young lady from our neighborhood – a year ahead of me in HS – and now in a sorority wanted real “autumn leaves” for their float. Another neighbor, with a Jeep and small trailer, and I visited numerous trees not far from town, and a colorful float was made.” Link to History
Autumn Leaf Festival in Clarion, PA postponed this year, by COVID restrictions. Usually held in September.

I realize Poison Ivy is not the normal photo pictured in autumn leaves photos, but Elise took it at the same time and I was drawn to it, because of my past history in GA with poison ivy on an adjacent lot to the house where I grew up in Atlanta, GA. I was extremely allergic to it.
I knew to avoid it when in the woods, but I never saw the red-colored leaves of it, probably because we received a lot of rain in Atlanta, GA. I looked that up and found this explanation online: Poison Ivy with red stems and/or red leaf edges are less common, but hardly rare. When poison ivy doesn’t get enough water, the leaves will turn red.

Back to now: I slept in, but I need to go to Yakima Heart Center for two routine visits for a check of my implanted defibrillator and an appointment with my cardiologist. While there, we’ll make a Costco run.
Printed my Immunization record and added to info for Dr. Krueger.

Morning call from Ellensburg Animal Hospital about Annie’s pain medication (TRUPROFEN – chewable tablet 100 mg). We just cancelled it. Long story, but they “by law” cannot refill a prescription from 2019 without another visit. She’s seems to be doing fine without it. She was only taking a ½ tablet a day, first a.m. & p.m., but recently, only ½ a day.

John has been out to feed birds and horses, and confirmed the temperature is freezing.
Need to send the current blog to 3 people whose photographs I used. We’re leaving here about 11:30 for Yakima.
I’m having an Ensure chocolate shake with peach yogurt, and John’s having bacon and fried potato.
Supper: Sandwiches grilled cheese with crumbled sirloin tip roast, cinnamon pears, yellow apples, fried onion rings, and French fries. Dessert: Nanaimo bars with blueberry swirl ice cream.

Slept in until 8:25 and John helped me get my medicine tablet out of the new container. The company changed what was an easy peel back method to a more difficult one in my opinion. Thanks, John. I’ve taken it and have to wait a half hour to eat. So, I set up my backup drive.
Today is our day for several important errands.

I will review those briefly below. We’re using this symbol to indicate stops: ∞∫∞ First stop, to drop off two 35mm slides from long ago of John with his sister and brother at Jade Cove in CA to transfer to a digital image we can share with the family. ∞∫∞ By another friend’s house to leave some things. ∞∫∞ I took the paperwork to the WA Dept. of Licensing, for a handicapped yearly parking sticker, for use on CWU campus, and was surprised it was issued right away. ∞∫∞ Next to Bi-Mart to buy slippers for John, as his fell apart, and to buy some cat food on sale. While there, I bought some OTC ointment for my “dry skin” that Dr. Krueger recommended, Eucerin cream. ∞∫∞ Next, we’d both decided to go to Super 1 Pharmacy for our 2nd Pneumonia shot (supposed to be a good thing if we get COVID virus; makes it a lighter case), but it was to be only for me. (I called ahead and found out) that they were not marked with our names, so they gave away all but one dose. They ordered another for John and he will get it another time, but his name will be put on the serum and he’ll be called. I received mine today. ∞∫∞ Next, I went by Jerrol’s to pick up my Roadside Geology (RG) book that arrived last week. It’s RG of Southern CA.

Set up the stuff for the study group tomorrow to send to newly added members.
We ate dinner late but this sunset was taken by a friend who submits many photos to the Kittitas County Visual Delights Facebook site, and she’s given me permission to include them.

This was taken late in the evening-she called the fading sunset. The bottom two clouds earlier on other photos submitted looked like salmon swimming upstream. Photo by Barb Bailey.

Morning sunrise 7:23 a.m. by a friend south of us with a better view than we have. 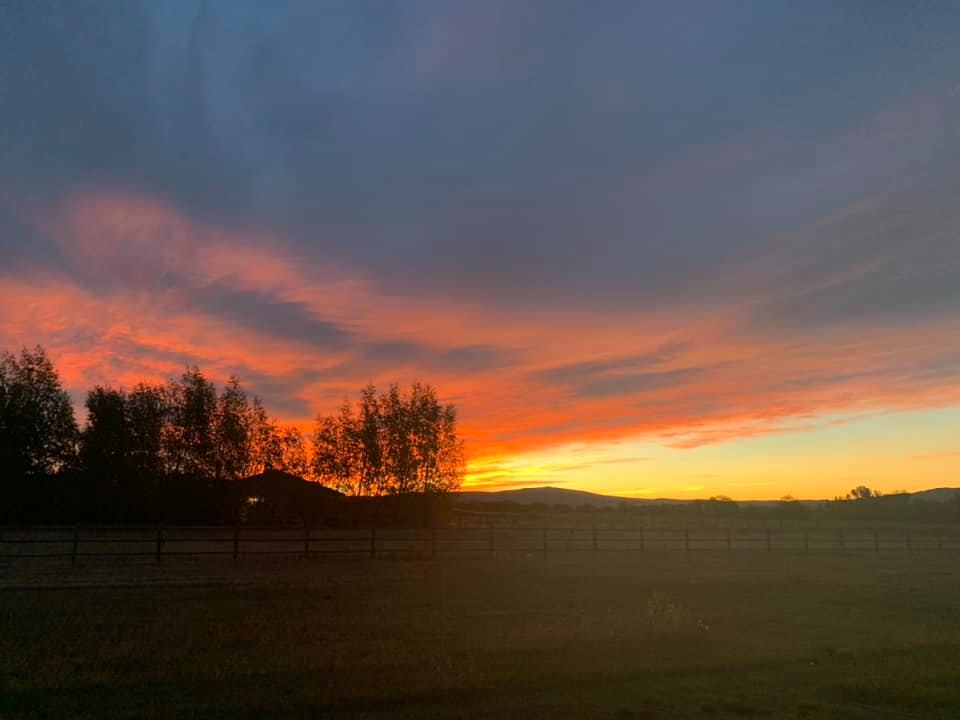 Before 8:00 a.m. robocaller (blocked) so rang only once.
Warmer today, and sunny. John worked a lot outside and I worked inside.

He left with the Ford truck, with canopy, to drive to town for supplies: grain, cat food, returned to Bi-Mart loafers too small, for slippers that fit, and was able to get his 2nd pneumonia shot.
I got off the note to the study group about this, but now am listing some research paper links.
Talked to Summer at Cle Elum Clinic and reported John’s 2nd Pneumonia shot received today, and she updated his immunization record.
3:01 Blocked another robocaller from Colville, WA (690); 3:14 Jeez, another robocaller from Darien, WI.

John called from Bi-Mart and will be here about 3:50 p.m. So I need to get Annie out to great him. She’ll be happy.
Supper: Hamburger with cheese, sliced yellow apple, last of the summer squash fried with onions. John grew the last two. Dessert: shared two small Nanaimo bars with blueberry swirl ice cream.
I did a lot of tax receipt filing before and after supper. 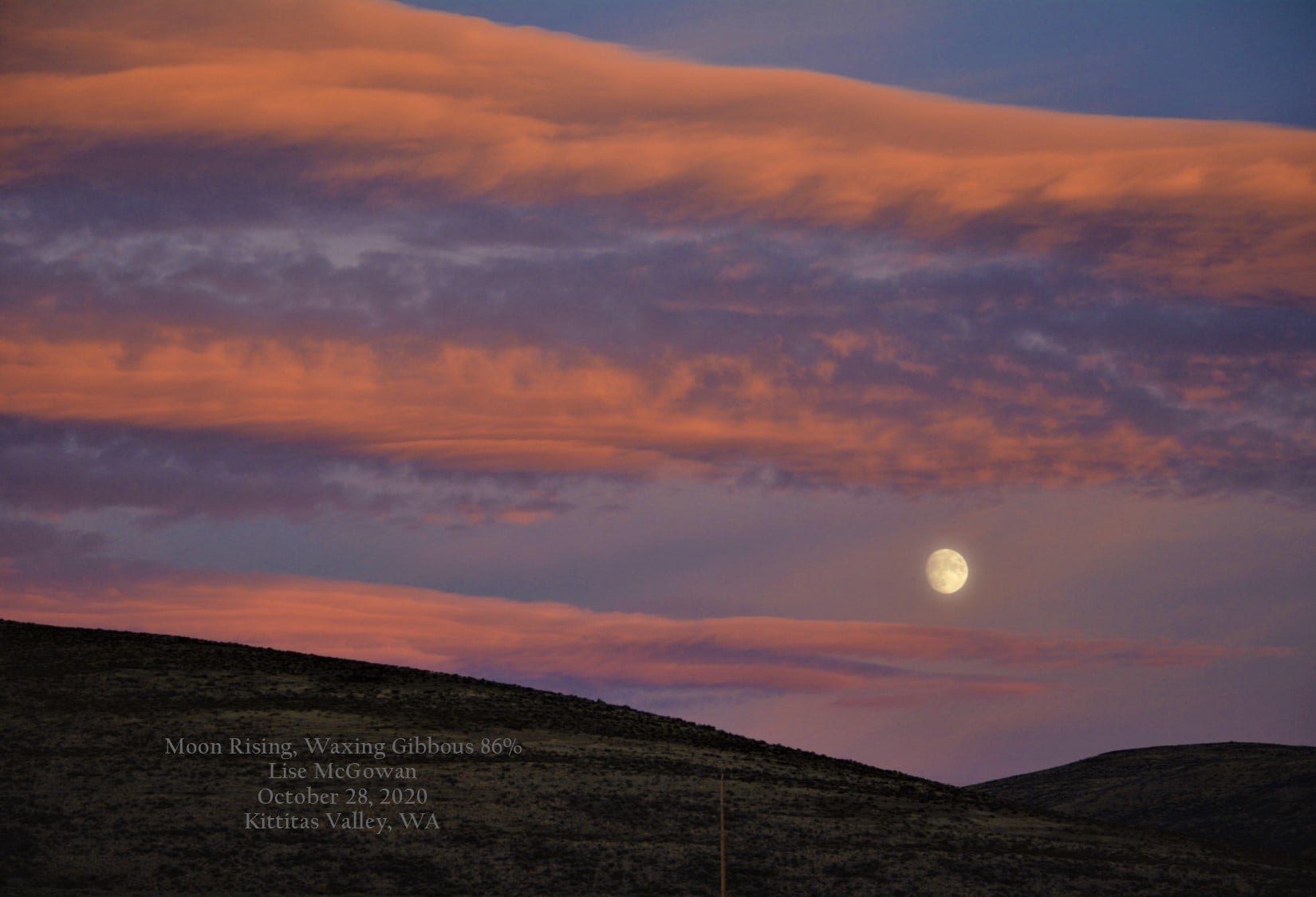 Moon rising photographed by Lise McGowan, in our valley

Had a late lunch of leftover Oriental flavored Ramen pasta soup, with added cooked chicken breast meat and Cheez-its.
Was 66° at airport 2:00 p.m. but due soon for an update.
Outside house was 56.3° and at airport 67° at 3:00 p.m.; our sensor needs relocated – or theirs does.

I need to post for a cat litter box (open, no top). Posted request on Buy Nothing East Ellensburg, Kittitas FB Free site. And on Ellensburg The Free Box. Just got my first offer from the lady who gave us the child’s gate, Eva Frink. We’ll pick it up next week (Tuesday). And, we need to carry her the empty egg cartons.

We completed our voting ballots this morning, and John drove to the Courthouse to deposit them in the Ballot Box. On from there he went to Kittitas, to deliver a 16# bag of cat food to the Kittitas Pantry, as a donation. They repack it in smaller Ziploc bags for clients.

The local paper reported on a need: I talked to Peggy Beals via email about donation to the Ellensburg Community Clothing Center to help buy a new more secure drop-off bin for clothes. She gave me the address to mail my check, and we got the check in the mail. Also, mailed another check to pay for our reconfigured plumbing in the new utility room and the well “shocking”. So, that’s behind us.

Lunch: John had bacon and fried potatoes. I had a late lunch, a bowl of chicken soup, with cooked chicken breast added.

Woody was ready to eat on the front porch at 5:00 a.m. So I fed her, took my Acetaminophen, and went back to bed.
Set some of our clocks back an hour to daylight saving time tonight. A couple more need doing.
John took mail for pick up to the mailbox.

Early a.m. I had a Chocolate Ensure Shake with Vanilla Bean Yogurt.
Brunch: Bacon with Blueberry Pancake.
John went to feed horses, and I finally finished loading the dishwasher. Phew. Started it at 6:00 p.m.
Two more robocallers blocked today (within a half hour of each other). 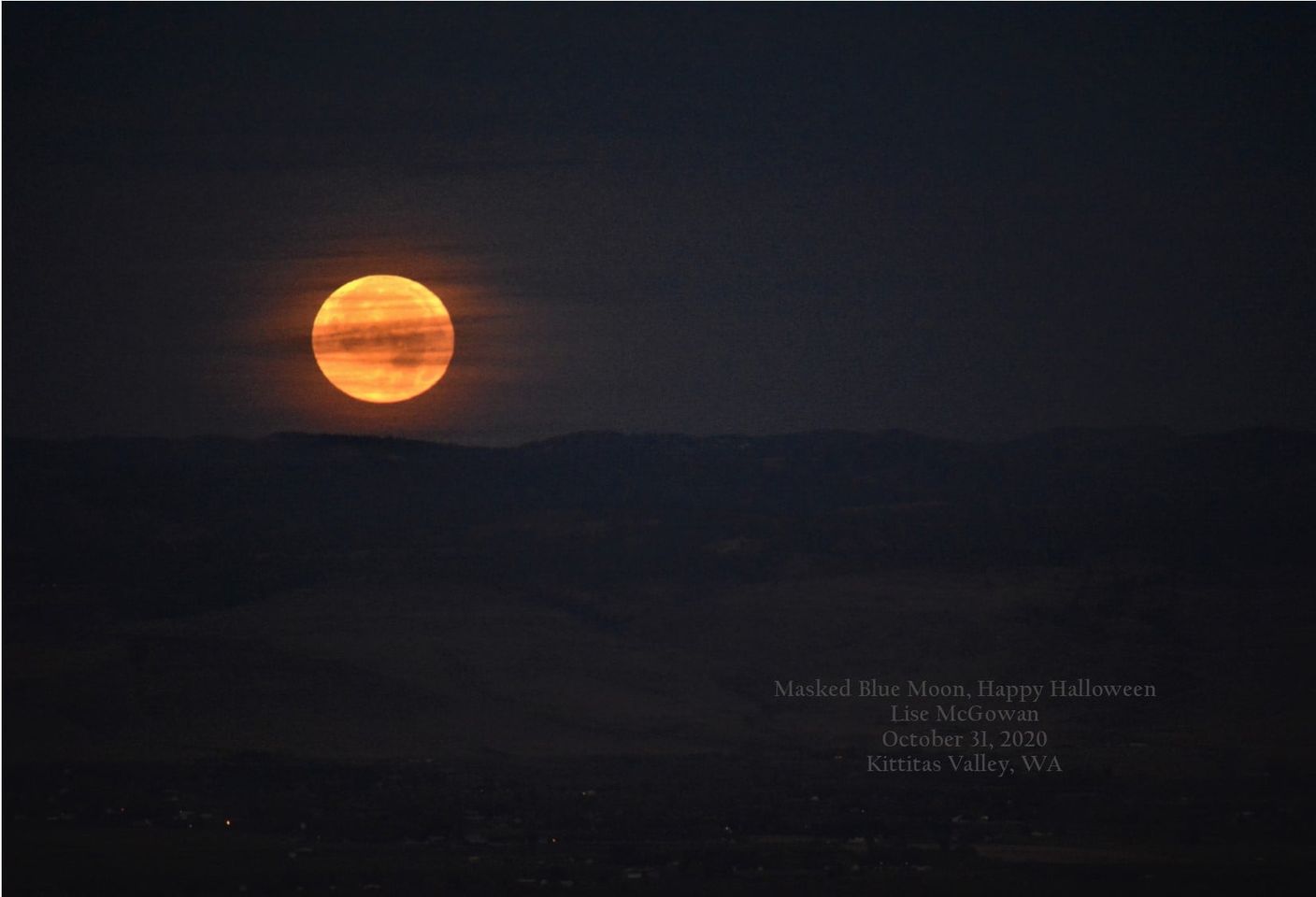 Lise McGowan’s Masked Halloween Blue Moon not to happen again on Halloween until 2039. Last time it happened was 1944. The mask is very appropriate for our 2020 pandemic year!

“Blue Moon” is now used when there is a 2nd full moon in a month. Rarely do atmospheric conditions cause a blue colored moon. But it does happen.

Moon is setting as the sunrises in Kittitas Valley this morning: 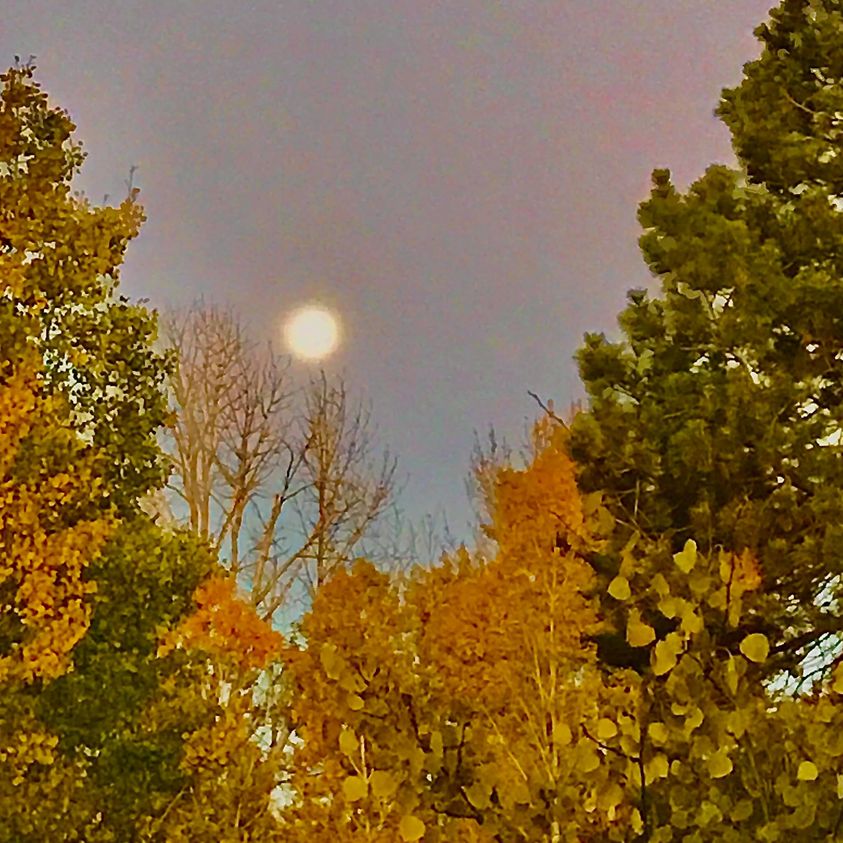 Two more robocallers blocked today (within a half hour of each other).
Up before 8:00 a.m. to follow the geology pre-show comments.
Nick’s 9:00 a.m. lecture, went long this morning for ~900 viewers worldwide—1 hrs. 51 mins.

Having a hot cup of coffee to warm up, and sipping a French vanilla yogurt in chocolate Ensure milkshake. 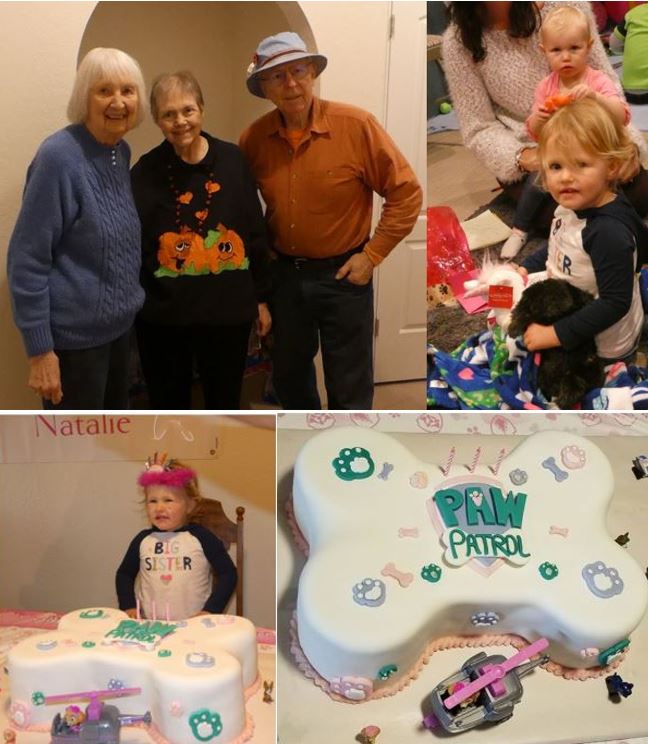 Our entry into the family was in 1974 because of Brittanys and attending all-breed pointing field trials and shows, and our friends, Karen & Bob Oppie, also Brittany breeders. Top left is Karen Oppie, Nancy & John Hultquist, right is Karen’s daughter Chris Sandman, grandma holding Nora (1 yr. old) and Natalie in front opening one of our gifts, sharing with Nora a smaller version of a Unicorn. Bottom photos, Natalie with homemade cake by a family member, Christina Frantz and someone else.

We were treated to much food before dessert: pizza, fruit, and appetizers, hot coffee, or cold drinks.