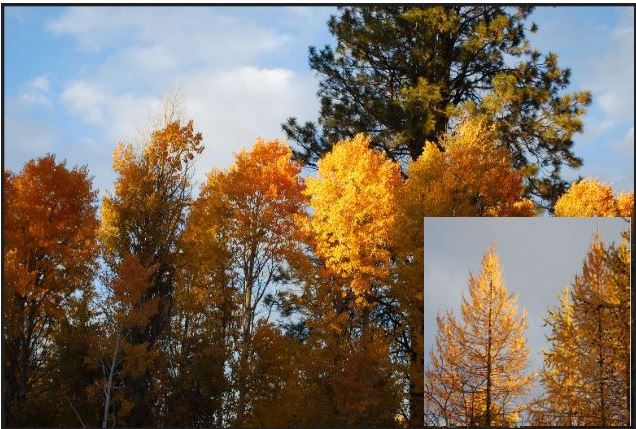 As the sun went low today the Naneum Fan was golden with (mostly) Poplar trees, main image. We imported a few Tamarack (Larch), inset.
They prefer a spot higher, north-facing, and wetter. Nancy used a photo in October of such a place.
This coming Tuesday about mid-day the weather folks think we will get strong gusts. Likely the color will be on the ground by Wednesday morning.

This story was much in evidence last Monday. I’ve tracked the location down and have the “Google Earth” view on the right, below. Note the red dot. That’s the location where from the left image was taken.
In a twist of fate, the fortuitously positioned artwork is called “Saved by the Whale’s Tail”. That’s from the link, where more photos and story can be found.
Whale tail meets train 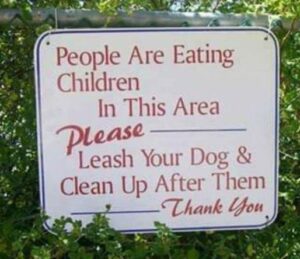 I would have worded this sign differently.
For example, if it is only one dog why use the plural ‘them’.
I’d say “Clean up after it.”
The rest of the wording can be improved also.
Your job.

I think this story only involve Canada.
The grocery store named “Whole Foods” (part of Amazon, I think) decided that wearing a Poppy in remembrance of veterans was not to its liking. The Brits and Canadians refer to “remembrance” with the poppy on the left below (generally), that differs from the common form in the USA, shown over a camouflage outfit.
There are 14 Whole Foods stores in Canada. The company reversed this ruling, after a bit of controversy. Link to story

I get a poppy from our local veterans when they show up at the grocery store and raise money. Mine is on a blue “bucket hat”, and I usually wear it enough that the symbol needs replaced once a year.

A famous poem (first lines below)
was written by Canadian John McCrae, in 1915.
In Flanders fields the poppies blow
Between the crosses, row on row,
That mark our place; and in the sky
The larks, still bravely singing, fly
Scarce heard amid the guns below.

I’ve been told not to use a photo of slugs, so this is just an image, and you can conjure up a slug image if you like.
It is almost 7 PM on Friday here on the Naneum Fan and the USA still hasn’t figured out who it elected president.
With massive computer skills in this country, the election has been handled with all the skill and intelligence of a slug. Voting is a state responsibility and many of them have failed.
And that seems to be the good news.