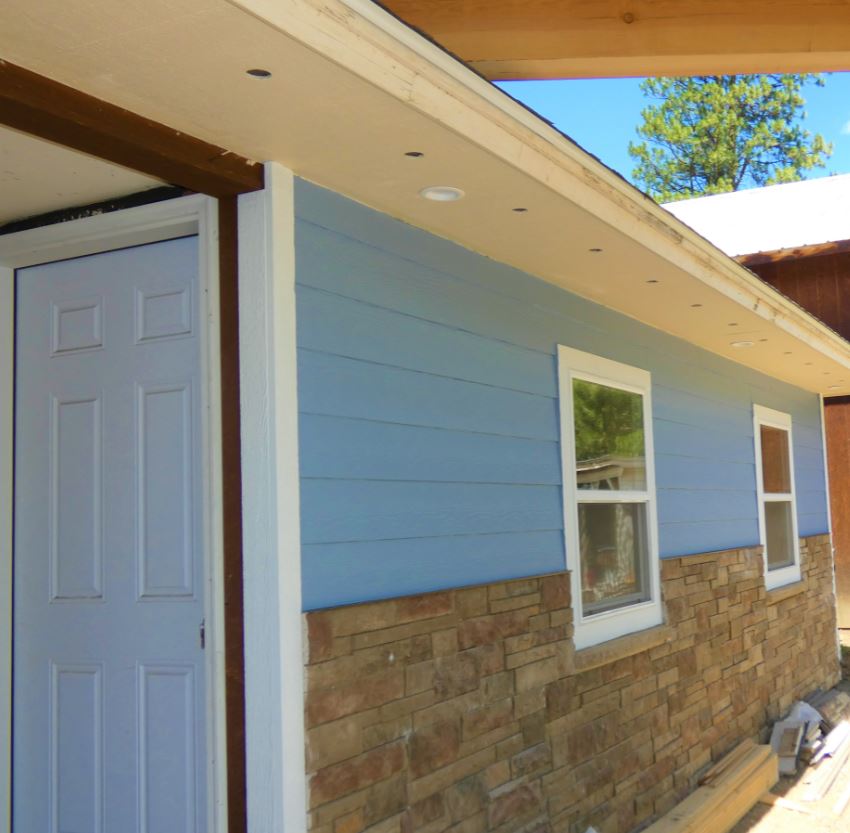 This is the changed attached 2-car garage to livable room of our home. The outside front siding is blue painted HardiePlank above stone panels. Part One of the remodel is 99.44% finished.

Nick’s nights off were Mondays and Fridays. Our friend in Nick’s audience presented during those evenings, starting at 5:00 instead of 6:00 p.m. PST. She’s going to continuing musical interludes on the same days, in Nick’s absence (except for NEXT week the Friday will be scheduled to a Thursday, because of her guest’s schedule.

Kathy plays Favorite Funnies Past, as Spike Jones
She’s going to add a playlist of tonight. I kept losing my Internet and was only able to watch parts of it.

She has called for a Party on Saturday to re-watch one of Nick’s livestreams. It will be at the 9:00 a.m. hour, PST. You have to Join via the Nick Fans Facebook site.

Transferred money from my account to the lumber miller’s at my bank, Umpqua, and then notified the miller Jason and his wife Greta (also his office manager) and Clover Construction Company.

Started late from sleeping in after a late night bedtime and sleep interruptions from cats in the wee hours of this morning. One male cat, Czar, knocked on the window and meowed loudly to be let in, and neither one of us can figure why he didn’t go through the doggie door as he does all the time. The other awakening was from Sue, an outside feral cat, with loud meows and low growls, to let us know she brought us a mouse to the front door. Seems she wants to let us know she earns the store-bought food. She does not use the doggie door; only the two males do.

Finally got up and took my Alendronate on an empty stomach. Plugged in my 5Tb external backup drive for its Noon backup. Been taking care of things with LiveStreaming group.

We had to deal with making an appointment for John at the dentist. Long delayed but cancellations allowed him a next day slot. He had a small bit of tooth (protecting a filling) breakaway, confirmed during the cleaning, with the filling coming out.

Need to finish my note to planning team at CWU Foundation. (James, Charlotte, etc.). I did and the Zoom meeting still awaits a designated time.

Later today we went to town for errands. The first part of our trip was maneuvering a Chip Sealing Operation on the Kittitas Hwy.
Here is an example of the process:

It was a slow 1.5 mile trip from Ferguson Rd to No. 6 Rd. to turn to access our first stop, 3430 Number 6 Rd to pick up our pots we gave Hens and Chicks to a lady and she planted them this spring.

We went by Bi-Mart to check numbers, picked up Metoprolol from Super 1 Pharmacy, and went on to Fred Meyer for John’s Colas and any Kroger stuff for using our first Tuesday of the month, 10% Senior Discount.

Then out of town by Amy’s to leave box of groceries and some summer squash from our garden. Not much of a crop this year, yet. Guess we’re too high in elevation and with so much wind.

Today we had 43 and 45 mph gusts, making driving difficult with the buffeting, and walking across parking lots even worse.

Walter Davenport (contractor) was here at 6:45 a.m. working in the new room. He’s got about 5 projects going in the area so the crew moves around as sequencing demands. These things slow completions, and “completion” is what triggers clients needing to pay the balance. Seems this will happen next Monday for the garage conversion.

At 9:00 a.m. there was an impromptu video by Nick Zentner, on a hike to Beverly Creek, where John had assisted Marty Kaatz (now dead) with his debris flow documentation. The storm was a small cell, but intense, thunder, lighting, and rain, above a ridge top at about 6,000 feet elevation. Nick hiked into that basin on a ridge top.

John plans to do chores and then come in for his shower. Today he goes to Tracy for his teeth cleaning, which was postponed 10 weeks because of the COVID-19 business closures.

I spent time with the HELP DESK CWU and Paris to get my computer updated. Need to RESTART at least once/week. That will install needed updates, which are not done any other way.

Called and left a message for Lacey about an upcoming end of July of my teeth cleaning and need for antibiotics, and the problems with INR being raised. I need to know when to have it, before, or after. Later, we decided I needed to have my INR draw the next day, so we could adjust the dosage fast, as it was already a little higher than last month.

Watched a noon Lunch Bag Zoom from the AAC with Roxanne Laush talking today on Inspired Health & Wellness Coaching.
Walter came back just before 11:00 with some boards and to fix the screw in the door. He stayed, working on the outside siding.

I spent a lot of time searching for data to fill in the PDF for Form 4868 to apply for our extension notice for 2019 taxes to get it mailed before July 15. I have the pieces, but need to find a Post Card and tape information to the back so they can date and return the card as acknowledgment it was received. I will include a check to pay estimated tax amount owed.

Supper: John made a casserole dish with Lasagna in one side, and butternut squash, brown sugar, and pecans in the other. He had dessert of Cherry Pie and ice cream. I passed on that. I drank orange juice with my dinner.

Shoes on and go out with camera. Back at 10:10. John showed me all around the front of the house and explained the plans and the progress I had not yet seen. He also took me to the garden for some more information and photos of the onions primarily. Then on to the red barn to show me the storage and stacking of the lumber and posts resulting from the milling team. While out there, we went into the hay barn (after shooing out Dawn). Didn’t see her bambi, but imagine it was close by. John wanted to show me a box he said had a photo packed in it with Fondue pots, meant for Sonja Willitts, on their next trip north from South Lake Tahoe. Before that handoff happens we have to locate the box of shot syringes meant for the Lake Tahoe Wildlife Care in South Lake Tahoe, where Kevin volunteers his veterinarian experience. Some photos of this walk to follow in next week’s blog.

New flight with Maria Langer (pilot), posted 7-5-20. Overall description by Maria: a tour of the Columbia River Valley downriver from Wenatchee, WA. This is the 7th part of our 2nd flight together and we start just downriver from Wanapum Dam and head upriver, making our way back to Wenatchee. Along the way, we make a detour up Rock Island Creek and over Badger Mountain before landing at the airport. The nosecam footage is stunning and Nick points out many geological features along the way. This is the last (and longest) part of a multi-part series.
Places mentioned in this video: – Wanapum Dam and Lake – Sunrise Highway – Frenchman’s Coulee – Gorge Amphitheater – Mouth of Lower Moses Coulee – Rock Island Dam – Rock Island Creek – Badger Mountain – Pangborn Bar

Today is Dee Eberhart’s 96th birthday! We met in 1988 at CWU.
We went to Joanie Taylor and Ken Matney’s house for our invitation to a celebration lunch of Tuna Patty Melts. She served it with Cole slaw and beets, and two pies for dessert: Mincemeat and another new creation cream pie with strawberries and plums.

Go to Super 1 for eggs (special 98₵, only one allowed, for 18 eggs). John also bought ground beef at a good price, and other stuff I don’t yet know about, except I think potato chips and Frito Scoops.

Kathy Williams-DeVries is on tonight at 5:00 p.m.

Here is her playlist

Guess we didn’t do much today other than the usual. 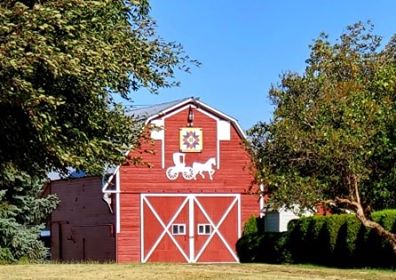 Barn is on S. Willow St, photo by Barb Bailey with permission. She posted this on Kittitas County Visual Delights.

I’ll end with this: 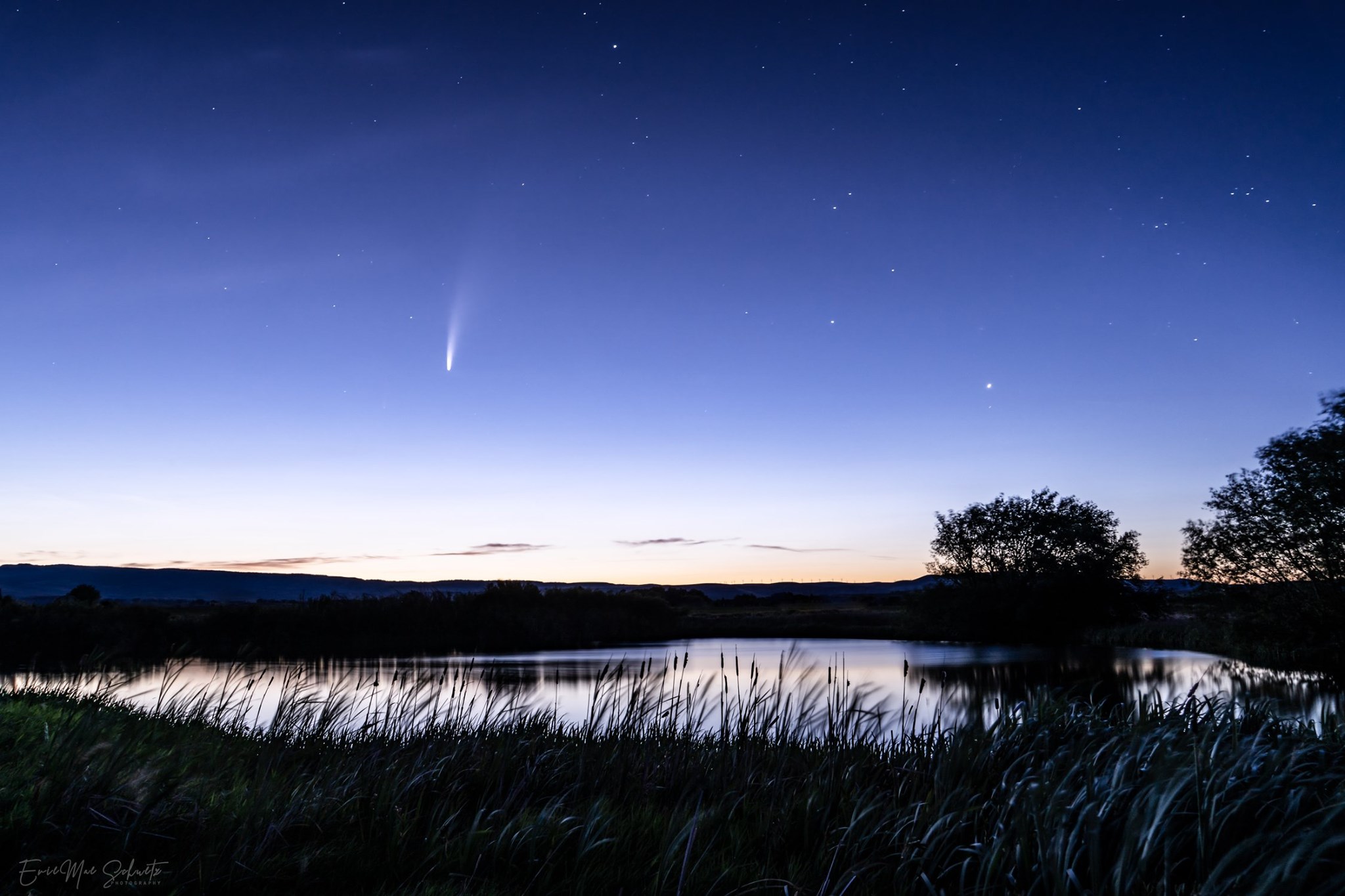 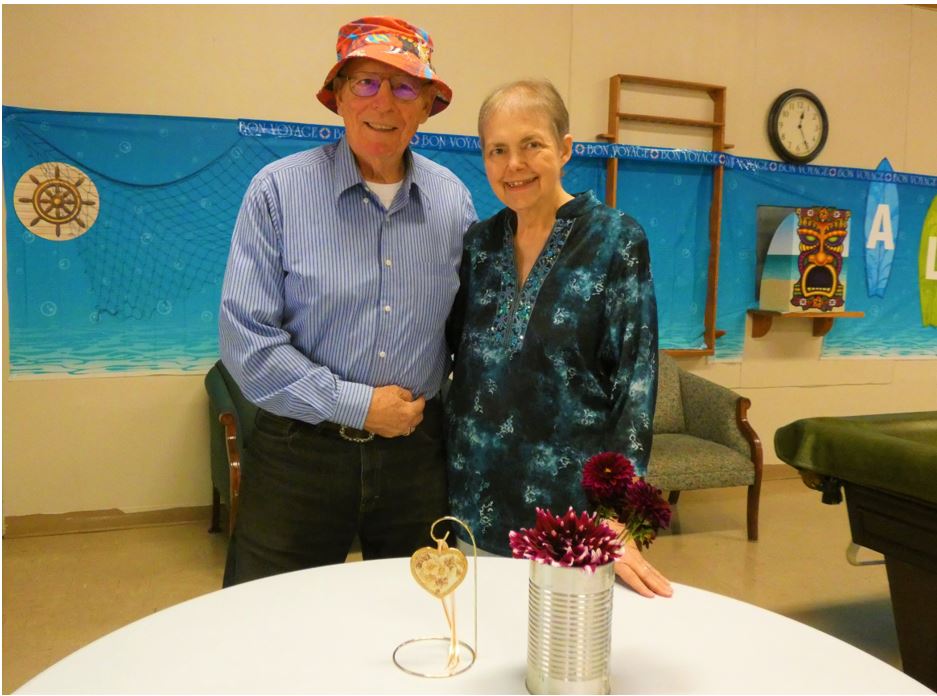 Taken at the Senior Center last year – explanation in link below.

John’s back in the house fixing our brunch. He watered pine trees along the driveway. Brunch was an anniversary special. 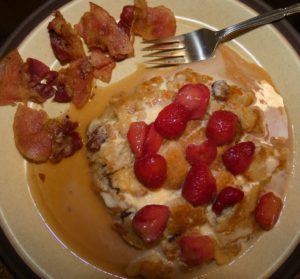 Mine had a little too much maple syrup on the pancake, topped with cream and strawberries, and bacon on the side.