Starting this week with photos of the trusses over the walkway to the house (lasted all week and still in progress).

This is Nick Zentner’s last week of this series of lectures from home, livestreaming on YouTube. We made it through this week to Sunday’s Craters of the Moon presentation. Nick’s trying to tell us the cherry crop is doing fine. 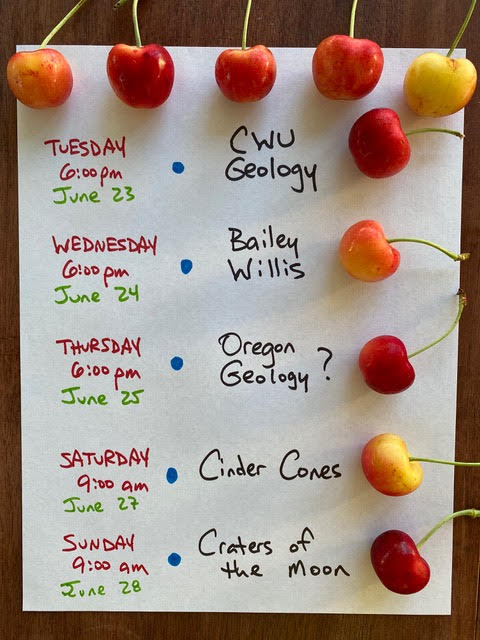 Up at 7:30 and took my Alendronate on an empty stomach. Plugged in my 5Tb external backup drive for its Noon backup.
Here is some progress on the remodeling of the new room, with laying, grouting, and gluing the tile blocks.

Left view through an opening that will have a swinging door to enter the utility room. Water tanks are there but the refrigerator, freezer, and shelving are yet to go there. The tile has not been cleaned yet, but you can see in the foreground and along the right side the “backer board” on top of the subfloor. Right view, with water units of the right, and 2 panels of wildlife (deer, geese, turkey, rabbits) and a few other historic farm scenes. These panels are sort of “busy” and are only on one 8 ft. wall and the one behind the camera. This wall has a door to the outside, and the electrical box – so it is only about 60% paneled.

John drove me to town 10:30, first to the AAC to deliver a donation of books to their library and to give away older ones in theirs to neighborhood street libraries of which we have quite a few. Our downtown library is closed for COVID-19 reasons and so is the AAC (Senior Center), so their donation box is in the front of their building in the parking lot. We dropped off several books, and visited a bit, on our way to more shopping.

I received a phone call regarding my 2020 Census form we supposedly received several weeks ago in our mail. We never received it. So the fellow on the line, working for the Census, but living in Roslyn, WA told me I could fill it out on line and he would help me through the process. It’s not as straightforward as it should be. However, it is an alternative to having them deliver a person to get the information, and I had a computer to access the site: My2020census.gov. I started the questionnaire and he helped me complete the procedure, which took 24 minutes!! (I put my confirmation # assigned through email for submission in my pictures to add to my Tax 2020 folder.

We lost our electricity at 3:54 PM – system wide for PUD customers, with no prediction of time to regain it. Great! I’ll likely miss tonight’s Livestreaming, at least part of it. I’m sure the pre-show stuff has already begun. Outage lasted 3 hours !! [John says they almost always fix it in under 4 hours.] and I missed all but the last 20 minutes of the live lecture. At least it is available for replay.

Entered new people into the study group data base. Need to finish the readings for tomorrow night’s lecture and send to the study group.
Go to bed asap to get up and leave by 7:40; driving my car.

Leaving for White Heron at 7:40, take computer laptop and power supply. I dropped John off and then I went to East Wenatchee COSTCO, another 22 miles.

When I got back to the winery, I took a few photos & some videos of the process. I’ll just put in a couple of photos now. I don’t have time up check the videos and see if they are worth uploading. So, if they’re good, I’ll share in a future blog.

Erik, Ray, John, Tanja, Cameron. Very left Erik upends boxes of new bottles and sets them under the fillers. Ray takes full bottles off the line and places them one at a time in the corker. John snags them from the corker and places them on the table to his right. Tanja places heat-shrink caps, then passes the bottles to Cameron who is running the label(s) applicator. Wine, in clear bottles, is Rose’ of Syrah.

I came back and worked on my laptop for about an hour until they finished. Then we went outside to enjoy lunch. We didn’t get away and back home until 4:00 p.m. Returning, we talked with Ethel (102) from the car, for about 20 minutes, until we had multiple basalt cliffs around us.

The evening presentation, actually the early commenters, was about to start.

Tonight was a musical tribute to Weber by our friend from Australia in the Nick Zentner study group, who gives a presentation on Nick’s nights off. She’s going to continue the musical interludes on the same days, in Nick’s absence. (Mondays and Fridays).

Kathy Williams-DeVries from Brisbane, Australia
Tonight’s was Weber Music, via her previously playing on her clarinet, which she no longer plays much, because she now plays her recorders.

Tonight’s sunset was striking and we missed it because of all the trees on our west side of the house. These photographs were taken by a former graduate student for whom I served on her Thesis Committee (after I retired). Her thesis documentation: Evans, Jennifer. 2012 (Spring). Incorporating LiDAR and GIS to Model the Presence of Gullies at Yakima Training Center, Washington. (Huckabay). She works at the place where she completed her research. YTC – US Army
She lives across the street from our local hospital, and it is viewable beneath the skyscape. She took these with her phone!! 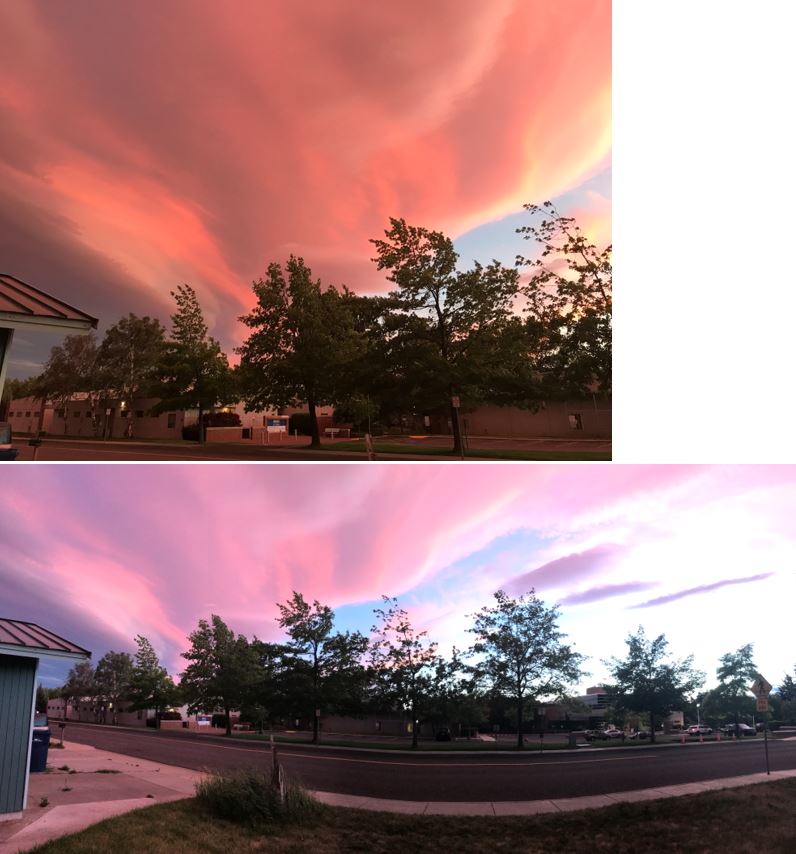 I was up earlier than wished with cats, first at 2:45 a.m., instead of coming in the doggy door, Czar went to the window and meowed, loudly enough to awake me. Back to bed. At 4:00, outside cat Sue started meowing loudly and had brought a mouse to the front door to offer me. I didn’t want to be awakened for that, so went back to bed. Finally, awoke at 7:15 a.m. Began the ritual for taking notes of the pre-show comments that start 2 hrs before the program. We knew the program would start early tonight, to allow Nick time to thank people for gifts from around the world. Farthest this morning came from Japan. Some unique & artistic gifts. Tomorrow is going to be a very special morning, and probably a tear jerker. Watched Nick’s penultimate livestream for this session.

I had things from COSTCO for neighbor Louaine. Her place was the first stop and then on to town for several things needed at Bi-Mart, Mid-State Coop, and Safeway. We went to Safeway primarily for sales of PowerAde for me and their brand of Colas for John. Also on sale, we got bananas, cherry, and peach pies. We went to Safeway primarily for PowerAde for me and Colas for John, both on sale. Grain for the horses at Mid-State, dog food at Bi-Mart. Bi-Mart clerks and shoppers were 90+% into the face mask thing. At mid-state Co-op it was more of a some-had thing. Some customers had masks and none of the clerks did. No plexiglass in sight either. It’s sort of an open-airy place with much happening outside. Our governor wants us to pay $100 if we don’t wear a mask in public settings.

I am working on the suggested links to send for tomorrow morning’s Nick talk on Craters of the Moon.
We had a nice conversation with our sister Peggy who is 3 time zones earlier. We kept her up late tonight.

There appears to be only one person in the area with a traveling milling machine (band saw). 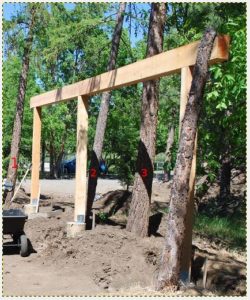 Jason Ireland, and co-worker came late morning and stayed to about 5:30. They cut our pile of logs into 8 ft. sections and stacked them for tomorrow’s make-lumber session. John also had them take out the 3 Tamarack trees that remained – close to the future car-park. Note that the closest tree is dead and cut off, and not in the way.
.
.

The final Nick presentation for this series ended with the highest I saw of 1,584 people watching. There will be a hiatus of unknown duration.
To say thanks to Nick, one of the presents the group constructed was a world map with icons at the location of all viewers to watch his livestreams. Also there is a map of the United States with better resolution.

This final program lasted 2 hours. Longest and most attended lecture since March 17, 2020, when Nick started this series.
You can skip through a lot of it and enjoy many different things about the Craters of the Moon National Monument on the Eastern Snake River Plain of Idaho. Be sure to watch the videos in the “cozy fort”.
‘Nick from Home’ Livestream #75 – 6-21-20, Craters of the Moon
Most importantly, look at 1:52 minutes in near the end to see the whole gift book of pictures from a bunch of his viewers. 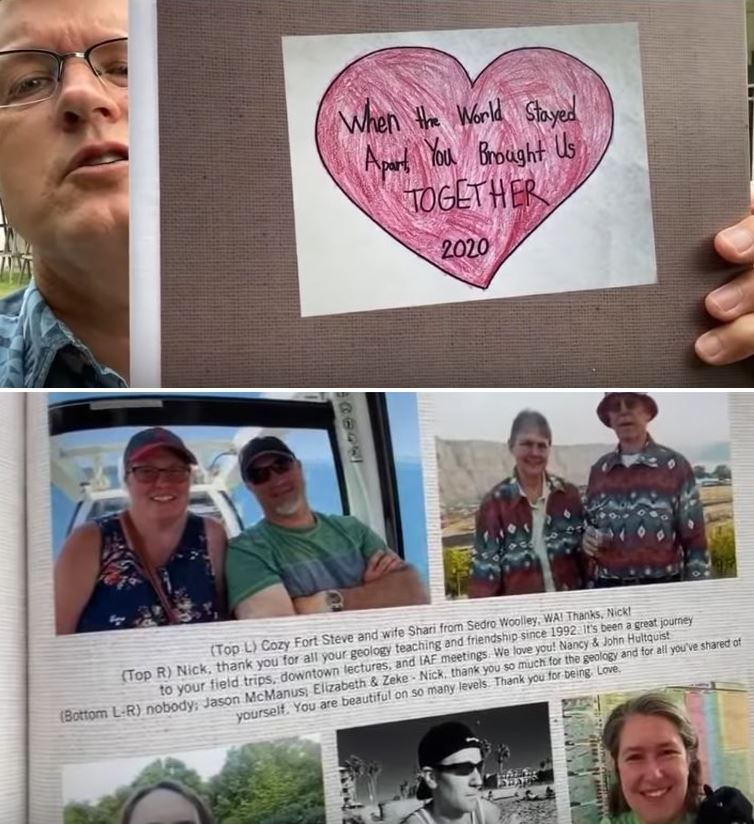 Top is Nick Zentner with the front cover, a painting by Patrick Swan, a 6 yr. old student who was always at the front of the class with his questions of Nick at the end of the lecture. His mom is Theresa Swan, who with the help of 9 others, put this book together in a very short time, and a lot of work. They constructed the maps above too. The bottom photo has friends from Sedro Woolley, WA (Steve, the crafter of the Cozy Fort), John and I at White Heron Cellars Mariposa Vineyard overlooking West Bar, where the Giant Current Ripples are that we had a livestream field trip to a week ago, and in the bottom right is Elizabeth and her pet rat, Zeke. She was raised in Eastern WA but now lives in Cardiff, Wales.