John took me outside to see a baby deer in our garden. I got two pix before it jumped and scurried off. I wish I’d reacted fast enough to start a movie of the exit. Another deer has been hanging around, who was a twin born here in our barn. It was late in the season, and we thought the female twin was not going to make it through the winter, so we started feeding her and her brother. We named the twins, and Dawn is still hanging around, but she’s never had a baby. We wonder if she is the mom. A couple days later we saw them together, so now we know.

Here’s a beautiful scene from the Kittitas Valley, our nice agricultural irrigated valley in the shrub steppe semi desert: 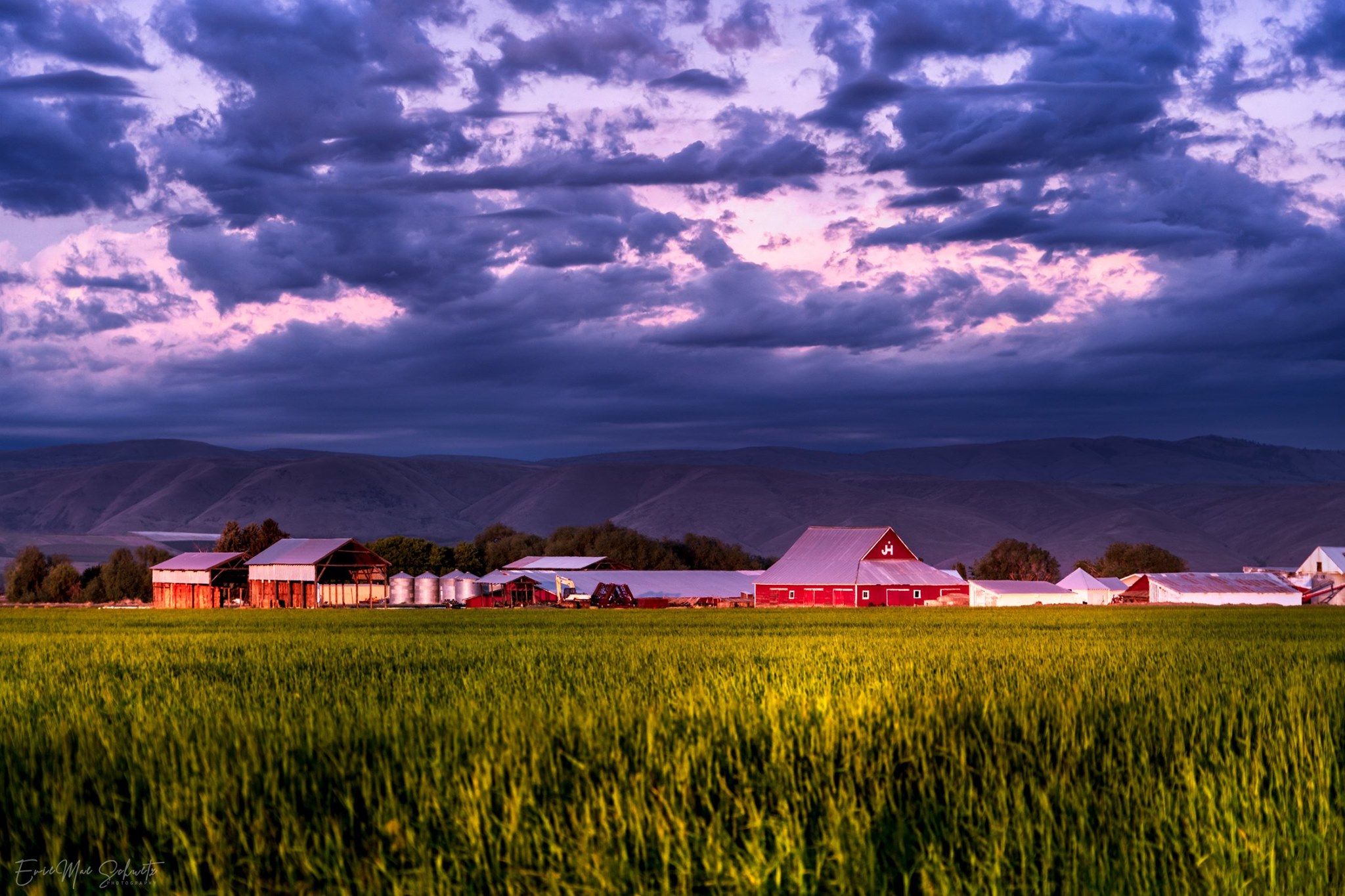 I’ve been emailing catching up on two days away from my computer (my life-line)!
Supper. Lasagna, pears, and cauliflower. 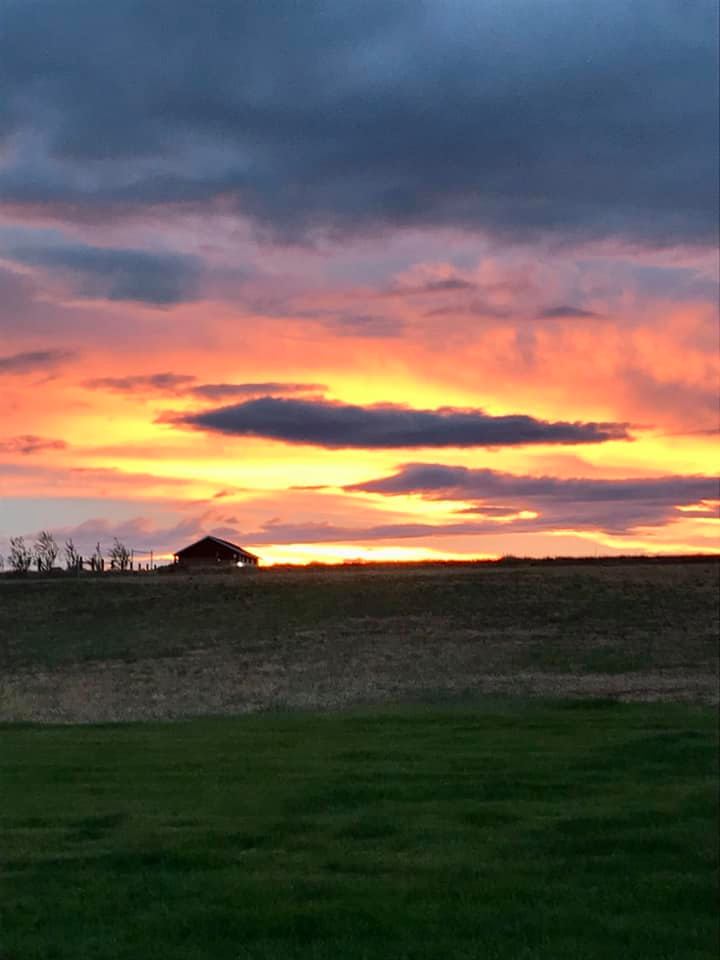 Nick Zentner’s entering the penultimate week of this series of lectures from home, livestreaming on YouTube, with the first tonight. We made it through this week to Sunday’s Yellowstone Geology lecture. 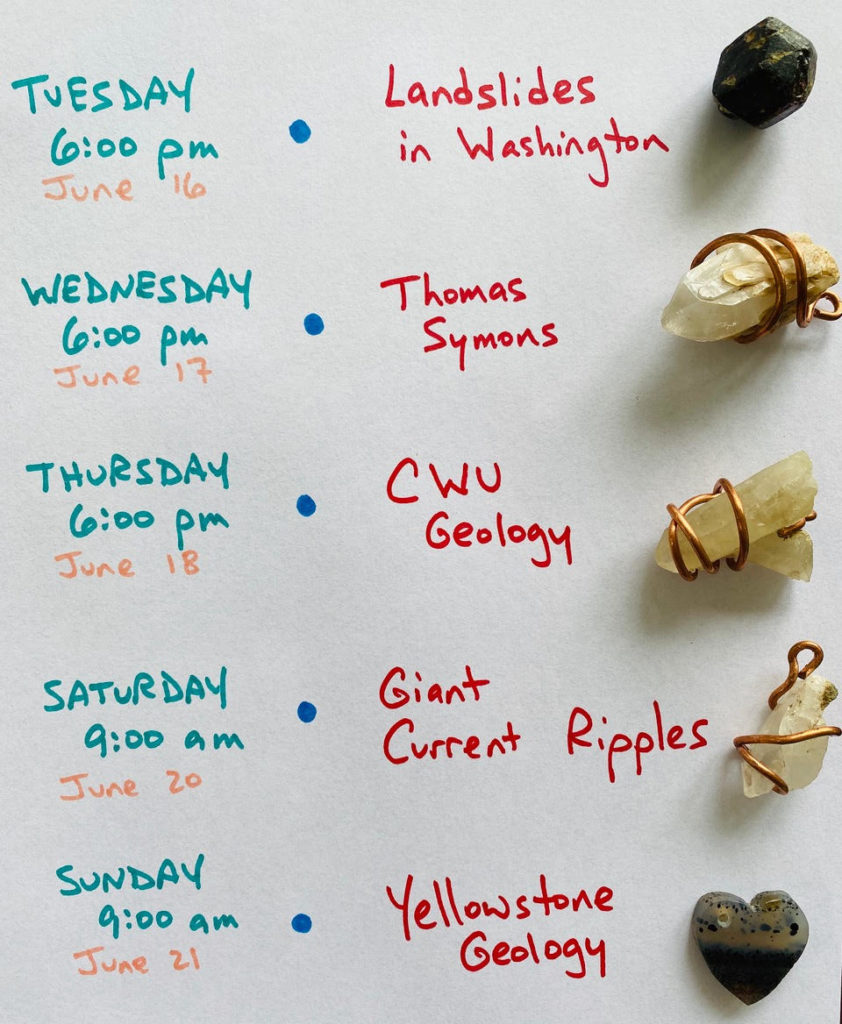 I took my Alendronate on an empty stomach and ate a half hour later. Started checking with CWU library looking for access to Library Archived Faculty documents. I figured out the location of the research on debris flows in the Teanaway that Marty Kaatz did research on, but am unable to gain access because the library is closed. I talked to my friend in the Reference Department and he gave me the email to write to request a scanned copy, from the Archives, but no one there got back to me by phone, or email. Eventually she did. And sent me much information.
I forgot to connect my 5Tb external back up drive for its Noon backup.

Rascal just brought in a Douglas squirrel and took it under the bed. Not too happy about that, but actually would like to get rid of the critters because they get into our shed’s insulation to store their walnut harvest, and make a terrible mess. The walls were not all covered so the stashed nuts have caused some of the batts of fiberglass to break loose. Maybe next year John can clean out this building and make it useful.

Tonight’s livestream is on Landslides of WA and I got my suggested links out at 10:00 a.m. and then realized shortly after that I left out all links to the Oso Landslide in 2014. So, I finished that research and entering the links & description and mailed it at noon to our study group members.

Tonight, Nick will be joined by Karl Lillquist, a physical geographer whom I taught with from the time he arrived on campus in 1995); one of his concentrations is mass wasting issues (debris flows and landslides).

Morning work included John and Walter bringing in the water softening unit and holding (pressurized) tank. We were supposed to have water back today around noon, tried at 12:30 p.m. and it was wired wrong. Sparks flew when the circuit was switched. The pressure switch is comprised of an internal spring mechanism which is connected directly to electrical contacts. Walter is a builder, not trained as an electrician or plumber. When the sparks flew, the contacts fused so a new pressure switch was needed. A “smart phone” photo sent to the real electrician, Todd, allowing him to bring the proper switch. He was able to come at 2:30 and we had water by 3 PM. I was very thankful. Six days without running water has been miserable. We always have filtered water in 2 L. bottles, and John carried irrigation water for flushes. Just above the level of wilderness camping. Well, we have had electricity.

Things got changed this morning for tonight’s lecture, so I had to create a new list of materials to send for a different lecture. I had material for a trip to the Geology Department at CWU, but Nick changed it and went instead to the Thorp Prairie on a field trip. I worked until 2:00 to find background material.

I had to plan to be ready to take photos of the raising of wood beams (trusses will sit on these) over the future walkway. Because the structure is angled, actual measurements could not be done until the roof over the “header” was removed. The initial estimate was about 9 inches off and the beam that much too short. A new one will be cut (in EBRG) and ready in the morning. [The just-a-bit short one will be used over the back patio.]
Meanwhile, look below in John’s Friday column, Not So Nasty News, and see the photo of the beginning of the walkway. Note his “nasty” comment about me and the dog. She’s really the one avoiding it because she fell off the original version into the hole mentioned. I was walking the plank fine.

Filled up my meds for the week.
We had pizza for supper.

I really got into this, and found these videos below to entertain yourselves as they did me, all the while learning.

Recovering from a sleepless interrupted night (with cat demands, mostly), after being up late working on projects. So I slept in until 9:00 a.m. (except for normal 5:00 a.m. issues).
Now working on more unfinished projects. John’s outside.
I went out to take videos of lifting the first beam for the walkway cover.

Tonight was a musical tribute to Mozart by my friend from Australia in the Nick Zentner group, who makes a presentation on Nick’s nights off. She is a clarinet player for the longest part of her life, and included that at the beginning tonight, but mostly we have heard her music on her collection of recorders.

Tonight’s was Mozart music, with her explanation of the instruments played at the time, combining a performance by a large group of men on the instruments of the time period—actually she provides the complete playlist with titles & links in the descriptive part of the video below.

I left this music after about an hour to have a phone conversation with a University of Idaho friend since the 1970s. John and I met Bill Rember (Paleogeologist) almost as soon as we arrived at the University. He now lives on his own fossil site near Clarkia, Idaho, 40 miles NE of Moscow.

I cannot get access to the video of his talk (48 mins), except through a web page in the archives at the University of Idaho that has a link to the video. His presentation is on the history and description of fossils in lake bed sediments from about 16 million years ago. Once you get to the link, you can watch the video on a full screen and see it a little better. 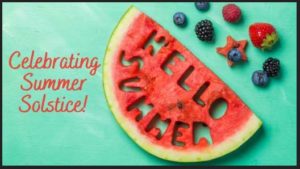 This morning’s field trip to view the Giant Current Ripples at West Bar, began with a thank-you acknowledgment of a gift Nick received from two viewers and admirers (who are wood crafts people). Here is their unique gift.

Nick on top with his rock hammer 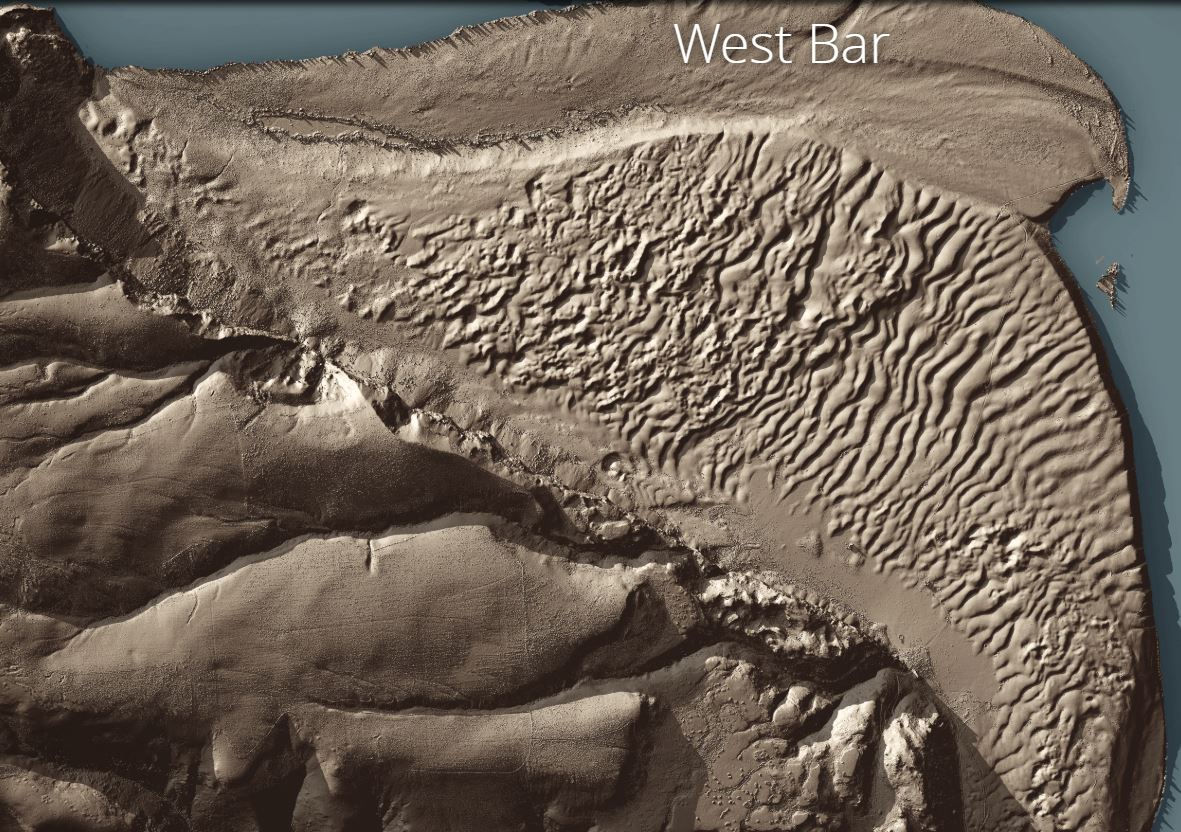 LiDAR image of field area reported on this morning

Lunch: Soup for me.

I am working on the suggested links to send for tomorrow morning’s Nick talk on Yellowstone Geology. Sent late afternoon.
Walter came over and laid a bunch of tile in the new room. Need to check it out, tomorrow. Have a few pictures for later viewing.

This morning’s video had the highest number of world-wide watchers that we have seen (1,434). This one went 115 mins., which is the longest.

After it was over, I finished adding dishes I’d started last night, and turned on the dishwasher. It was still running, when John left for town to get some groceries at sale prices, and to pick up steel washers needed for a garden gate.

When John got home, I had my lunch of Top Ramen soup with chicken & Cheez-Its added. Now to work on the blog. I started working early afternoon, and now it’s late afternoon, with little accomplishment. My Chrome keeps hanging up and crashing – very stressing.