Today, we had an unexpected visitor..

John’s photo. Particulars of size, age, gender unknown. It is not little. Neighbor Allen has seen one recently and it compares with a large one killed (2019) up on the hill north of him (and us).
A couple of days earlier, our small-bird-enclosure was scrunched by a heavy object that left black hairs on the top fence cover of the feeder. We have a square of 4 chain-link panels, 6’ high, and inside that there is a small enclosure for small birds. It is made of wire fencing with 2″x4″ spacing. John figured there must have been a bear involved.

Our neighbor, Allen Aronica, a mile up the road, has seen two – one big, one small. The big one is estimated at about 500 pounds. With no experience on such matters, John thought this one was about 200 pounds. Oh well.

Morning started earlier than desired. One worker arrived at 7:10 and the other followed shortly, only to turn around and leave again until 8:00 a.m. Now they are back and arranging what will happen today. Construction continues. Walter just arrived with concrete to unload and he’s leaving for a west side medical appointment. They have 5 (?) projects they alternate on. Paint takes a day to dry. Concrete about 3 days of curing. Here there are both inside and outside projects, and no rush, and that helps them. Today the skylights are being finished in the living room and the den. Gives the rooms a different look and feel.

It is a bit noisy, but I’m working on Spokane Geology suggested background for Tuesday night lecture. I just finished sending the invite letter and stuff to the new folks on the Zentnerds list.

Soak dishes. Just spent a lot of time, loaded the dishwasher and started it. John’s been dealing with the contractor and worker about the walkway out front and plans for putting up the rock wall siding, and now I’m back to alternate working on stack of receipts on table left of my chair. All to be cleaned off to access the patio door that John installed (Nov., 2015), and walls on either side. We have 2.5 sheets of wood paneling still unused. That and a bit of knotty pine will finish the inside of the door project. That’s a long time between concept and completion. Soon, though.

I washed clothes at some point, and move paperwork from the left table beside recliner. I then called the public health department with question about the Ensure mess analysis.

Lunch break: Beef chili for me (with our crockpot beef from a couple days ago), and hamburger with his chili for John, with fries.

We made it through all the livestreaming lectures planned for this week. 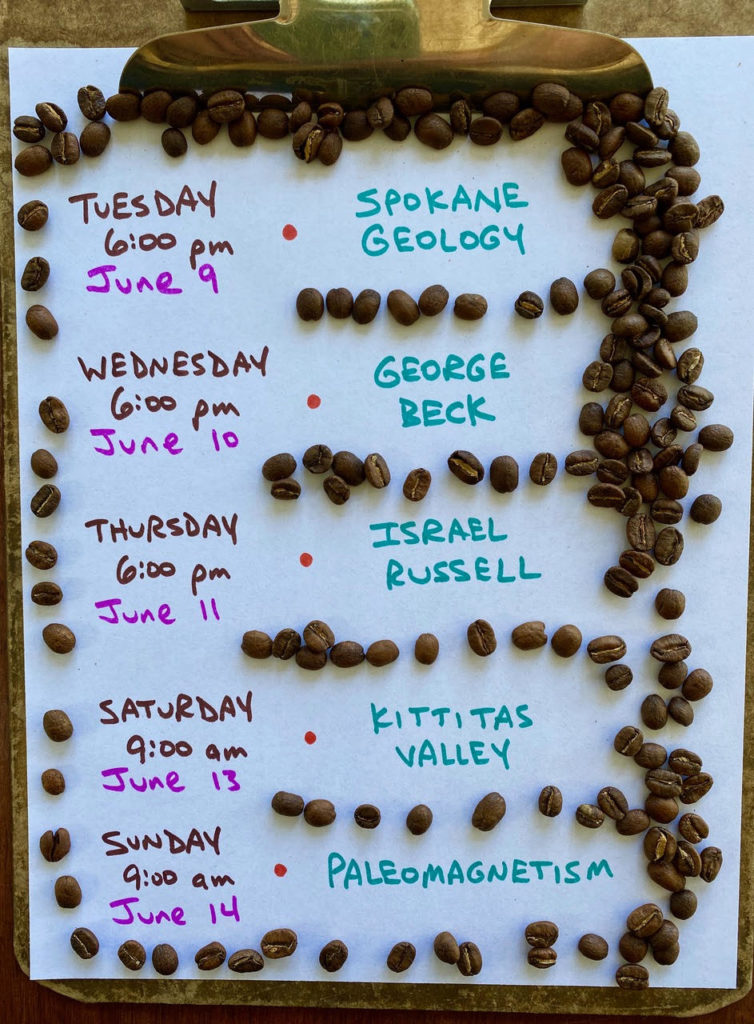 A second and different highlights video:

Strange supper. Baked potato with cheese & blue cheese dressing, corn on the cob, and I never got my peaches and banana or chicken. 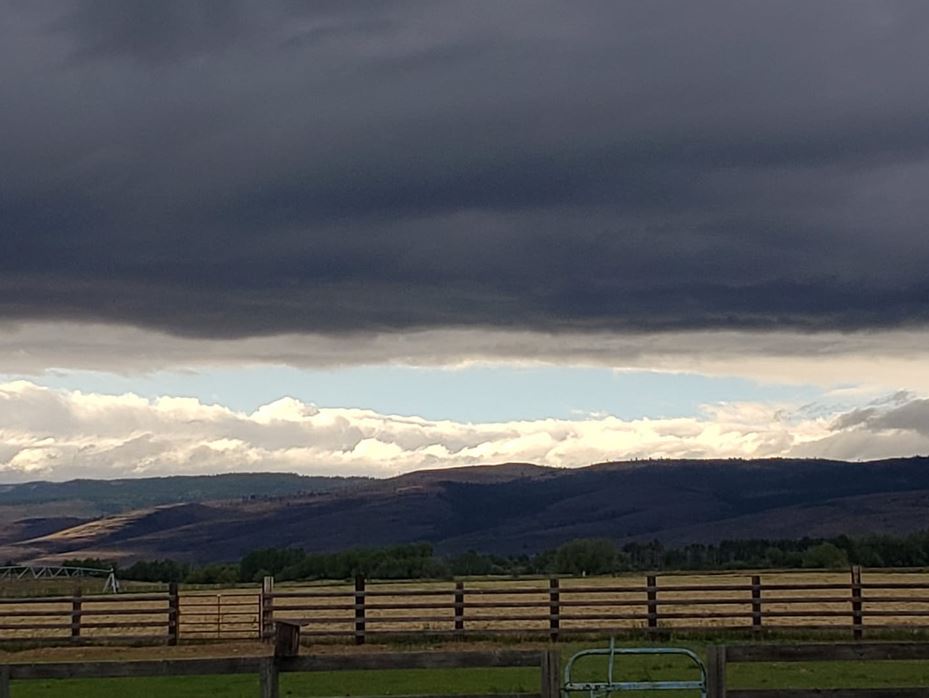 Speaking of Herons (symbol of the wines from the Mariposa Vineyard), the next photo is from White Heron Cellars, of our loaned piece of equipment to work in the Ice Age Floods sands. Locals know of the deposits in places where the massive flow of water backed up. Names here are the Moses Coulee, Trinidad – the hill of land-scam fame – and the West Bar on the Columbia River.

The view, looking south, is backed by the Columbia River, and top right over the backhoe is the sandy West Bar with Giant Current Ripples.

Watch the 3-minute video explanation of the Ripples:

I took my Alendronate on an empty stomach, and was awaiting eating a half hour later, when Walter drove in the driveway to check on the last skylight above my head in the den. It needs some re-adjustment. That visit took a lot of time, so I was late eating.

Worked some on the Jobslist follow-up sends today which I have ignored a few days, until last night, which generated some more work to do as the administrator of the Google Group (since the early days of Bitnet)! I send out job announcements covering many disciplines to >800 people in about current worldwide jobs or internships. (The list is called NW Geography Jobs, but covered are Geology, Anthropology, Biology, Meteorology, Conservation, Environmental Studies, Political Science, Urban Planning, Government jobs, Outreaches, and more). Contact me for an application if you are interested.

Tonight is a field trip to the Ginkgo Petrified Forest to talk about the founder of the State Park, 30 miles east of us at Vantage, WA, and 20 miles south of the previous photo. 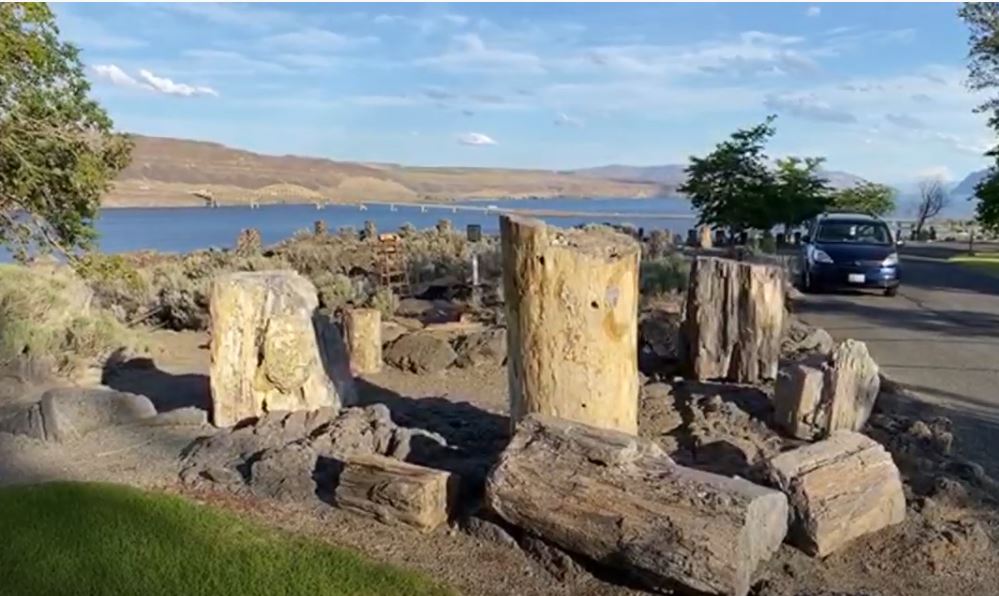 Bill Rember, one of our early friends when we arrived in Idaho in 1974, is a fossil geologist and interested in this material.
I will call Bill afterwards and send the background links readings for Nick’s presentation on Israel Russell.

I went to ComputeAbility at 10:00 for David to fix my broken computer. I was supposed to pick it up at 1:00 p.m., but it took until Friday evening to get it home and set up to use it. I’ve chased John away so I can use that computer – tower, Intel Core i7, and 2 nice screens. Decent speakers. Only problem Nancy had was the software is totally different from what’s on her laptop. 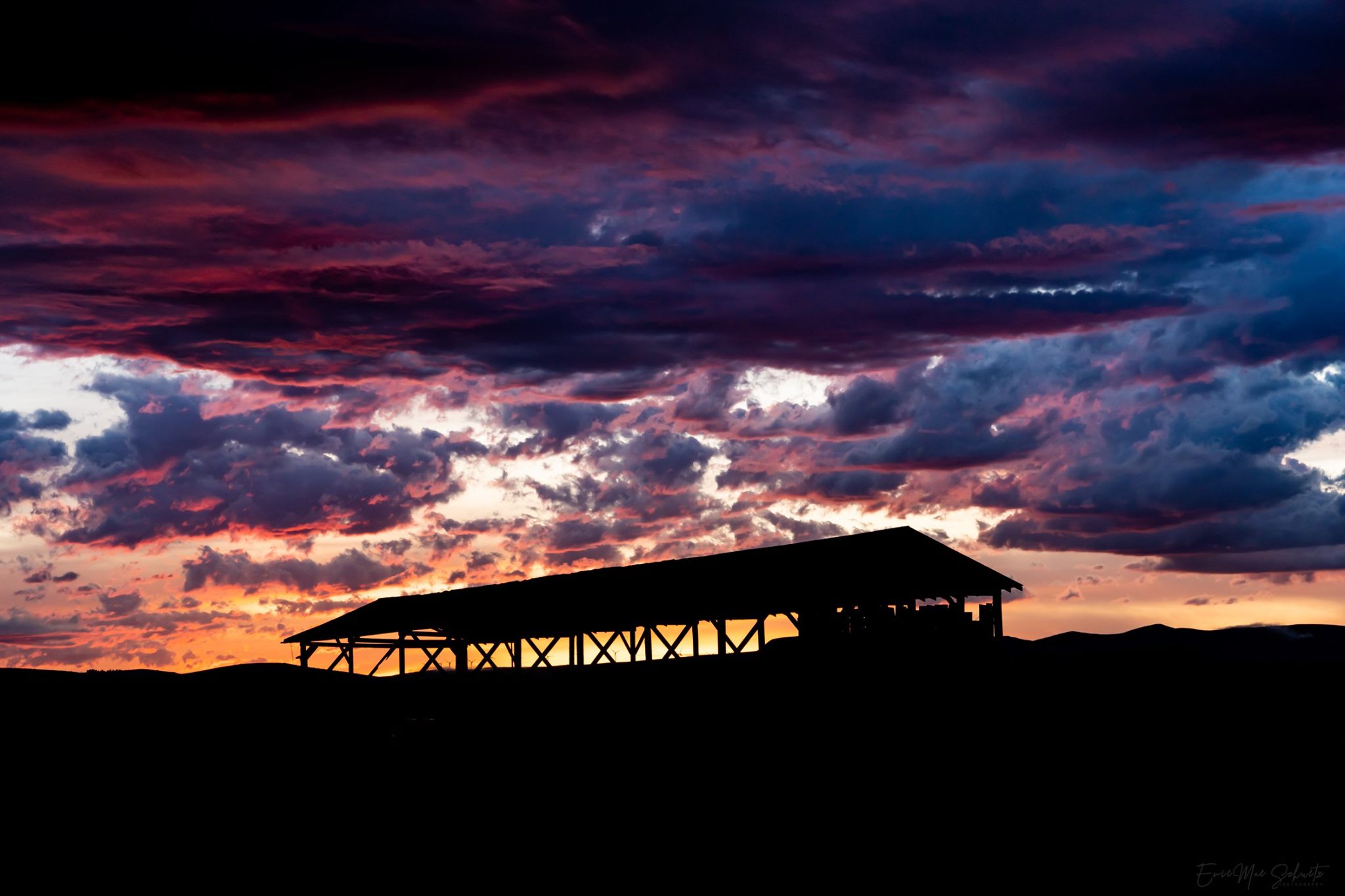 Sunrise after the storm–5:04 a.m. east of Kittitas by Evie Schuetz

Started out the busy day with interrupted sleep every 2 hours. Thunder and lightning, again 2 hours later, with more rain hitting on the skylights and metal roof outside the window, waking me, then cats wanting something to eat at 5:00 a.m. I went back to bed for 2 more hours and got up, tired.

Tomorrow we will start the part of the remodel that has us without running water for a few (4 ?) days. All the water cleansing pieces have to be moved so the wall can be patched and painted. The stone-faced tile of the floor gets glued on, with a 24-hour curing time. The grout goes in between the tiles – and that needs 2.5 to 3 days of curing. So preparing for that was a large part of activities for today. Over the past month, John has been filling 2 L. bottles with filtered water.

I washed clothes and dishes. I had a nutrition drink early to tide me over, until lunch, which we never really had. Just 2 Reece Peanut Butter Cups.

I had originally planned to be at ComputeAbility around 10:30 to pick up my computer that had run all night cleaning off the disk, and backing up our information from both laptops – the current one I got in 2016 and the prior one (backup of the prior one was already on the current one). Unfortunately, it still had at least 4 hours to complete the clean-up and back-up onto our new 5 Terrabyte external drive. Yet, I did not get a phone call until 6 hours later (4:00 p.m.) to drive in to get it.

I squeezed in a haircut around our rural block with Celia (who has cut my hair since I arrived in town in 1988). She is my neighbor and retired from the Band Box Beauty Salon, quite a few years ago, but she has continued to cut my hair at her house. I was quite shaggy today.

I’m very pleased with the results of the computer, just very sad it took 2 days. The charge was only $84 plus some cents. The business gives a 10% senior discount on the first hour of labor, and David the technician, did some fancy planning and also set it up to transfer each week (at Noon) a backup on the external drive (5 Tb) of anything added since the last image was created. That will protect my contents better than they have ever been previously. I couldn’t be happier. I now have 179 gigs of space on my C drive, and I am going to pare down a bunch of extra stuff in my documents I know I can get rid of, and change my procedure on creating weekly blogs, not to duplicate materials from the previous week that remain the same.

I worked hard last night on John’s computer to watch Nick’s live streaming and make captures of most of the pre-show comments, plus get suggested readings ready for tomorrow morning’s broadcast on the topic, Kittitas Valley Geology. I was able to send those last night. Good thing, because of all I had to do today, and no computer.
I also had other errands to run in town when I went for the computer.

Tonight’s was Renaissance Relaxation, with her explanation of the instruments, and a created (and shared playlist) for all the music of the evening.

Supper was a cheese burger with fried onions, baked potato, peach & pear slices, and I suspect ice cream for dessert to settle my stomach.

Get on my new computer for capturing comments and conversation around the world at 8:00 a.m. Maybe I’m not back. High winds all night continuing to take away Internet—I may not have connection this morning for livestreaming. I made it through but lost the comments for the live chat streaming. Got knocked off several times before the actual Nick talk started.

Lunch will be a grilled ham & cheese sandwich with PowerAdeZero on the side, and maybe chips?

I am working on the suggested links to send for tomorrow morning’s Nick talk on Paleomagnetism. Sent at 2:30 p.m.
Took some photos of the utility room walls set up for painting yellow. Now coated with texture and the primer.
Existing with no running water in the house is not a lot of fun, but we’re managing and should be okay for the next week. We are eating meals off heavy-duty toss able paper plates.

Below is a nice musical melody by a group from Atlanta, GA which was played at the end of the livestream above, and which was enjoyed by many of the >1,000 worldwide viewers this morning.

Lunch: I had chicken noodle soup with Cheez-its.

This is not a happy story about COVID-19: