Beginning with a sunset from April 18, 2020, I missed seeing until today: 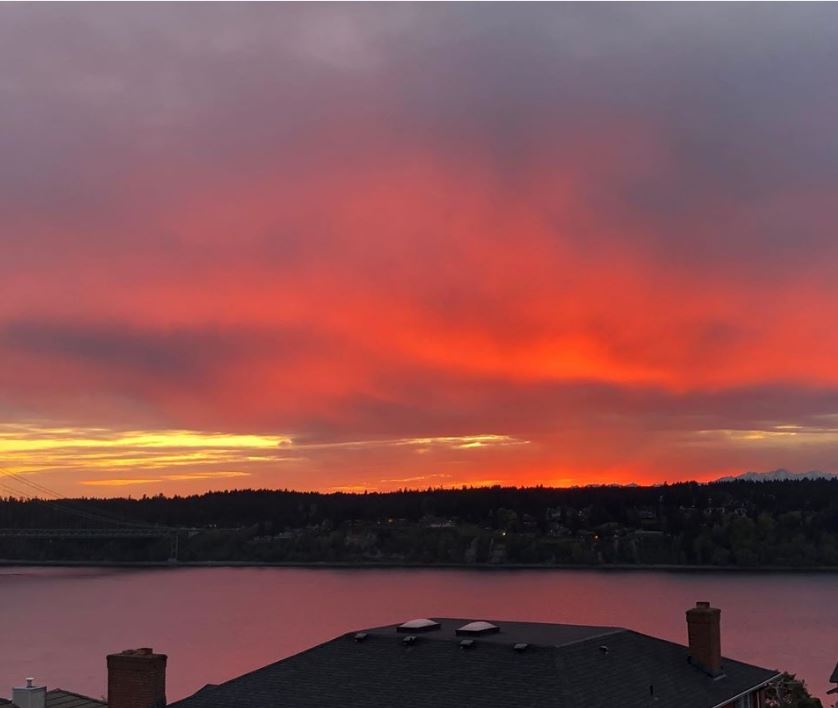 Across the Tacoma Narrows from his home on Tacoma’s “West Slope” area by JW Harrington.
JW is a geographer we’ve known for a long time, and he is a painter as well. All his friends are expecting a rendition of this in a future painting (he’s an artist too).

We left before noon today to drive to town to pick up lunch at Burger King, find a shade tree, and eat. That was not a good idea. We got there in plenty of time but everyone is having to go through the take out window, and we were 9th in line. We had called in by phone to have them throw the Crispy Chicken in the fryer. It was to be ready at 12:20. That time came around and we still had two cars in front of us. We waiting much longer to be served. Once done, we ate. I was driving, so I only ate ½ my crispy chicken sandwich, and a few fries, and John finished his Whopper as I drove to McCullough Rd to our contractor’s new house.

John took some photos of the rock siding we will be getting on our house, and he also checked out the HardiePlank fiber-cement siding, which had been written as metal on the bid, but we want the composite for better fire resistance. I videotaped our long conversation about details on the 4 pages of the contract. That took well over an hour.

John and I saw this tree on a neighbor’s property from our contractor’s home on McCullough Road. It is quite aways off and his image (a bit blurred) was only a token. It was useful in calling Evie’s attention to it, as capturing a neat photograph. 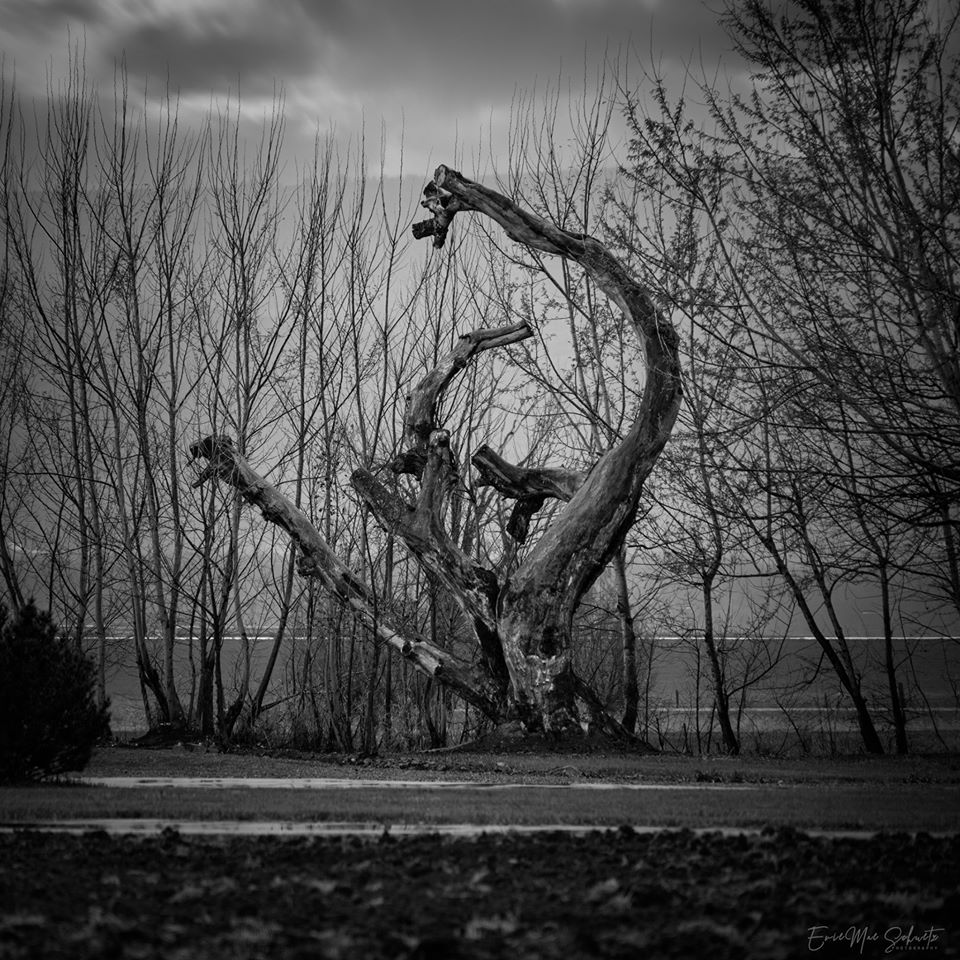 Creatively artistic tree (taken in the rain) by Evie Schuetz.

She published it Tuesday on Facebook and tagged me, but I didn’t see it until late. I showed to John, whose first comment was he was so happy she found it and took a nice photo before it started to fall. When we first saw it, John saw dinosaurs, and I saw giraffes and then I saw the dinosaur. Interesting how people interpret images differently. Neither of us can see a crab in there that some others see (including Evie), but now that she explained it to me, I realize John and I never watched SpongeBob SquarePants to learn of The Krusty Krab and the Krabby Patty. I need to drive by the home on McCullough Rd, figure out who owns the house and the tree, to get their email to show them the picture. It is a unique photograph. Nature is artistic. Evie took this on 4/22/20.

Finally, we left and drove back across town to get to a road off the Old Thorp Highway. I needed to pick up a freely given pair of Sketchers shoes (found via The Free Box site). I was on there recently to list something I was giving away, and saw the announcement.

Called Gerald on our way to Thorp. It was just 3:04 when I called. He was outside, on his lawnmower and visiting in the shade of his garage with his kids. We joined the party. Our original intent was to pick up a bread making machine he no longer wanted and was giving us. We need to go buy some new yeast and dry milk, and when we get it working, we’ll provide some bread for Gerald. Yeast has followed toilet paper into the netherworld (guess everyone is making bread during this Panic 2020)—see John’s story below in his Friday column, “Not So Nasty News.”

On my way home, John filled my tank at the Thorp Shree’s Station, for $1.39/gallon. Ours cost $1.49/gal because we prefer to buy gasoline with our VISA CITI bank card from Costco, from which we get 4% back. The “discount” actually is summed and returned to us as a check redeemable at the store, as cash. So until we can get there and claim our cash, COSTCO gets the interest earned. The Panic 2020 isn’t helping. We’ve had such a check for a month.

Supercontinents and the Pacific Northwest, Apr 11, 2019

John and I were there ten years ago, for this lecture:

Nick’s livestreaming geology tonight ~ from his porch because of high winds all day. The high gust was 46 mph. 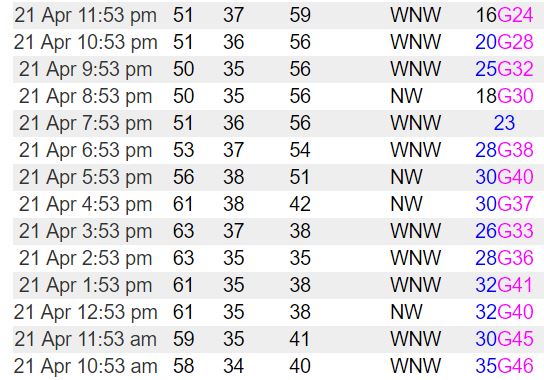 This was our day of rain.

Katrina did two livestreaming SAIL exercise classes from her home this morning at 9:00 a.m., and Friday Noon. 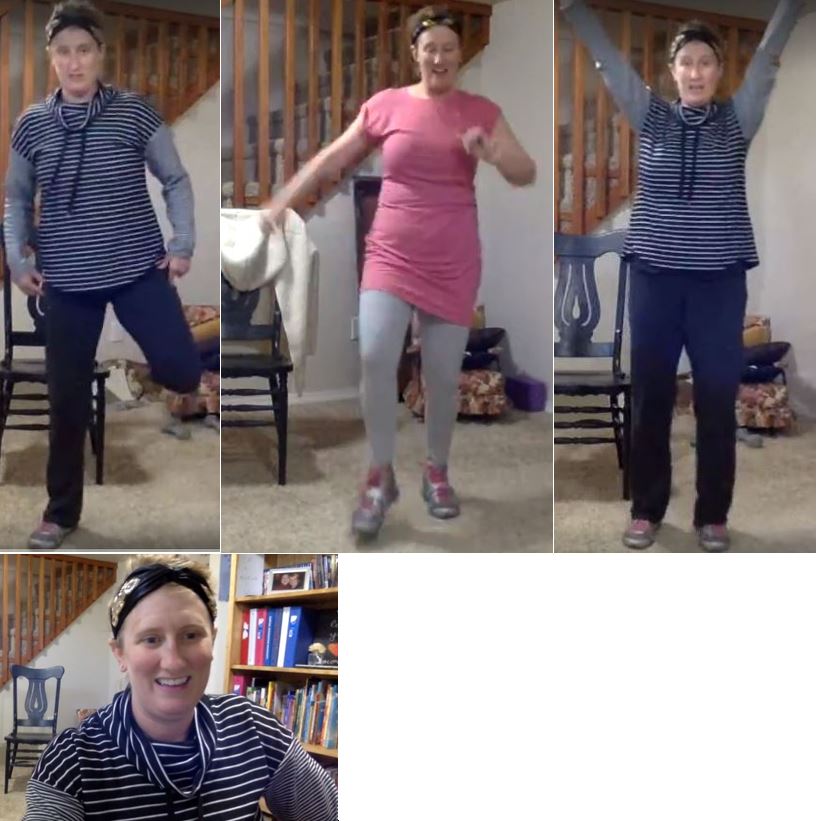 The pink dress was Wednesday and the others were Friday. Bottom she is having a live chat with all the people who are participating. Both were fun days. We had a pretty good turnout both days.

I worked on submitting my COVID Bingo-1 card to submit tonight by 7:00 p.m. to Parks & Recreation. I had to finish before then because I would be watching Nick’s Livestreaming. I’ll show the card tomorrow and tell you the story that went with it.

Morning receipt from Kathy Williams-Devries in Brisbane, Australia, of a new Video she made of Nick Zentner’s first 10 livestreams. These are hilarious. She has followed with a second version of the next 10 that I will list below:

Below is an image introducing the topic for tonight, The Straight Creek Fault (named Fraser Fault in Canada). 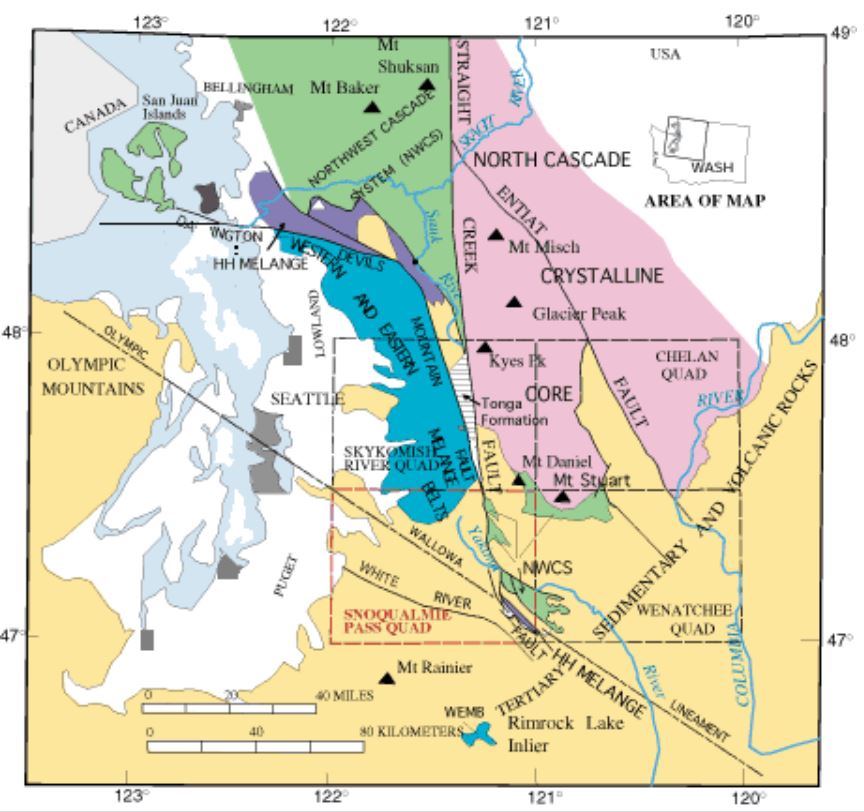 View the geologic fault right down the middle of the image.

I could not locate any viewable lectures and just glanced at a couple of reports by the DNR and USGS, and some stuff on the Fraser Fault (the fault continues into Canada) and the Kula & Farallon plates.

Tonight’s lecture from inside his house, the porch (’cause of rain):

Is it really Bingo if no one can hear you yell BINGO! 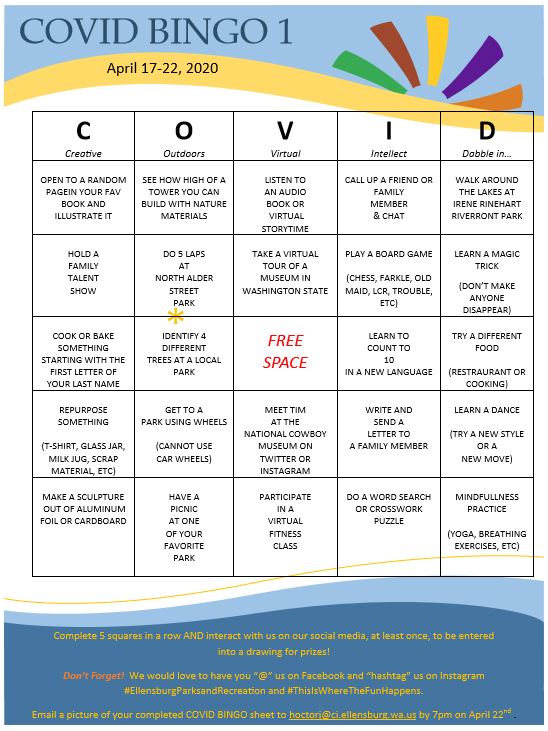 This is the current panic 2020 solution to people who cannot go to work or to community activities. I mentioned it yesterday. I joined the Bingo Party over the week and managed to get a bingo on the V vertical line on the card. I submitted my proof to the Ellensburg City Parks & Recreation office and I received a phone call that I was one of the winners (luck of the draw).

I had the choice of 3 restaurants in town for a $25 gift card. We chose The Red Pickle. It will be mailed to us, and we’ll go by for a take out.

I called my bank about transferring money between accounts online, and figured out the best way to get a certified check sent to our contractor without going into the bank. Good thing they know us both and we have accounts at the same bank. Made it a lot easier and saved money and a trip to town.

A tree fell over the power lines on Thomas Road, near our neighbor’s driveway. The crew for the Utility had to come cut the power off to deal with it. We were not affected until the main line was shut off, but those closer were without power for about 4 hours. Our power went out at 11:20 and came back at 11:52. I left soon to go to Imaging at the hospital for a 12:45 check in for Bone Density and Mammogram tests. I didn’t get back home until 3:00 p.m.

We had phone calls, e-mailing, printing, signing, and scanning associated with cashing out two small insurance policies for John with Northwestern Mutual Life. One was started in 1966 while he was at the University of Cincinnati. His original intent was to take his parents off the hook if he went to his great reward while a poor student. His parents are long gone to their great reward, and I don’t need the cash either, so it is on the way to our bank account, except for some to the IRS.

Nick from his backyard:

Link problems below; John can’t get these next 2, I can. Bummer.
We are searching for reasons why.

The two of our weekly blogs over 2 yrs (2018 & 2019) to connections to Lydia Staisch & Nick Zentner:
See both people below in these weeks on the dates suggested.

No livestreaming video lecture from Nick Zentner tonight; his day off (along with Monday).

Busy all day on projects.
Supper: Leftover cooked canned pork, tomatoes and more made into sauce on spaghetti noodles, with canned pears.

Going to bed to be up early to watch the early morning geology lecture on Geologic time (originally thought it was on Relative Age Dating).

Here is some background you can get to on the web,
For Nick’s Podcast #1 Geologic Time

Next is the livestream, ‘Nick from home’:

These images will partially cover the weekend geology lectures:

John went off to town for shopping at 3 stores. A bad thing happened at the first one. He lost his Costco VISA credit card. No clue what happened to it. Paid for stuff, left the store, went to another, and didn’t have it to pay there, so he used another card, and went back to the first store hoping it had been turned in. No such luck. So, he called me and for over a half hour I called and finally got it canceled. They supposedly will have a replacement card delivered before we will be going to Costco.
Brunch: we had blueberry/pecan pancake, bacon, and orange slices.

To cheer you up today, check out this creative dressing and photography by my friend Evie Schuetz (also a violinist in our music group), she created with her ingenuity and photography of our downtown-homed Ellensburg Bull (you’ve heard about before in our blog). This brings it up-to-date. 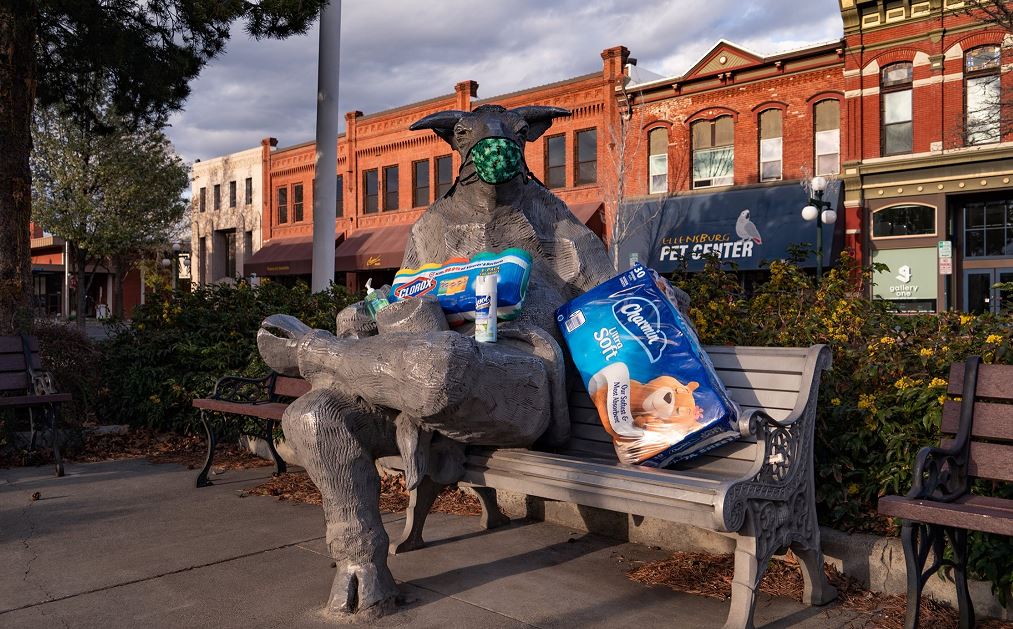 I continued working on all my projects, and John continued on his out in the yard. He alternates among several activities so he doesn’t overdue one set of muscles and later get cramps.
He continued disassembling the rest of the rotted out wooden patio put in front of our house when built in 1981. He mutters a lot about the dumb things the builders did.

Here’s a short clip of near the end of the process today:

There is a follow-up Podcast for today. I recommend going there and to the two preceding it (for Saturday morning’s broadcast, if you missed listening yesterday to the podcasts).
Here is the third Zentner Podcast for background to today’s lecture (by the same name):

And this morning from Nick’s backyard: