We managed to publish our last week’s blog just before noon today.
Here is an appropriate introductory photo for our week of news:

This scene was captured by Evie Schuetz. She published this early today on Facebook. She saw these up close and heard the whooshing sound they make. They were on Hayward Road (off Hwy 10) and it was her first experience under a wind turbine. This is northwest of EBRG. John and I went east.

Last week I tried to get through to the UW Hospital complex in Seattle to get a consultation report on my shoulder sent to my PCP. I thought it had been requested and sent long ago. We were in Seattle on March 11, but when I saw Chelsea on a recent Friday, she could not find a report.

I now have a quality control person (Demetri) who responded from UW but it is still not resolved. The first call was reassuring, but the second call was non-productive.

We left today for town about 10:40 a.m. First stop Bi-Mart to check numbers, but we did not win anything. Then off to pick up sunflower seeds for the birds—2 bags. From there to pick up a Papa Murphy’s Pizza picked out by Kristin Ashley, who was working at the Wild Horse Wind Farm today leading two public tours (about an hour long). We were going to share and visit over her lunch hour.

The pizza had zucchini, tomato, mushrooms, chicken, onions, red bell peppers, artichoke hearts, spicy herbs & cheese, with a red sauce (not creamy garlic) on a thin crust. When we arrived, Tiffany took the pizza back to the kitchen and preheated the oven. After the morning tour, with Kristin back in the visitor’s center, the pizza went in the oven. Photo of the product. 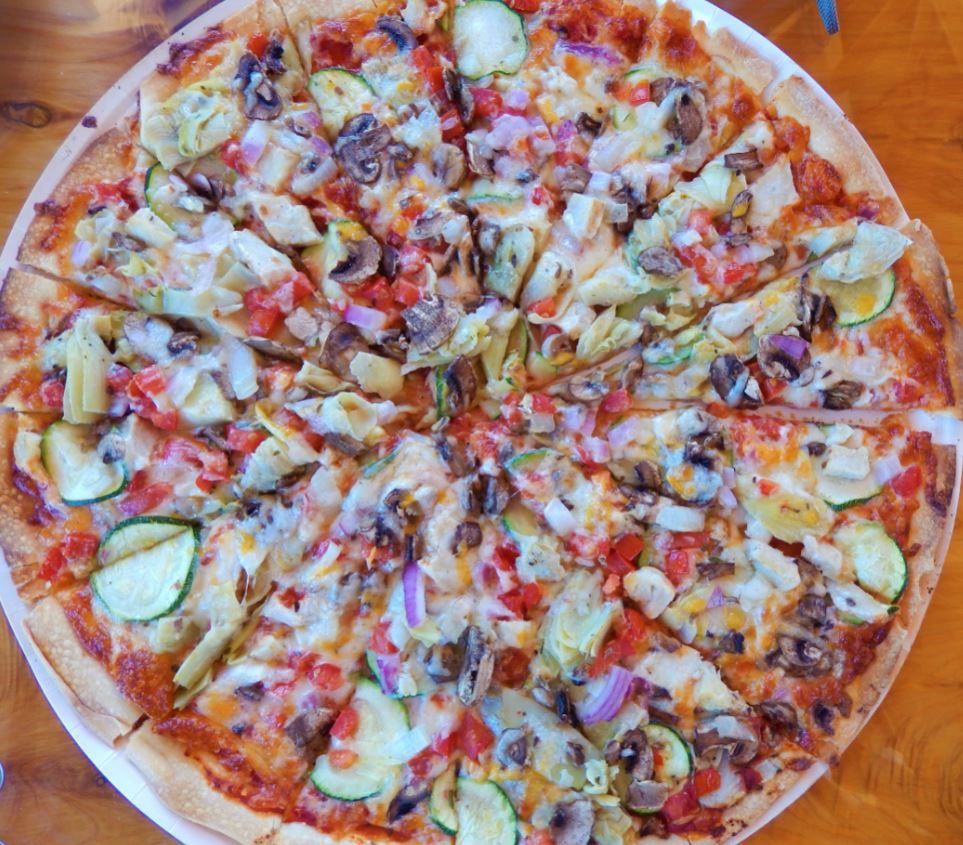 We got there just before noon, and while we waited for Kristin to return from her public tour (described a little more below, including a few items about the facility), John & I toured the visitor center’s displays. We have been there before, but we saw some different displays this trip. They have comfortable chairs around a table next to a book shelf with reference books on birds, flowers, wildlife, and details of the shrub-steppe environment surrounding us on Whiskey Dick Mountain. Behind the building is a stand of solar panels and all around are wind turbines whooshing in the breeze. 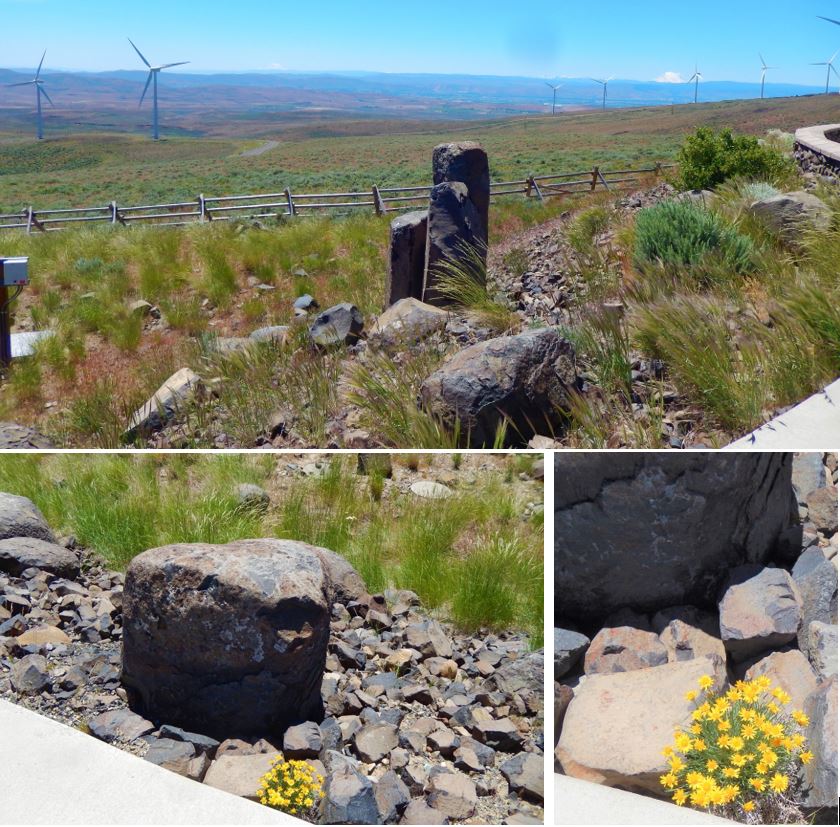 These I took adjacent to the walkway up from the parking lot to the visitor’s center.The Wild Horse Wind and Solar Facility and Renewable Energy Center is located 16 miles east of Ellensburg in central Washington.

Visitor center, old windmill, and turbine with a public tour (white hard hats) that lasts an hour, and visits the base of a tower.

Often they start with a walk by a large turbine blade to give an idea of the size. It was damaged in transit and was unable to be used on a turbine, so this is a fine educational display. 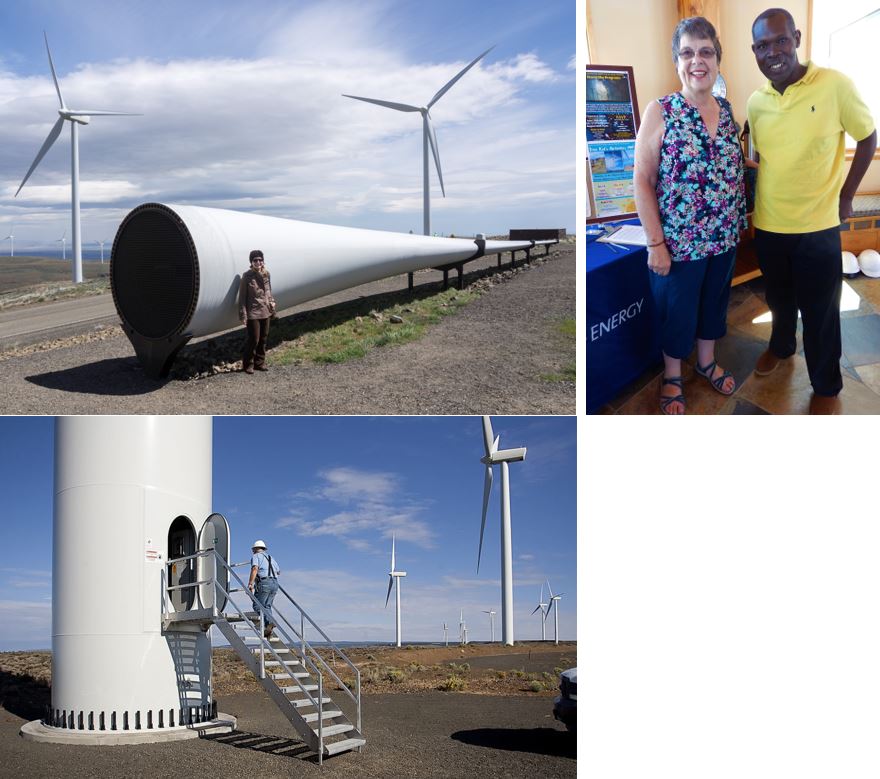 Two on the left are from the PSE website, with a woman standing next to the blade for scale; bottom is the entrance to the base of a turbine, which is part of the tour. Top right, I took of my friend Peggy Coble, with her friend Robert visiting from Kenya. They are both ministers (she in Thorp and he in Kenya, where he and his family run an orphanage). They were there the same day we were, and had been included on the tour Kristin was leading for a group of professionals in the industry, who had never visited a site such as this. They came over from the Seattle area.

At the end of the tour, they were brought back in to view the software displaying a map of all the towers at the facility with data about each tower (how much power it was producing, its maintenance schedule, and a number of working parameters that need watched and monitored). I could not get close enough to video her demonstration, but watched from behind the front row.

Pretty blue lupine and wind turbines at Wild Horse Wind Farm – that’s Mt. Rainier in the distance. These photos from the web.

The next video is especially exciting for me, because Andrea (Nesbitt) Crawford was my student long ago at CWU, and she began her career journey there as an intern (with me as her academic adviser).

Here is some more information and there is lots more on the Internet for PSE (Puget Sound Energy) and also on their Facebook site. Name to search for on Facebook is:
Wild Horse Renewable Energy Center.

Inside the Visitor’s Center: 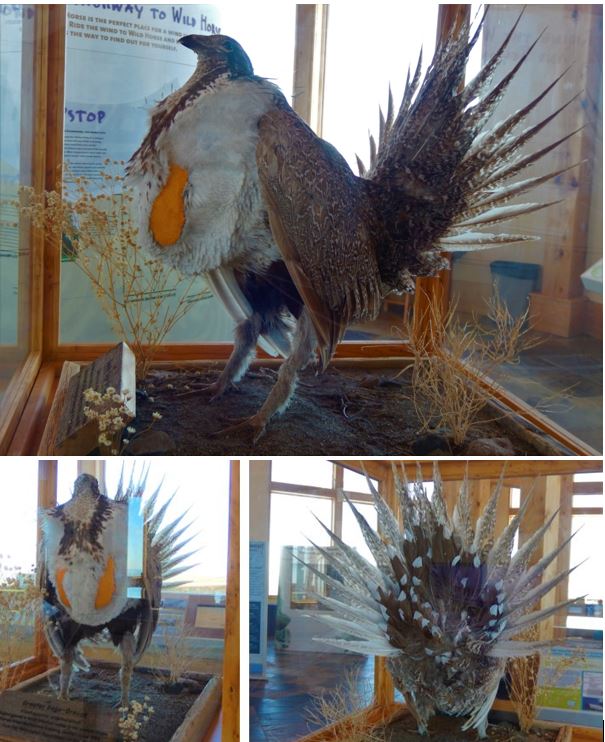 This is a Greater Sage-Grouse, housed in a glass box. This is the largest grouse in North America, and found only in the Western States. This was gathered on the Yakima Training Center lands in 1980 (just to our south), and is on loan from the WA Department of Fish & Wildlife. My photo (lower left) has a light blue exclamation point over it, which is a reflection from the glass of the opposite view window in the Visitor’s Center; the bottom two windows behind are facing west.
So the tour returned, took off their white hard hats, and toured the computer software and display of the wind farm. 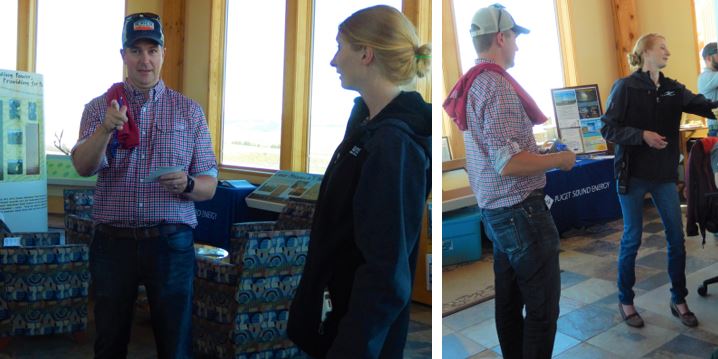 Kristin’s discussion with crew after tour and viewing the model & maps of the facility; previously they had all been gathered around the computer display shown on a small display screen behind the fellow.

When Kristin was finished with the tour group, she cooked the pizza, and brought plates, napkins, and utensils to our seats in the visitor’s center. Tiffany (the other guide on duty) joined us, for lunch and visit.

Then we went outside for pictures, having a lot of fun posing as wind turbines. 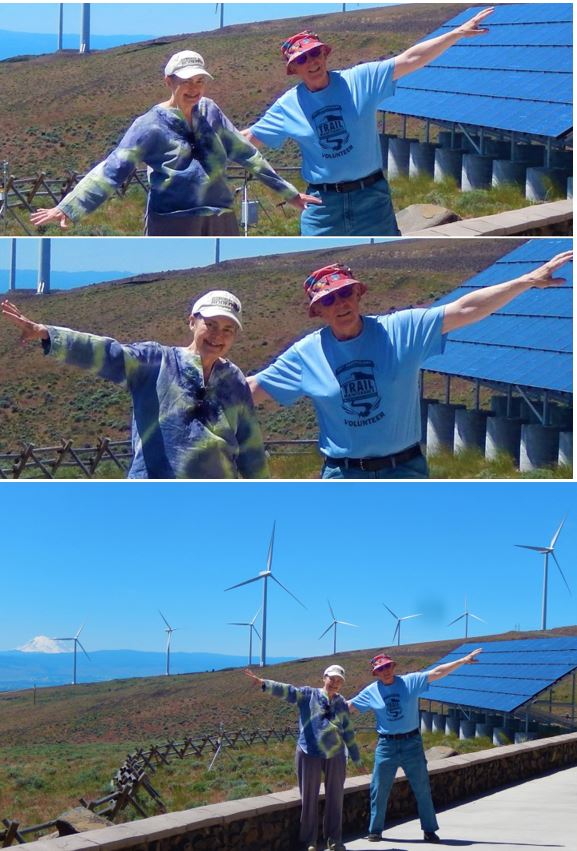 Top photo shows how the wind is blowing (look at my shirt) – and the solar panel array is behind John.
Next are fun photos of our tour guides –

Tiffany & Kristin – and then the two of them with John
John and I drove home. We were away for over 4 hours, but it was a great afternoon. Now I’m playing catch-up again (still).

I was expecting a call from UW medicine from Demetri, or someone, but nothing came through. Yesterday, while we were gone I received a call, but there was no message left, just the caller ID from UW. Over a week ago I had requested my PCP receive a copy of the Consultation report about my shoulder which was done March 11.

I went to the FISH Food Bank Lunch for music playing and got a little food today (tiny bit of spaghetti & meat; yogurt with fruit, and frosted brownie by Arlene) to accompany the salad I took. I was able to visit with Peggy Coble and Robert over lunch today, and we reminisced about their Wind Turbine tour yesterday.

I left there to pick up something for a newly befriended neighbor and then went by another friend’s house, after going for my INR blood draw. Once home, I received a call from the triage nurse with my INR results. They were good at 2.2 and I don’t have to return for a month.

I’m tired enough at 9:20 p.m. to go to bed now, and try catching up on my rest. I didn’t make it until later, but earlier than usual.

Met Kristina at our place to deliver air mattress and pad (I picked up yesterday for their Father’s Day camping trip, from a friend who works at the Senior Center). She previously had borrowed our ice chest.

I carried clothes for two people to Meadows to share after music.
We had 11 people involved: Sharon, Kevin, Evie, Gerald, Charlie, Nancy, Charlotte, Amy & Haley, Dean, Anne, Minerva, with Sandy in the audience helping them handle their music lyrics packets.
I picked up prescriptions at Super 1, Entresto for me and Tamsulosin for John. John’s was more expensive than mine, and mine is the most expensive I take ($40/mo).

Lots of wind today, but thankfully the temperatures were lower than yesterday. John worked outside some and I worked inside on many different projects.

Today is our day to go to Briarwood for music and early supper. John went along, stayed in the exercise room to read while we played music, and then joined us for food and conversation.

Our group had 9 players/singer there today: Manord, Evie, Gerald, Charlie, Nancy, Dean, Amy, Laura with her 2 little dogs, and Sandy. As usual, they put on a nice spread for us and the residents there. We even had two ladies (Margot & Jackie) dance to an instrumental we played, Peek A Boo Waltz. It was very neat to have them up front with us. The audience loved it.

Yesterday was Flag Day – so decorations are red/white/blue – but we did not know and our flag spent the day inside. 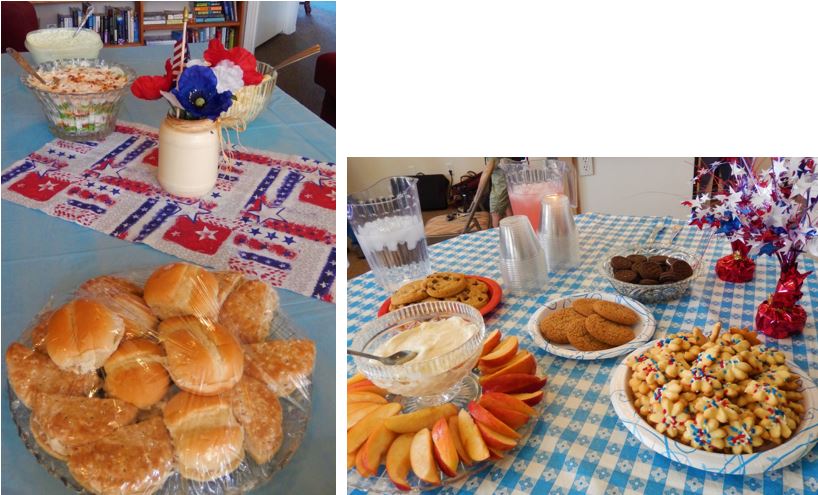 We had generously filled chicken salad sandwiches (by Lee) and two of her salads (Pistachio cream) and the best green pea salad I have ever had; not too many peas. A potato salad by Connie, and a fruit salad by another resident, not in photo. The right is the dessert table with Chocolate Chip cookies by Betty, Apples with a great cream cheese, marshmallow crème, powdered sugar dip by Lee, cute patriotic cookies by a resident, ginger cookies, and Oreos. Beverages were raspberry lemonade and water.

Afterwards, we went to get groceries; picking up some things at Fred Meyer (Bush Beans @ 99₵/large can and Super 1 (Fritos original, would have preferred scoops), & Safeway (two 50% off packages of ground beef (80% lean) with card savings and store coupons applied to both packages totaled $22.22 for 6.18 pounds. After the 50% off and some other deduction, they cost us $4.41 and $4.21 (total $8.62 or $1.39/lb.). Always, their pricing and paper receipts are the most complicated of any store. While there, I picked up my prescription for Atorvastatin for 90 days, ½ 80mg pill/day. There I use the Amazon Prime (Visa) card to purchase meds to get 2% off the cost (refunded by the credit card). It adds up and does not required insurance, (which has a higher copay). Their cost is even lower than the GoodRx price. I cannot explain it, but I will take advantage of the opportunity.

John had contemplated being on a WTA trip at Mt. Rainier, if they had it at a location he felt was worth the driving time. He decided he would not be interested in a 2.5-mile steep trail up and down over a ridge to Kautz Creek and 2.5 miles out at the end of the work.

Our alternative is to go to Swedbergs for lunch after 1 p.m. to see Ken’s son Donny from the Wash. D.C. area (actually VA) who is visiting. Cousins Julie, Jessie, and Robert will also be there. They served pulled pork & chicken by Rick, and potato salad (by Ken). We’re taking a chocolate pudding pie to go with an angel food cake Julie’s making, and Robert made brownies. 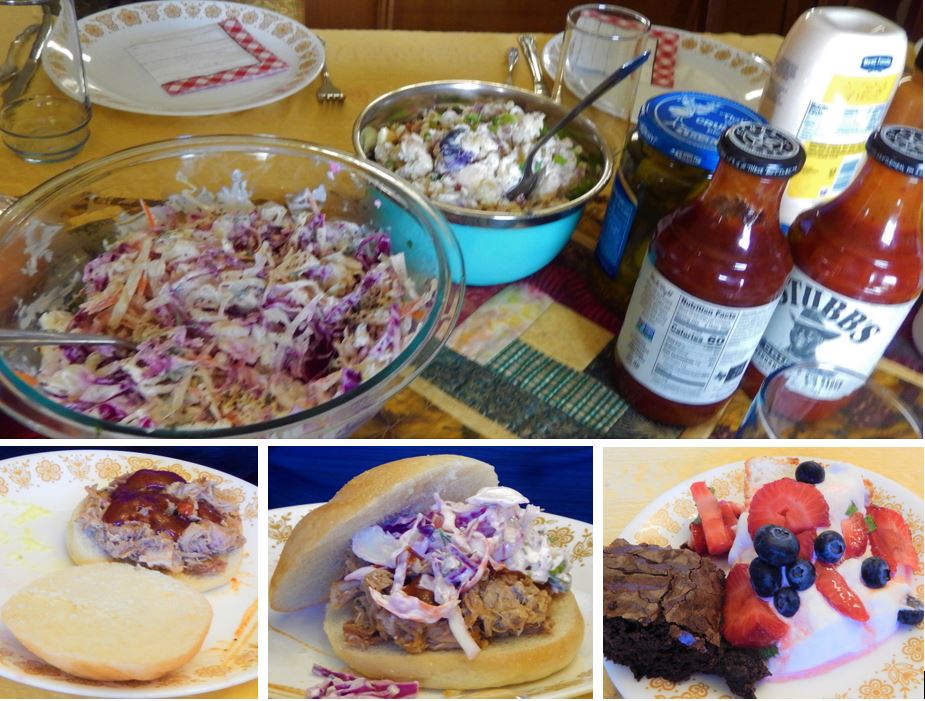 At 5:15 we got a call, expecting to be setting up a meeting for Monday evening with WTA Blue-Hat LeeAnne. CWU is hosting a 5-day training for Wilderness First Responders, where today she learned she would be dismissed early on Monday. She can go back across the mountains and sleep in her own bed – and not camp. So, we went in to EBRG for a visit and supper with her. A busy day.