We will start this week, with a photo depicting the end of a week of work by WTA folks. This was a “build a bridge” project. 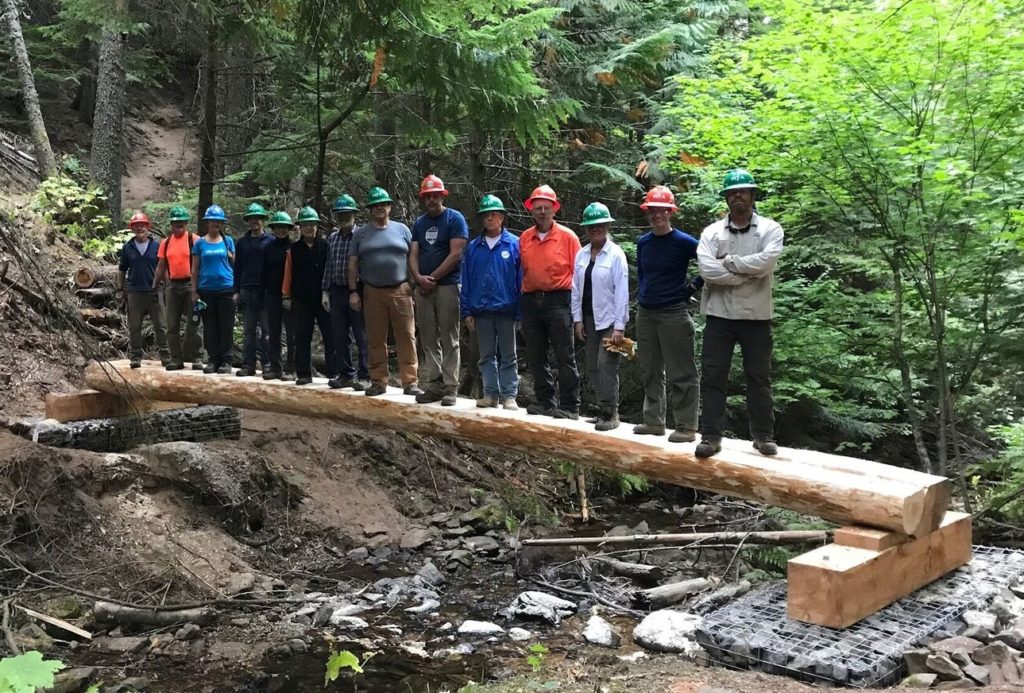 The “Day 6 Crew” on the new, but not completed bridge.
John has agreed to flesh out the project and post on this coming Wednesday. John was there on 4 of the 6 days.

Crazy day today for 3 hours when we both when to town for supplies (and to put gasoline in his car). We made two stops before he let me off for my exercise class, where I managed to find the gal with the birthday, last Friday, and gave her the belated card and gift.

After class we went to a few other places, first a carport to look at a box of slacks (size 14) that a woman had offered me. I was reticent taking more than two pair to try on, because I don’t even remember being in a size 14. Once I got home and tried a pair on, I was elated. They fit! Both were still brand-new with price tags attached. One is “plum” color and made by Alfred Dunner and the other is a light green, called Sage Heather, by Donnkenny. Tomorrow I shall return and get more of what I left behind today. For the next stop, we had a tough time finding the bus barn at the high school, but finally found it and left an insulated bag to gift to a woman who drives school bus there. She received it later, and wrote me a thank you note that it would work just fine.

On from there to the vet to pick up Annie’s meds left the last trip there a month ago, (they are no longer needed) and to drive from there on the Reecer Creek connection several miles to get a couple of long-sleeved gifted T-shirts from a former Free Box site member who gave me in June 2017 a bunch of weight-loss materials and cook books. I was able to thank her again and tell her I had passed them along to a friend on loan, and I was down 31# since she gave them to me. I was expecting only two shirts, and she gave John 4 (her father had died and no one in their house could wear them).

Came home to a bunch of other demands on my time that I still have not fulfilled.

Made the mistake of getting up with John at 6:30 and not going back to bed. He was off to near Roslyn, WA (30 miles) in the Teanaway Forest, riding with Bill Weir, for a WTA event.
One of WTA’s main supporters is Recreational Equipment, Inc. (REI), headquartered in Seattle. ( REI on Wikipedia )
The company’s annual leadership meeting was in Suncadia, a nearby resort and housing development. About 50 WTA crew leaders directed the work of nearly 300 VIPs of REI. This was the largest group of “volunteers” ever for WTA (with help from others, though). 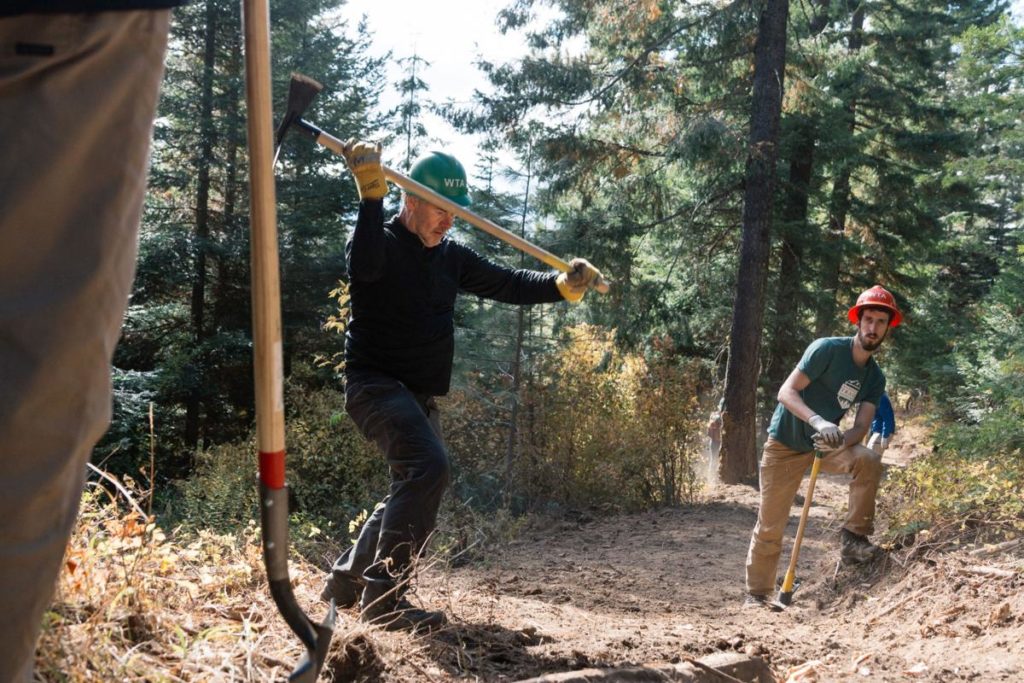 [Oops! WTA crews are not supposed to do full over-the-head swings of tools such as this one, a Pulaski. However, with knees bent he is not likely to destroy his shin, just the tool. ]

Below are links to newspaper articles in the Yakima Herald and Ellensburg’s Daily Record. The neat thing about this is the mention (and pictured in the Record) of Darcy Batura, who was my student, back in the day, at CWU, in the Cultural and Environmental Resource Management Graduate Program. It was a Masters of Science degree program with professors teaching the classes and monitoring thesis research from several departments on campus, including Anthropology, Geography, Biology, Political Science, and Economics.

John set his alarm for 5:30. WTA was starting work at a park SE of Seattle, on land once having underground coal mining. They worked on a trail that went by an air-vent shaft. 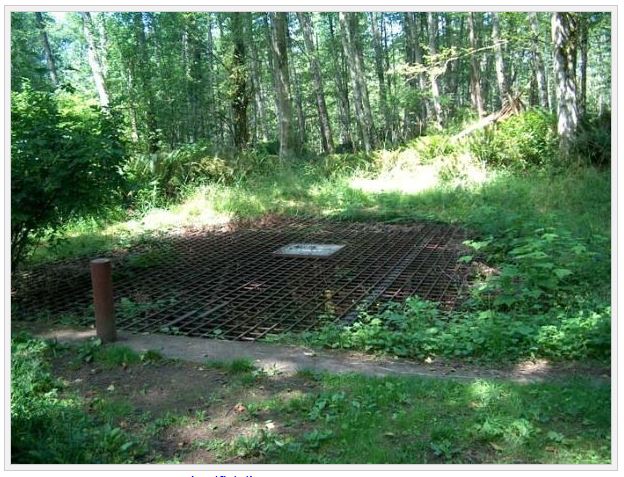 Photo from the web.

I went to the Soup Kitchen, SAIL, home to print for the guys and me for our music books for Oct/Nov and our practice session tonight at Evie’s in Kittitas, WA (10 miles from my house). We worked on the new music intros, tempo, checks for chords, and other glitches.
I ate some bran flakes with my banana to tide me over until I can get home from the session after dark, for dinner fixed by John.

John harvested all the butternut squash, while I went to play.

Earlier in the day, I was in new clothes that are smaller than any I have been wearing. The two photos below are of me in size 14 slacks and size M blouse. These (and more) were given to me by a woman on one of the three free Facebook sites in our town. The giver was given two boxes of clothes from the estate of a woman who probably could best be described as a “clotheshorse.”

Almost all of the slacks still had the original price tag attached. Or, I guess one could say she was a kleptomaniac. I don’t think that was the case, because she had notes attached with a hat pin and straight pins, with notes such as “needs shortened.” The blouses were clean but did not have attached price tags. Nothing looks worn. Material ranges from rayon to polyester and other stretchy materials. I haven’t even tried all the 14s on yet. I think I have 4-5 more (different colors) to try on. In the box were a number of size 12s and a couple of size 10, and one size 8. I have thus far given the 8 and 10s away, but have to work on giving the 12s. Prices on the slacks run as high as $40.00.

Here are two photos of me in the first two outfits I wore this week. One today and another Friday, both at the Senior Center (AAC). The one on the right I’m not wearing my usual smile, as John was taking the picture with my old camera that he doesn’t like to use. I didn’t know he was taking the picture yet, and the good one was out of battery. 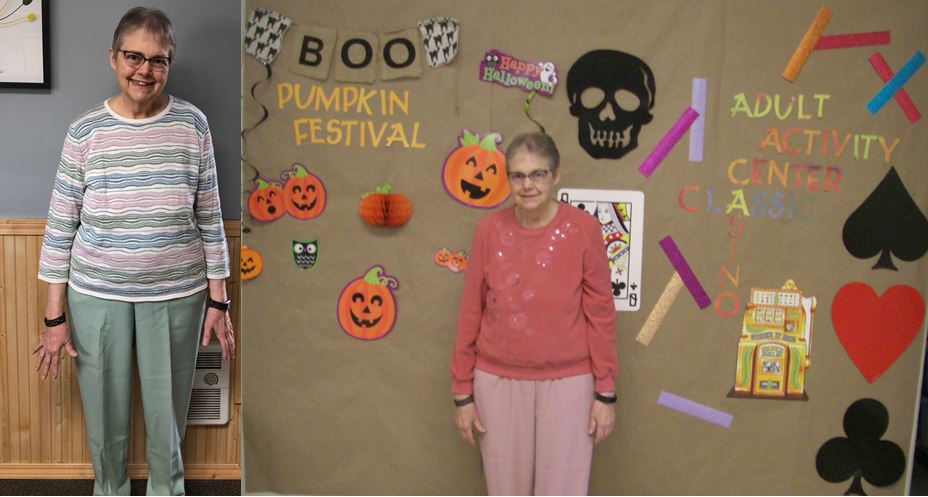 I spent the early morning worrying with last minute copying of music, still need to finish Laura’s, and marked the Intros in the books I control (for me and for Charlie & Gerald). I fixed my breakfast and took my huge dose of Amoxicillin an hour before my teeth cleaning. It is covered by my dental insurance, every 4 months, so that is nice. I got a fairly good report but need to concentrate more on my back upper teeth.

I called in 11 chairs for KV F&F today this week, for these folks who came to play: Laura, Minerva, Sharon, Nancy, Dean, Charlie, Gerald, Evie, Marilyn, Maury, and Manord. We had a good audience turnout with better than usual audience participation.

John drove me back to town to let me off to play music. Jessica’s tire pressure light was on, so he stopped at Les Schwab for free air. He got gasoline, bought 40 lbs. of sunflower seeds, and check out the beef sale at Super 1.

I need to take meds, fluoride my teeth and get to bed.

John and I took care of morning chores but I forgot one of mine that affected my ability to film and document the event at the AAC (our senior center). I left the charged battery at home.
They made bread sticks and had a special package of chips, called Nut-Thins, made with almonds & rice, mixed with cheddar cheese. These came with a mixed salad based on iceberg lettuce, which I can eat. Hot “homemade” vegetable soup was served last and was appreciated by all. Here is the package described above that everyone was given. The lunch and talk is free with a yearly membership. 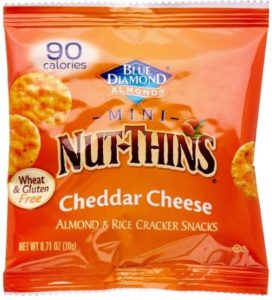 I took two cameras, to capture the crowd and to videotape the speaker, Brett Bleggi, on Winterizing your Gardens, but I failed in my intentions because I left my battery charging and it was not replaced in one camera, and I did not recharge my other camera enough to take a long video, so we had to just listen and enjoy the program without recording it, completely. I probably have 15 minutes of the presentation captured on video. I took some stills of the audience. I will send a report to members who have shared their email with me. The handouts discussed were from the Kittitas County Extension Office housed on 7th Ave in the old Armory building. Anyone can go by there and pick up helpful gardening literature. The ones he brought to our event included “8 Tips to Prepare Your Garden for Winter” and “20 Things to Include in your Vegetable Garden Journal.”

Our new AmeriCorps staff at AAC for the next 10½ months:
Deborah (Deb) Boudreau
Roxanne Laush
were busy serving us.

John loaded several Butternut squash (~30 lbs.) to take to the Kittitas Food Pantry. We also donated bags of dry beans. And we visited the clothing bank to thank Davelynne for the jeans again (with John present in his WTA logo shirt, for the donation to trail workers who show up with short pants and are not allowed to work in pool-side gear).

From there, we stopped by our neighbors’ house, south of us about 6 miles on Naneum Rd, to drop off a large pot of Hen & Chicks.

I then went to Maury’s house (28 miles) where a bunch had a music Jam for a couple of hours. Maury plays a dobro in our group. Got home after dark. A long day for me.

Chores for John were outside with yard projects such as moving squash from cart to covered pickup, gathering Carpathian walnuts (Black ones are mostly hanging in the trees), and other mundane tasks.

I mostly dealt with computer things and house cleaning and organization. Too much time spent fighting with the videos taken at the senior center getting them to You Tube. Also threw in follow-ups on music needs of the group who were at Maury’s Friday night.

I checked my car for previously printed Practice copies for Sharon and Kevin. Just one copy of Chinese Breakdown and Dill Pickle Rag, and 2 of the first one with the piano.
I just spent 20 mins. entering all my meds for the week, (except for starting on Wednesday), after picking up the Allopurinal at Costco, this coming Tuesday. Also have to pick up John’s Tamsulosin. He’s on a lot fewer and (by far) less expensive meds. He only takes 4. I quit counting mine.

John is out for chores at 47°F, and at 11:00 a.m. it is up to 50°. Allen is scheduled to come for his Butternut squash when it “warms up”. He usually comes in an open 4-wheeler, and showed up before Noon. He took a big one for the fun of it, and some smaller ones to use for the two of them. John explained how he cuts, fixes, and freezes for later use. Only a turkey roaster would be large enough to cook a half of one of the 17 pound ones.

The above photo was from yesterday when John was wiping off, drying and storing the squash in the covered pickup bed.

Allen lives a mile north and closer to the hills.

John and Allen were talking about all the cougar activity up north of his place, where they feasted on a herd of 300 deer a few years ago. The one that has been there this year seems to have moved SE and the folks down there were/are not thrilled. Allen saw a 3 or 4 pt. buck on his way down to our place this morning. His cousin Nick (a just south of us neighbor) has seen about 50 turkeys at one time.

John continued working outside until dark. He moved some tree-poles from down past the pasture and found the remains of one of the Merriam Turkeys which a coyote might have killed and taken away. Hope it wasn’t a cougar.