I do not yet have the Google Photos from the Aloha going away party for Jessi from the AAC (our senior center). I also have a few videos to share, but I’m not yet through processing them. They will have to be in next week’s blog, except for one that I’m the lead in our doing as what I will remember about Jessi forever.

Nothing got written down today until a day late. Hmmm, how’s my memory?

I spent a bunch of time finalizing music plans for two days this week. John watered plants and fed the horses. He’s doing a rescheduled WTA Tuesday, so had to get lunch and drinks ready. Squash need lots of water these hot sunny days. Plums are getting ripe.

I left for town for SAIL exercise class and to return the package of wrongly bought items from Amazon, at the USPS.

When I arrived home, John had done 4 more peaches, but we had a bunch on the bottom layer of the box, to complete. Didn’t finish those until late.

I started by getting up too early 5:00 a.m., feeding the cats hard food, and watching John get ready to leave before 6:00 a.m. for Surprise Lake, north off Hwy 2.
His one photo of the day is here:

Blueberries and John’s Orange Hard Hat
Last Friday a “group” cancelled after the crew cached tools over a mile up the trail. A late scheduling garnered a half-dozen folks to work Tuesday and then bring the tools out. A Thursday trip is at a different place.

He will be calling me from Leavenworth on his trip home, probably about 4:30 p.m. Then he is a little over an hour away from home there.

I intended to go back to sleep, after John left, after I fed the cats their canned food, but it did not work that way. I got on the computer and took care of some planned correspondence with others about several venues, and I didn’t stop.

John gave a rough approximation for the work crew’s far-point today on the trail as 2.6 miles. It is another 2 miles to the first alpine lake – he won’t ever see it. Day trips max-out at about 2 miles. WTA has other (overnight) trips to go deeper into the wilderness.

Called in John’s Levothyroxin refill request and I picked it up while in town today.

I printed copies of It is No Secret to sing as a tribute to Bill Bolman who was a volunteer at the food bank, and also a fan club member of our music group, at the food bank and at Briarwood, where he resided. This coming Saturday is our scheduled visit there (3rd week of the month), and we will sing and play there as well. That actually turned into a much more of a tribute memorial, which you will experience if you look at Saturday’s post.

Right before my leaving, we contacted by phone, Consolidated Communication to report our problems with losing our DSL (sometimes three times a day). The tech support (in Tennessee) listened and decided to call for a technician to come to our house. We gave him the phone number, and expected the tech to call before showing up. He did not call, but John was here, and the technician supposedly fixed it. I came home while he was still here, but leaving. John told him if he had come tomorrow, neither one of us would have been here. Our land line was clearly on the work order and we were told he would call first. It’s nice to have it back working again, and I hope it continues. (It did not, so I guess something else is wrong.)
I worked on several projects before leaving at 10:55.

One thing I did this morning was to change from wearing my FitBit to a watch to wear in the shower, because the FitBit is only supposed to be splashed, not to experience running water. I was rushing to leave, and neglected to change back to my FitBit, so the specifics of my exercising today, steps, aerobic time, were not recorded.

After music at the food bank, I went by the hospital for my monthly required INR & potassium blood draw. I called ahead to the AAC to let them know I was coming but would be late, and why. Turns out I wasn’t that late arriving. When I was called with my test results (INR 2.1 and K 4.5), I asked about when John’s test was scheduled in Sept after 2 months of increasing the dosage to 88mcg. Cody looked it up for me and I put it on the planning calendar in the kitchen.

John left at 5:40 a.m. to stop off in Ellensburg for gasoline on his way to the Pacific Crest Trail (PCT) at Stevens Pass. Starting elevation is 4,085 feet.

I slept in, needing the rest very much.

Today is my day to play music at Pacifica Senior Living.

Call from Deschelle at Yakima Heart Center about setting up an appointment with my cardiologist for a 6-month checkup. No blood draws are requested, but they haven’t received my INR / Potassium draws since April. So, I have to arrange for that to be sent down.

Here is a neat video of our musical string band group playing a gospel song, before our regular Aug/Sept program of 22 songs:

I came home from playing music at Pacifica, and John called from the Lauderdale junction. Big surprise because I thought he would be very late and we would be late arriving at the Audubon summer picnic, but in fact, we got there ahead of many people.
I had packed our utensils, places, cups, napkins and forks to take along with our 3 bottles of White Heron wine as our “food offering. They always have too much food. John picked them out last night and they were refrigerated then: Roussanne, Malbec, and Rose’ of Syrah. We brought home a smidgeon of the Roussanne, a little of the Rose’, and more of the Malbec. A lot of folks drank beer.

We filled our tummies with grilled hamburgers and all the fixings, several salads, and great desserts. 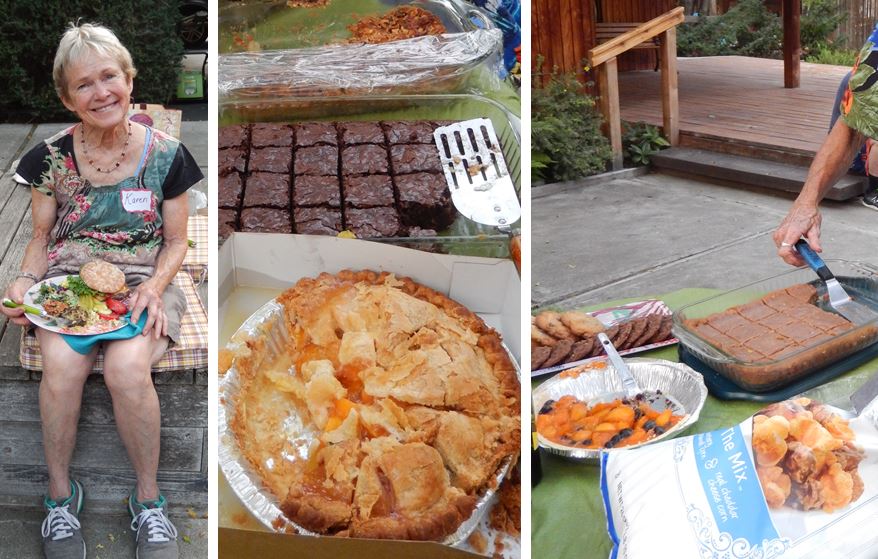 Karen Johnson with her meal, and my favorite, the dessert table

John filling a plate and the wine. 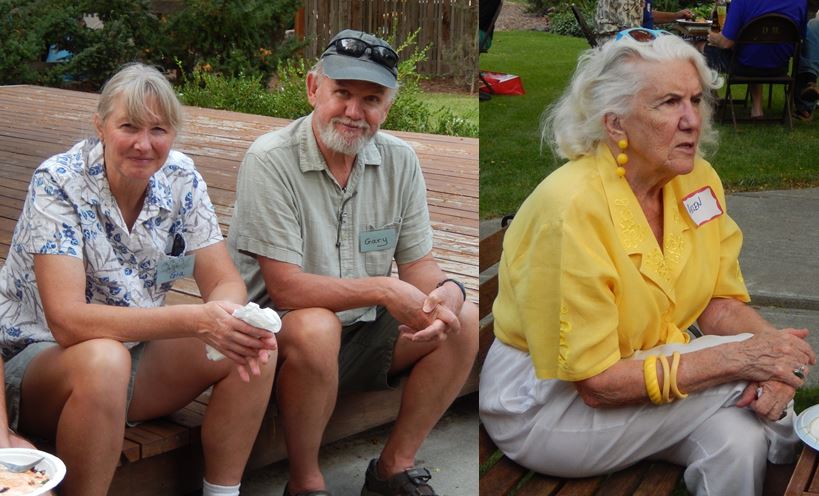 Gia, Gary, and his mom, Helen Cummisk, my AAC friend

Our hostess, Gloria and others
We enjoyed our evening having good conversations with many people.

John left early for his WTA work trip on trail at the PCT near Stevens Pass. He did not want to do 2 days in a row but he is trying to get a few extra in this month.

Contacted AAA for my annual payment that bounced. It was likely on the scammed card, VISA (Costco) in my name.

Today I was really swamped. Gone today at Senior Center volunteering time as photographer for going away party for AmeriCorps gal (local with horses); home to more demands on my time getting organized for us to go play music at the Kick-off Rodeo Breakfast (Pearl St. across from the Rotary Pavilion we’re on the stage at 8:00 a.m.).

After the end of passing around the mic to people to share their memories, I took the mic and described my memories of a song (“I Feel Good”) she used to show us her technique of Good Punches to the music. We decided that a number of people from our SAIL class were there and we would demo to the group. Here are the results. I handed my camera to Katrina to take a video.

I was awake first and flipped the alarm off set for 6:00 a.m. I got stuff ready to leave for town to play music at the kickoff Rodeo breakfast. John went with me to help carry things and also took his camera..

We had the stage crowded with all who would fit (we were likely over fire code for exiting). We did not have room for all our group. Thirteen included today were (left to right, Manord, Marilyn, Maury, Kevin, Gerald, Dean, Evie, Charlie, Nancy, Joanie, Rita, Sharon, Amy) in the photo below. 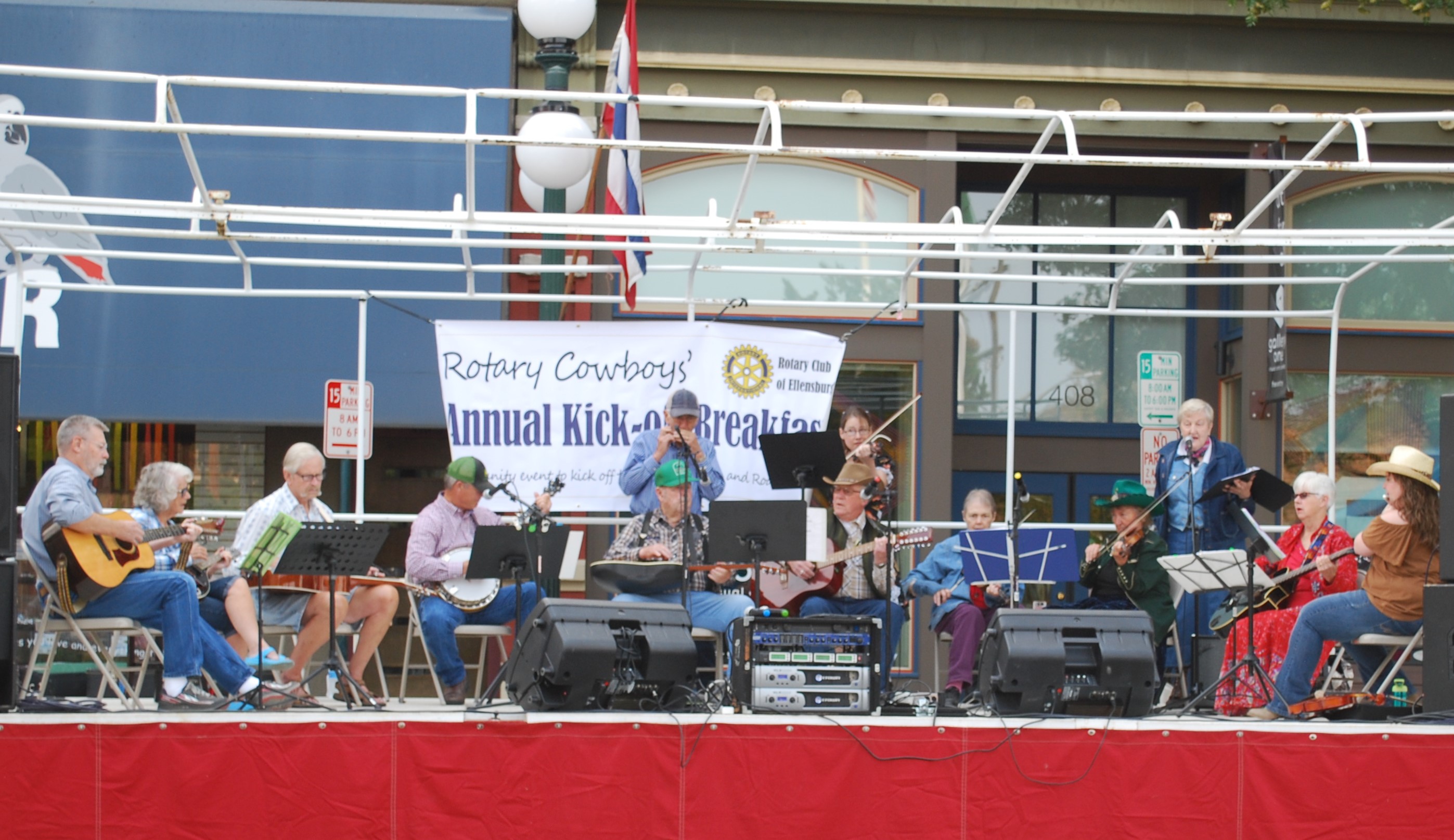 Only photo John took where all baker’s dozen of us are showing.

Evie (the standing violinist in the middle) brought her friend Gene who sat out in the street, at a table (very noisy, with Evie’s camera on a tripod, and took video of our playing). She then edited out all the interruptions and created 38 minutes of our songs.

Here is that creation, which has a lot of competition for our sound to the audience eating pancakes and sausage and visiting. The cooks used small chocolate chips instead of blueberries on the pancakes. The cost was $5 for $1.25 meal. It was a fundraiser, but we skipped it and went home. Musicians could eat free.
Note, you’ll have to pull the viewer back to the start to view from the beginning. The video comes up at 24 minutes into the music.

I will create a link to all the photos John took.
(it will have to wait till next week’s blog) — LINK to John’s photos at 2018 Kick-off Rodeo Breakfast

In the afternoon, we went to Briarwood. We had the most players we have ever had today – 13 of us, plus Haley, who dances and yodels with us.

I have decided to put this video in about the way we started our time at Briarwood.

Good thing I stayed up tonight. At 32 minutes to go, the DSL shut down. I restarted the router, and it picked back up when the DSL returned. Phew. Now with 28 minutes left, I can click done and go to bed and not worry that I lost several hours of upload.

I needed to work some more on the blog anyhow. I made through until after midnight, so I did not have to let my laptop run on its own. Once I restarted the router, thank goodness it returned to sending to YouTube and I didn’t lose the 2.5-hour upload. (It was on my higher resolution camera (Nikon), and only was for 10.26 minutes of video, because I do not have the ability to have the software to change the upload time to be more efficient.) The time is significantly lower on my very old Exilim camera to transfer files. The “Just a Little Talk with Jesus” on Thursday, was on that old camera. I need to send that to people who were there at Pacifica.

We have peaches to finish; we never did.

Plums to pick and distribute. John picked a bunch probably close to 25 pounds this afternoon. I contacted two neighbors and packed up some for each, and one carried the share to the other, to save me the trip. Tomorrow, I’m taking a bunch to Briarwood, and to the Senior Center.

John plans to move hay from the pole barn to the horse trailer down in the middle of the pasture. Yesterday he moved a few bales to the roofed place next to the corral nearer the house. Temp on front porch at 11:00 is 72. Airport is 70, visibility 3 miles, and no wind.

John came in and fixed a nice brunch. I continued working on projects that were created by my activities the end of this week.

For some unknown reason, my computer stopped with a black screen, and it was still plugged in, so I know not the reason. I turned it back on, and it came up without anything saved. I wish I knew what caused that.

Also this afternoon our DSL has been off and on several times, but it was on when this stoppage occurred. I have no clue. I do know I must finish this blog and process other data waiting for my attention, before tomorrow morning.