I’m starting with things left out of last week’s blog: our trip to Moses Lake (Wed), John’s trip home with the wildfire blocking west and eastbound I-90 from Vantage to Kittitas (Thurs).

We went over Wednesday, July 18 to Moses Lake to visit with my violin teacher, Roberta (Bobbie) Pearce, from Nampa, ID, who taught the class I was in, in Kittitas, for 22 years, and then I took another year at the WOTFA Summer Workshop, when it was moved to Moses Lake. I only did it that one year, because the weather all week was way too hot for me. Her daughter, Katrina, came too, as she is teaching the Hot Shots class (Advanced young fiddlers), at the workshop. We also had a gift (along with dinner), that I got from an Ellensburg resident, and gave to Bobbie for her collection of porcelain dolls. This one was newer, from the 1990s, but she is a pretty little thing. She sat on the side of our table and watched us eat. We also got to enjoy the sunset over the lake. 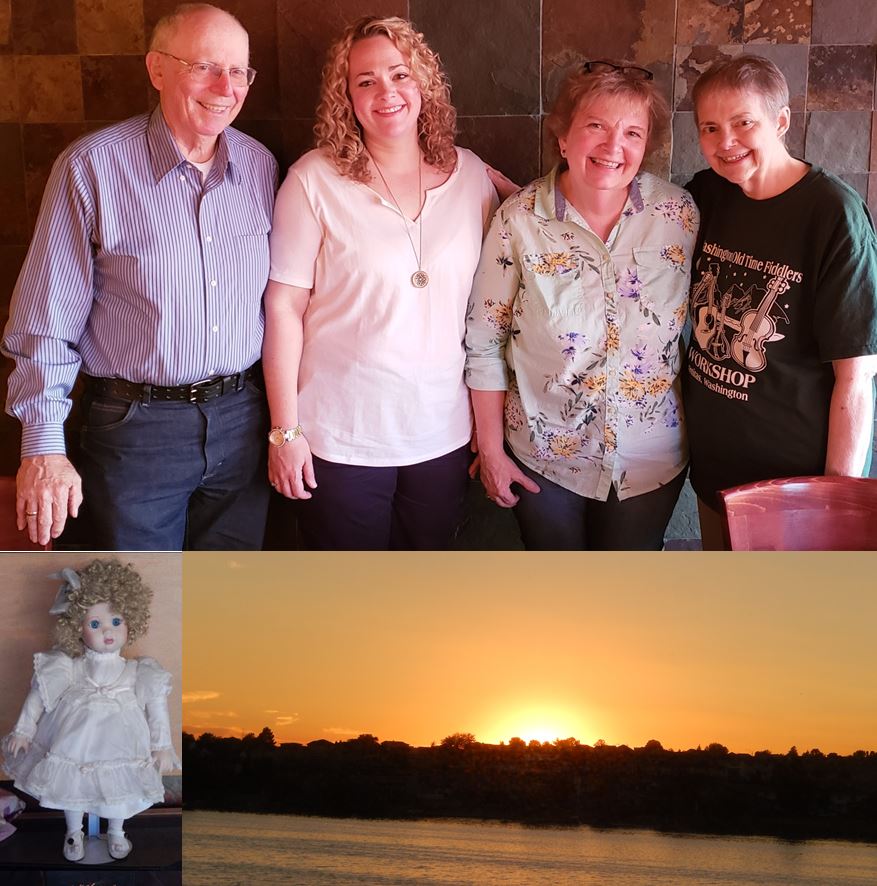 On John’s way east early in the morning following our dinner at Michael’s on the Lake, he drove again by the town on his way past Spokane to Mika Peak for a Work Party, carrying his new Stihl brusher in the back of his canopied truck. His trip home was another delay of over an hour, by the closure of I-90 in both directions because of a grass/brush fire started near the highway.

I mentioned that in last week’s blog, but didn’t included any of the pictures I had found or that John took on the last long leg of his trip.
First, a map of the 3 fires in our area, influencing John’s trip home. Boylston was the one I saw the smoke plumes from, on my way home about 3:30 p.m. from Ellensburg. 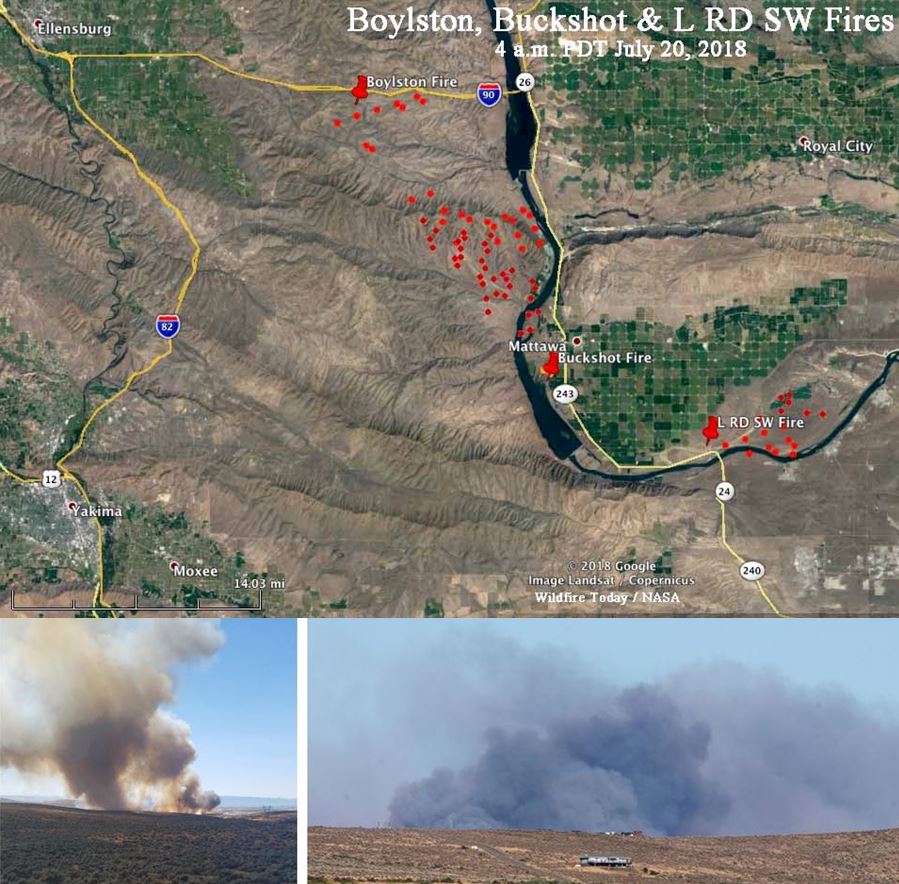 I’ve combined 4 of the images John got on his camera from the east side of the Vantage Bridge on I-90. 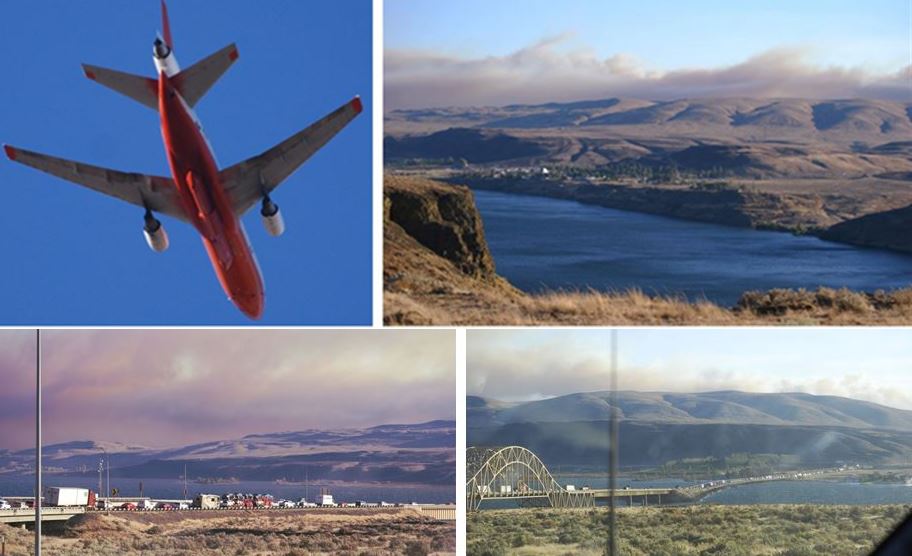 Top row: Plane heading back for a refill of retardant at an airport in Moses Lake, from rest area looking toward Vantage and smoke from the fires on Yakima Training Center lands.
Bottom row: Line of traffic westbound waiting for 50 cars coming in from the old Vantage Hwy bypass I-90 to get onto the entrance going east. Then 50 cars were let through the west exit of the bridge at Vantage onto the old Vantage highway.

I sent this to all the AAC folks: Links to both photos & Videos:

Link to 5 Videos, 7/13/18 AAC for Nicole Jones Going Away Party
Click on each video to start and view; they will repeat so click on it to stop it and go to the next video (to the right is a forward arrow) to click on.

I worked on various projects this morning, and I made it to my SAIL class by 1:20 p.m. I carried in a vase of Yellow Star and Tahitian Sunrise dahlias that John raised and picked. Everyone loved them. You saw them still growing in photos in last week’s blog.

Afterwards, I made it for my INR blood draw check, and got the results when home, of 2.7 (good) so don’t have to check again until a month. Potassium was 4.5, also fine.

John did a lot of watering today, and also came in to fix a casserole for supper. He had cooked rice in the outside garage in a steamer earlier in the day, and cut up ham, onions, mushrooms, and put in the rice and mushroom soup. Picked some of our yellow summer squash, and fried it for supper. Then he fixed a piece of his lemon/blueberry cake with strawberries and ice cream for dessert.

We are setting up a regular service of inspections, oil change & lube for Monday a.m. next week, for John’s Crosstrek.

Today, I went first to town to drop off at Airport Storage a bunch of Wall St. Journals and magazines for a business student. Then by the Food Bank bread room for bread for a seeing-impaired gal and her child who need bread and she cannot drive. Also got a roasted garlic bread loaf for a neighbor. From there to the Family Eye Clinic to discuss my non-darkening progressive darkening glasses. Today, about 1:05, I reached the optometrist for checking eyeglasses for sunshine. It turns out they lighten up when one is inside the car driving.

Yet, I found this on line: As light conditions change, the lenses adjust quickly to provide the appropriate level of tint. They block 100% of UVA and UVB rays, providing convenient protection from UV radiation. However, Transitions® XTRActive® lenses react to visible light so they do moderately darken behind the windshield.

Came home after, and washed dishes plus did a lot of emailing for various projects.

Food bank soup kitchen music, but did not go to SAIL today, because of going by the optometrist about my new glasses… and the need to come back to town tonight early for Nick Zentner’s geology presentation at the Library.
John fixed some of his Ailsa Craig onions (named after an island in the Firth of Clyde west of Scotland), for dinner and hushpuppies tonight. They are a mild onion, big & white.

I showed one photo of our garden’s Ailsa Craig last blog, but here are some close-ups from the web. One very large one – we have never had one larger than a softball, but we have had a 2 pound onion. 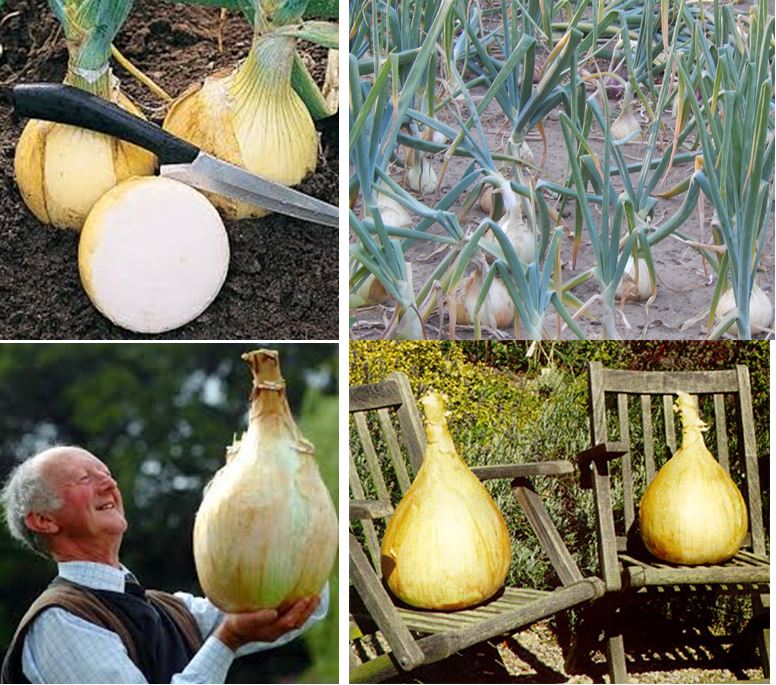 The top right is our onion patch, in our old garden, and the other 3 are from the web.

I helped John load empty wine boxes into his car to take over tomorrow for the bottling. Cameron was in need of boxes to store his wine. These are mostly white boxes, John emptied from our White Heron ones or we got from Grocery Outlet. Last week, I went in once and brought home three.

We went tonight to Nick Zentner’s talk at Hal Holmes (the auditorium adjacent to the Ellensburg Library. Below is my video, with the link to it, but it was not completed until Thursday midday.

Over 50 species are found petrified at the site, including sweetgum, redwood, Douglas fir, walnut, spruce, elm, maple, horse chestnut, cottonwood, magnolia, madrone, sassafras, yew, witch hazel, – – and ginkgo.
Nick reports that, despite the name, most of trees are not Ginkgos, no one is sure where they came from, or how they got there. There seems to be a large mysterious lake involved. It will be a neat story if it ever gets figured out.

John left at 7:40 a.m. to be at White Heron by 9:00 a.m. this morning for bottling Late Harvest Roussanne. He brought home 3 bottles (in tall skinny bottles), which hold ½ of a regular bottle of wine. Regular bottles of wine are 750 milliliters.
[A fifth of booze, or wine, was equal to one-fifth of a gallon. Even though people colloquially refer to liquor bottles as “fifths,” since 1980, they have actually been 750 milliliters or 25.36 ounces, which is slightly less than exactly one-fifth of a gallon.]
John brought home 3 of those also, 1 white and 2 reds.

I worked on Nick’s new upload, to redo completely what I tried to upload last night (and through the night), which failed. I did not complete sending it to YouTube until 11:50 a.m., and I had to leave soon after that for afternoon music. It was a crazy day.

After playing at Hearthstone (where we had a fun and interesting time), I went by my optometrist to ask a question. It was a successful visit. He is going to send a request in to change my glasses (no additional cost), and trying for a darker color.

We got the new music into packets and stapled.

I talked to Jim (optometrist) this morning, after visiting with him yesterday afternoon. I asked him if he could raise the gradient region so I don’t have to tilt my neck so much to get the effect. This was already in his thoughts, and the order goes out this morning to produce new glasses with the new Amber color. I tried hard to use the first attempt with my music, but could not get happy with them.. I’m sure this adjustment will help me. 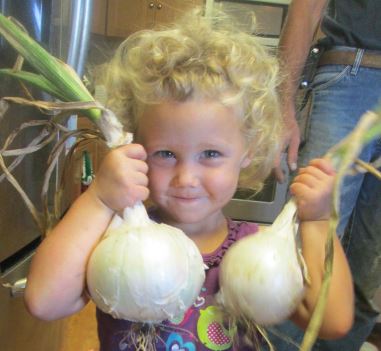 John harvested Ailsa Craig and Redwing onions. The Redwings are smaller and more pungent, but have the storage potential of 8 to 10 months. A few are shown to the upper left of the Craigs, that may only last a month or two in storage.
There are 3 more types to harvest: Copra (white-long keepers), Ringmaster (sweet, mild, 4 months), and Sterling** (mildly pungent, 6 months).
**For Sterling they use a cute kid in the picture.

Now we are getting ready to dress and leave for a 70th birthday party, near the Teanaway River 20 miles west of us. Sharon (her birthday bash) plays the bass guitar with our group. She and husband, Jack have a place suitable for horses on this side of the Cascades, but usually reside on the wet side – going back and forth at least once a week. We planned to eat at 4:30, with our group playing at 5:30, but it didn’t happen that way. We played first at five and went for an hour, not eating until the end.

John drove separately because he has to leave the house tomorrow morning at 4:30 a.m., for Mt. Rainier WTA work time and needs to get ready to go. He left the party before we played and went to EBRG for gasoline.

I had my camera along, but didn’t give it to anyone in the audience. Tonight, I received 5 photos of our group, Kittitas Valley Fiddlers & Friends, from the wife of a member of our group, Julie Gibb. Hubby Kevin is our banjo player, in the photo below, sitting behind me in a blue shirt. I have on a straw hat. The birthday girl is Sharon Jenson, to my left in the white blouse, playing a bass guitar. 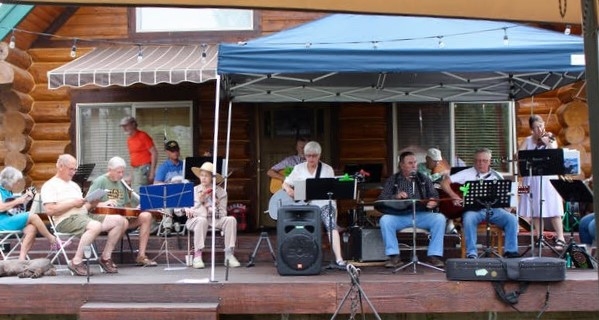 The photos of other musical groups below were taken by our flute, fiddler, washboard, penny whistle player, along with her daughter Haley, who is our mascot and yodeled the last song with us. 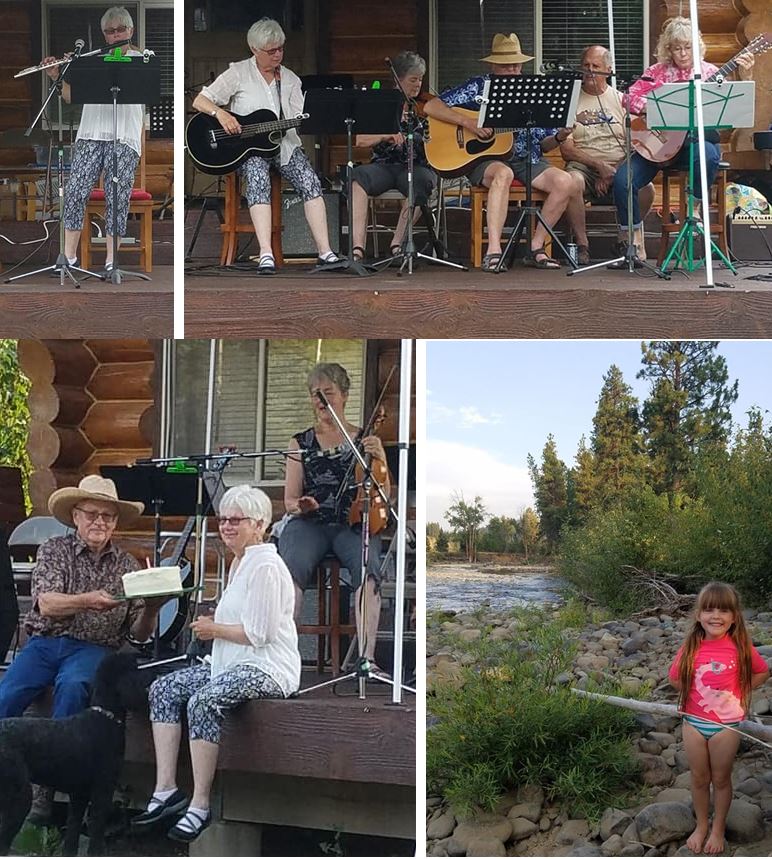 Top: Sharon’s solo with flute, Sharon with another group
Bottom: Hubby Jack presents Sharon a BD cake to make one wish with Barb looking on, and Haley stands at the Teanaway River which flows by their property. Haley (5 yrs old) enjoyed swimming there and finding caddisflies. She loves insects.

John left very early (4:20 a.m.) for the South Puyallup River Trail on the southwest side of Mt. Rainier. Several years ago a major rainfall trashed a section of this short trail. WTA volunteers will spend (Fri, Sat & Sun) until October doing a reroute of the damaged sections. They worked in shade at 4,000 feet, so the hot weather was not a big issue. He got back at 7 PM.

Today is Arlane Nesmith’s birthday, and I just called her, sang Happy Birthday, and wished her well.
Worked on the blog and a bunch of chores all day.