Over the past 2 & ½ years I have often posted photos and comments on the remodeling of the property. The house was not of high quality when built and 35 years of wind and snow had taken a toll. I inquired at the County about the need of a permit and got an unexpected result. A Federal map classified the location as being in a flood plain, thereby limiting what I could do. The map is wrong but bureaucrats follow rules, not facts. I wrote a letter saying that if certain things weren’t soon fixed the structure would deteriorate beyond repair and we would have to move. I was offered an option of paying a $500 indulgence for an official okay to fix things.

The first photo shows the look of the place at 39 years old.

A wood deck (A) has rotted and become dangerous. Also, it was built to match the concrete behind pallet (B). There is a 5” step up behind where the two pallets meet. Water draining from the roof splashes on to the area at the front door.
‘C’ is an area once covered in black plastic. The plastic goes under the deck. What was the water supposed to do? At ‘C’ and extending 20′ out, the area widens, is covered by red cinders, and has a 15′ high Mountain Ash Tree; pretty, but messy.
‘D’ is a concrete area that extends to the right in front of a 2-car garage. Note the step; that’s two to get to the front door. The concrete was poured at the level of the garage floor and not sloped out. Rain and snowmelt coming off the roof splashed back against the house and could run under the garage doors. ‘E’ shows how high the water splashed onto the house. The siding is porous wood sheeting, and absorbent.
Next: getting started. 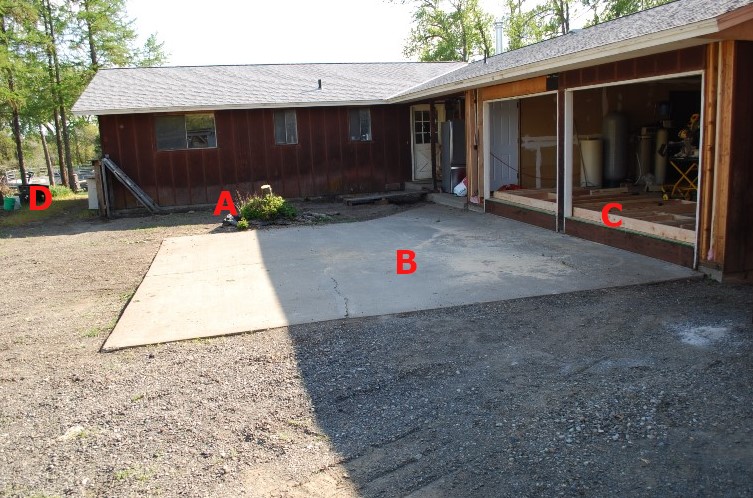 ‘D’ is where a shed-roof car-park will be.
‘A’ shows the stump of the tree and the old wood deck gone, except of a temporary ramp. Note the refrigerator this side of the door. ‘B’ is the concrete approach to the garage. Multiple cracks and slight dipping on the right were issues. ‘C’ shows a new floor being constructed inside, on top of the old concrete. The total height, when finished, will be slightly over a foot with fiberglass insulation under a stone floor.
Concrete ‘B’ soon was gone, as was the stump near ‘A’. Next photo.

The inside and outside framing of the new room is in progress. There are two windows. Behind ‘w1’ the space is clear, while at ‘w2’ there is framing for a walk-in pantry that will be accessible from the kitchen. To the right of ‘P’ there is one of several stakes – markers for holes to support posts. Also, to the right of the worker there is a Big Brown Shed (BBS). It is 6 feet from the side of the house, has a metal roof, and dumps water and snow against the (garage) side.

Next is a November 2022 view, that is, now. The BBS now has a long (39 ft.) roof line sloping away from the house. The house siding (A) is false sandstone with cement/fiber above – both chosen for the fire-resistant property.
There is a matching wall in front of the passage between the shed and the house. A similar wall is in front of the front door, to the left of the covered ramp. The concrete ramp goes to the height of the house door – no steps, where before there were two. On both sides of the ramp, river washed stone covers the area. There is a hidden “dry well” with a ton of rock in front of the window – left of A – and extending 15 feet in the direction of the camera.
On the left is a blue metal sloping roof (C)– car park area. Compare with ‘D’ in a previous view. 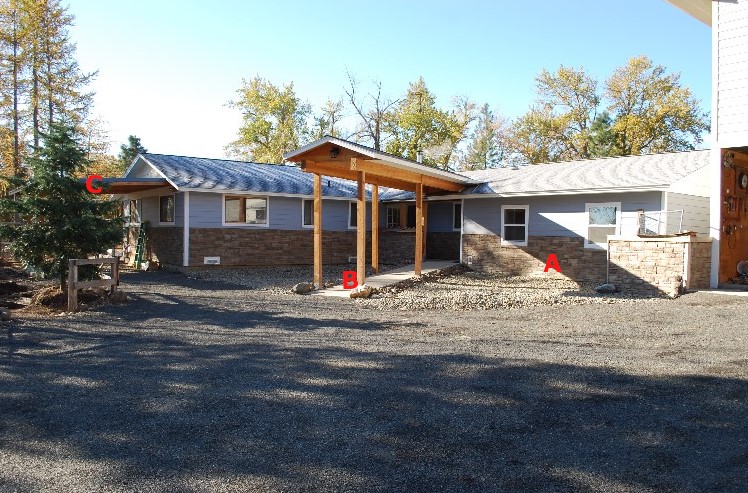 Next, inside the new room.

Most of the room has Hickory paneling, with Knotty Pine trim. The very right edge is the corner of the walk-in pantry. The room’s ceiling was meant to be the violet color the Vanguard Group uses as a logo.

The contractor, Walter, and I visited the paint department of our favorite supplier, looked at samples, and chose one. The store’s lighting must have given a false view – we ended up with a conversation starter. Even though 2022 has been a bad year for stocks and bonds, the money for this remodel has come from the markets, or more accurately from the cushion they provided. Cash-out of other investments were mostly the source of the $$. 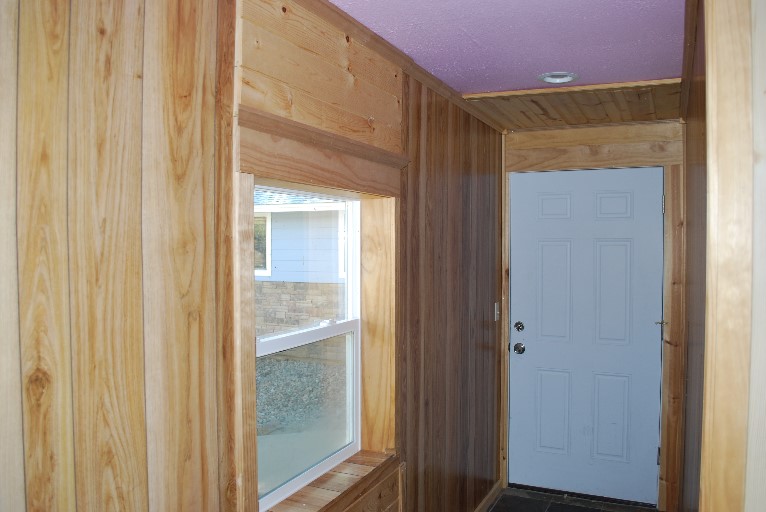 The inside of the pantry has ends with panels and sides that are a simple beige paint. Refrigerator, now inside again, is hidden behind the inset.

The paneling is printed with drawings such as seen on the left insert. Recall, this was part of the garage and had two steps down from the laundry off the kitchen. There is a double-hung (swinging) knotty pine door from the pantry into the new living space – part computer room.
Before going outside, here is a shot of the failing ceiling in the garage, and a second one of the front door. These are just 2 of the many problems the house had. The door still needs to be replaced. 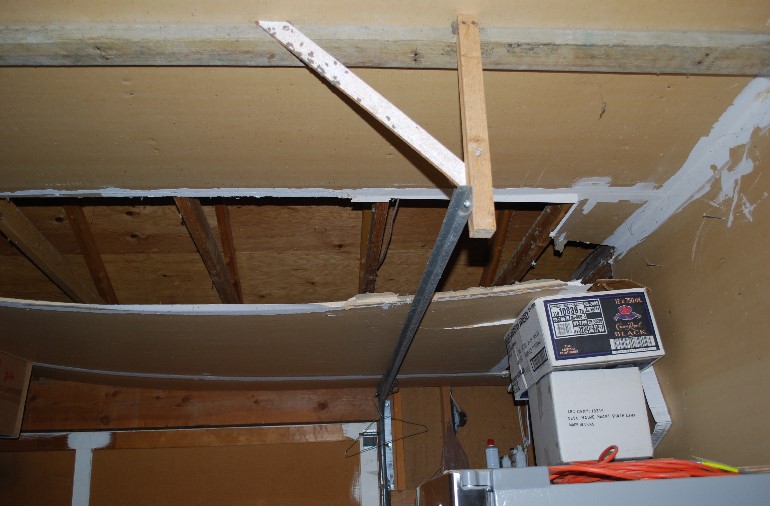 The ceiling was attached with small nails usually used to hold cedar shakes on a roof. They should have used screws. I put one of these sheets back up years ago. The railing for the door stopped the fall. All of this was fixed and properly secured with screws and taped before getting the lovely purple paint.

Next shows the front door. It should have been replaced years ago. Note the crack below the latch. (Sorry, this one is a bit unfocused.) Over the years our Brittanys seriously scratched the door. We didn’t want to replace it until the dogs were gone. Now that I have no dogs, the price of the door I want doubled in the past 12 months. So, I wait.

There was a concrete slab (12 x 12) on the back side. We covered it and much more (air handler) with a matching roof and post the same as the covered ramp. Note the near right side with the high small windows. There were 3 large windows here. The room inside heated up because of sunlight.

The new roof of the big shed appears (upper left) behind & above the patio covering. Below: The BBS looked like this. The red line shows where I expected the new roof line to be. 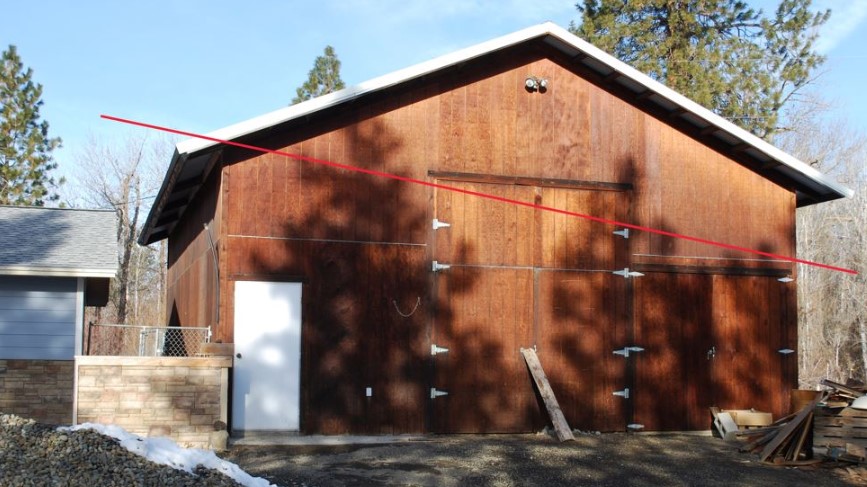 While not finished, below is what it is today. Note the overhang – top left. 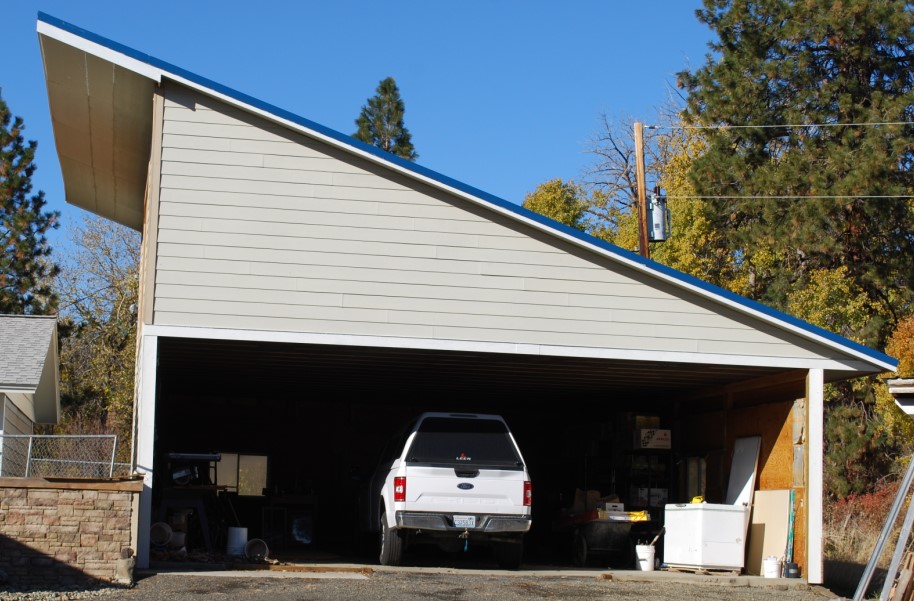 On the south side of the house, we added a slightly raised deck, covered. Windows and double doors, and an animal door, were added. The room through the new doors was built with no ceiling lights, and only one small window that could open. The west wall had about 60 sq. ft. of glass, facing the sun. Three photos prior, you can see those were taken out and replaced with thin windows high under the soffit. Two of the big windows were used on the west side of the covered deck. Much of what has been described is hidden by small plum trees in the view below. 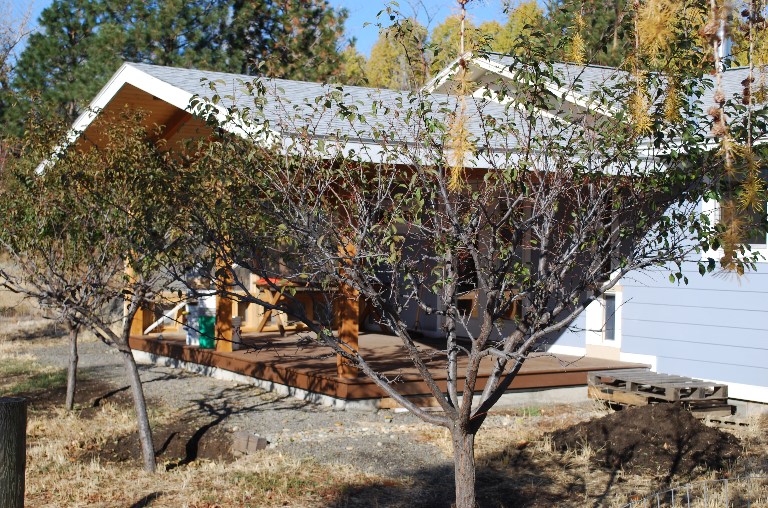 When viewing the next photo, imagine being in the corner of the room and looking out in the direction of the plum tree. On the lower left there is the magnetic-catch animal flap with a narrow window above. Next, the doors open onto the deck. Then another openable window. In the ceiling, note the opening – shaft – to the skylight. Also, we added flush LED ceiling lights; used throughout the remodel.
The next photo is from the entrance to the room from the rest of the house. 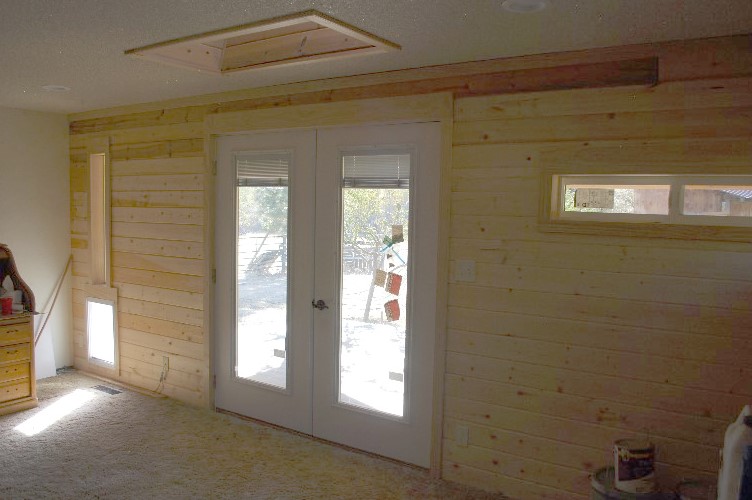 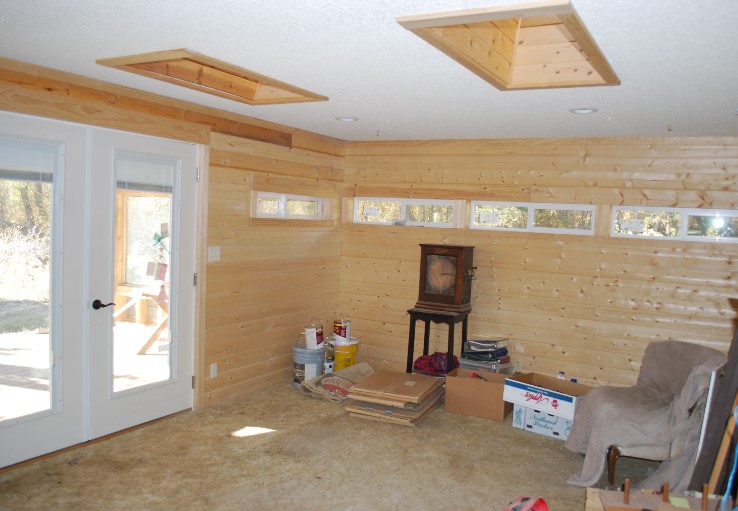 The original wood within the house was dark brown. With the remodel, doors and framing now look like this on a hallway closet. 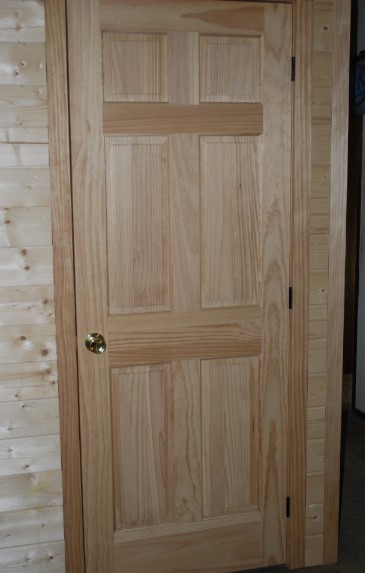 On the left there is knotty pine wood. This is just inside the front door.
Bedrooms and bath rooms still have the old dark wood. A new kitchen would be nice – it too was dark but a previous owner painted much of that light blue. I might take the blue and dark off, but not until several other things get done. (I did a small test.)

While the house projects were being done, I did cleanup and landscaping. However, in recent months I’ve been working on the wood supply for this winter, and for the following winter of 2023/24.

Once placed in the sun to help “season” the freshly cut pieces, it has now been moved under cover.