Here is a picture of Sue (mother) and Woody (daughter) that I used in January of 2020: http://rocknponderosa.com/?p=10197
Some of their story is on that page. Sue died this Wednesday, age unknown. Years ago, I captured them and had both neutered. After the garage conversion, I brought them inside (fall of 2020). Her coat had started to mat, causing me to think she wasn’t very well insulated. I had been able to pick her up for several years, but not Woody. Now Woody is able to be touched, but still not willing to become a friend. I’m working on that. 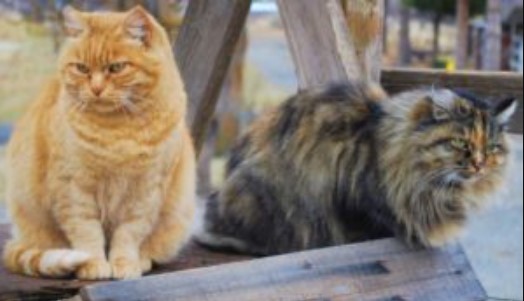 Washington does all elections by mail. I filled my ballot out on Sunday and dropped it in the box at the Court House on Monday.
Then I took a large tin of fancy cookies (from Costco) to the CPA’s office and thanked them (esp. Jessica) because the last of my tax refunds came a few days ago. After being behind 3 years, I am now current with the IRS.
I filled the truck with gas and visited five retail stores.
Tuesday was routine, but Wednesday I manage to run the gas out of the riding mower and only 100 feet from its winter resting place. I used the truck to pull it the rest of the way home. I’ll take the battery out and bring it into the pantry. I need to use the chainsaw a couple more times and then run it until the gas is gone.
I met a newish neighbor, living ¼ mile north of here. I met her horses first.
The context is that a local rancher moved cattle from the hills north of us to his pastures here on the Naneum Fan. A case of “transhumance” . . .
https://en.wikipedia.org/wiki/Transhumance

. . . a seasonal movement of livestock between fixed summer and winter pastures. When the cattle, dogs, and riders came past the two mares, they decided to follow, but detoured at my driveway. I tried to cajole them to follow me without much luck, but the owner was walking the road. I called to her and the two of us, with a pail of grain, returned them home.
There has been snow over the western U. S. and while it has melted at the lower elevations, including here at 2,200 feet, the elevations above 4,000 feet still have snow. That can be seen here:
https://atmos.uw.edu/images/vis1km_color/202211102241.jpg

Thursday evening, I check my boxes of onions and found two that were spoiled.

Out they went, but this makes we wonder what happens in commercial operations if one goes bad and touches another, and another? From what I read, a temperature between 40 and 50 degrees makes them last longer, but I can only store at about 68°F. Oh well, I can handle a few spoiled ones.

The post following this one has house remodel photos.