The work crew did some painting on the house this week. Also built the landings (forms) at the doors that were added last year.
Large screws were added inside the shed, going up into the trusses. Netting was delivered – to keep birds out of the space. There won’t be a “ceiling” – the net will handle that function.
The landings at the two doors need covered and the net needs to go up.
None of this is exciting or picturesque.

Ill-cared-for domestic Iris bloomed this week. The onions want to bolt. It has been too cool for them. Those that bolt won’t store well. It is a good thing I didn’t plant tomatoes. Night-time temperature hasn’t stayed above 55° – but will next week. Those that planted tomatoes will be way behind.

There is always something:
Four years ago we had the riding lawn more reconditioned. I used it a couple of times and then a rear tire went flat. So it sat until this week. I’ve got grass so high a couple of fawns wandered through and only their heads stuck above the mess of weeds and pasture grass.
I had trouble getting the tire off, but did. A tube was needed – $35.00; and a new battery – $77.00.
It took me a day to find the key – ’cause just about everything in the house has been moved several times. It started right up – after I added gas. The gas that was there evaporated and apparently nearly killed the carburetor. Thus, while the engine started it stalled with asking it to do anything – like move.
I’ve ordered a new carburetor: $109.52 + tax of $8.87. It is to arrive Monday late afternoon. I’m busy Tuesday, so – if the machine then works – I won’t get started cutting grass until next Wednesday.
A recent, partially completed, project is a sundial in the native flowers. It is called an analemmatic dial and is a favorite of young folks because the person needs to cast the shadow that points to the approximate time. In the drawing the shadow points to 2 pm. This is not meant to tell actual clock time. Rather, it should make a person think of the height of the sun. The girl is standing on April and her shadow reaches the hour point. 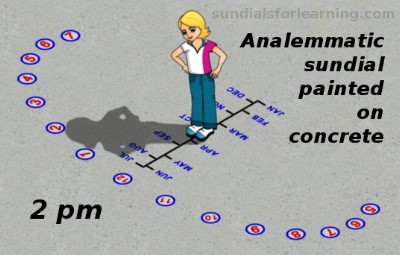 She would move forward in June and her shadow will get shorter. For January she would have to back up, but her shadow would get longer. As the sun’s declination changes the shadow maker has to move to compensate.
Often the signs of the Zodiac are near the center line and it is called the Zodiac. They would be positioned near the dates under the drawings that could be simply symbols. The designer may skip the historic aspect and use whatever one wants. I’m likely to go with simple.