The June solstice is the moment the Sun is directly above the Tropic of Cancer in the Northern Hemisphere. That is about 25 miles north of Havana, Cuba. For the Naneum Fan this will happen on Tuesday, June 21, 2022 at 2:13 o’clock – in the middle of the night. I’ll miss it. But the Weather Service thinks my temperature will get to 76°F, almost a real summer-like day.

After a difficult start, the onion sets from Texas are growing, although wind damage is evident. The native onions didn’t emerge until recently and are now blooming. As the ones from TX tried to bloom I’ve clipped them. I hope that stops the process because the bulbs of those will not store well. I can eat them now as “green onions” – and that might be the better solution.
I took photos Friday – – Onion, left / Phacelia, right 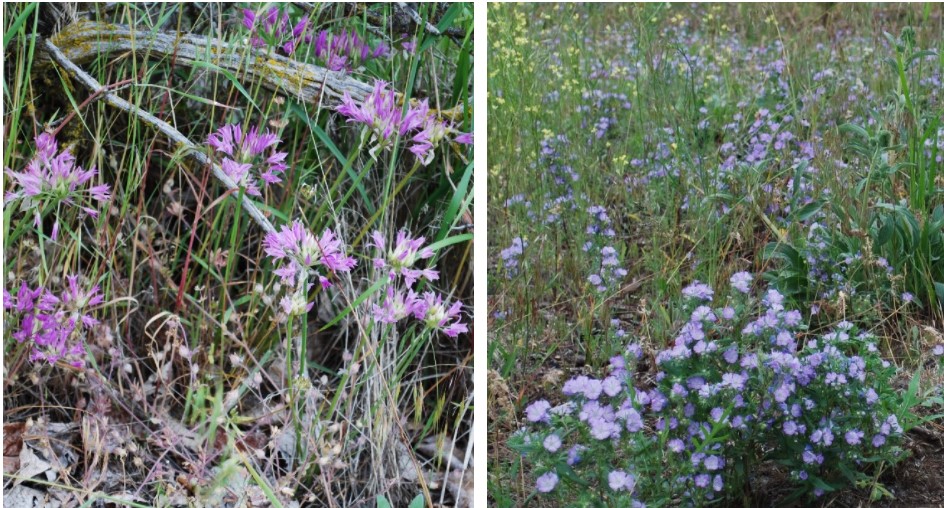 The cool and wet weather is great for the native shrub-steppe plants. Crowding encourages them to grow taller to get better exposure to the elusive sun. I’ve mowed and sprayed near the buildings in anticipation of a dry and hot “fire season.” There will be lots of fuel in Kittitas County.
“Haying” has started. I noticed one field that had been cut. Rain seems unlikely during the next week and strong winds will be good. Temperatures will remain below average for late June.

I put signs, using “duck” as a verb, on the gate with the low clearance. I put red paint on the top crossbar; not shown. I don’t know if there are standards for such things but even I (now reduced to 5 ft. 10 in.) can bang my head when not being careful. Entry ways (doors) built to modern codes will be no less than 6 ½ feet, while head clearance on stairs is set at 80 inches (6.67 feet; some say 6′ 8”) – Walter (contractor) says 7 feet for my entrance ramp.

Warmth: If the night time temperature is above 55° and the wind is negligible the house will keep above a decent temperature – 68 to 70.
Mostly, so far, one or the other of those things, or both, fail to happen. This is mostly the cool wind, often in the mid-20s mph or into the 30s. With lots of wood of not good quality, I light a fire in the wood stove almost every night. Mostly I have been burning old tree limbs I cut 15 years ago. Better stuff I am stacking for next season.

I am late to battery powered tools. A local store hypes Milwaukee Tools just before Father’s Day; Wednesday of this week. A company agent is there to answer questions and there is a hot-dog-wagon. Buy something and get lunch for free. 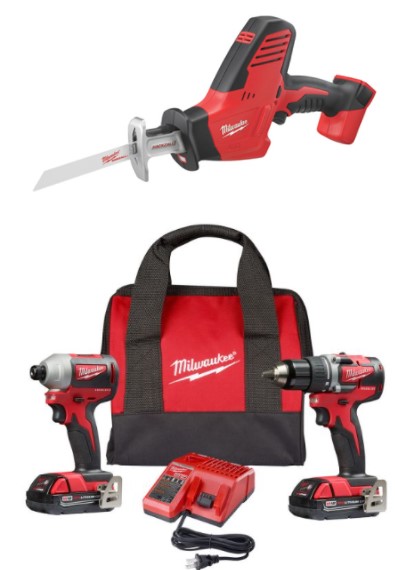 Last year I got the drill and impact driver (lower image) and this year I got the saw. The batteries I bought last year will power the saw, but I did have to buy blades.
I used the drill in reverse mode to remove hundreds of screws from the old camper I demolished last year. I started with one the contractor (Walter) loaned to me. That convinced me to buy one. I also had him cut an old pipe from the well with a saw. I didn’t buy one then, but I have now. I figure I will use it when I demolish the Pace Arrow motor home. There is also a blade for pruning trees. I tested my purchase with that.

The workers came (Monday & Tuesday) and placed concrete (4” wide x 6” deep) around the pole-shed where it meets the ground. I’ve had dogs, skunks, mice, and maybe a few other things dig under the slab. I suggest this ought to be done when the floor is being placed.
I took the forms off so the guys did not have to come back.

Keeping Track
from the Naneum Fan