Monday
A combined group of CWU retirees and Wildcat Walkers drove to a trail access east of EBRG and trekked to the newly opened Renslow Trestle.
The trestle was for the Chicago, Milwaukee, St. Paul and Pacific Railroad that came through the County, Kittitas, Ellensburg, and Central Washington University’s early campus. There are photos at the link below, but first a photo by me of friend Kristin making sure we document our own trip. There were about 20 folks that took the short uphill hike, then across over I-90, and back. It was a bit cold and windy, but there was a scheduled potluck for Thursday noon, so we only visited while we walked.

Previously the abandoned right-of-way was christened the John Wayne Trail. Now it is being re-signed as the Palouse to Cascades Trail.
The Renslow Trestle
A bridge over the Columbia River is now being reconditioned to remove the last major barrier to cross-State trail travel. 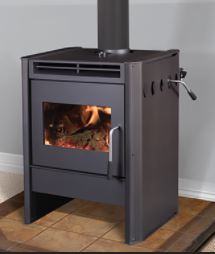 Tuesday
I cleaned around the wood stove, brought wood in, and started a fire. I set the house thermostat at 68° and brought the house temperature up to 73° with the fire in the Chinook Stove, with catalytic burner. The house air-handler has a setting for the fan to cycle on-off in 15 minute intervals so the entire house gets heated. (Photo from the web)
With the fire stabilized I went out and split more wood, and used the truck to pull previously cut trees to a convenient place for bucking {cutting to necessary length} & splitting for ‘22 wood.

Wednesday morning was interesting. The chart below has early morning (6:53 am) as the bottom row. Four lines up (starred) is mid-morning.

The purple colored numbers are wind gusts in miles per hour. At that time there were large snow flakes in the air. The sky was clear. There was bright sunshine. And there were gusts of wind up to 59 miles per hour. I stayed inside. There is a 50 gallon steel drum heading through the pasture in the direction of Idaho.

Thursday
I went to the pot luck with the CWU retired folks – driving across the valley 20 miles. Many of them knew Nancy; and me only as her spouse. There was lots of food and Christmas cookies & candy. I brought some home, including a few bites of smoked salmon. The host created that, and now I’m interested. It was very good.
I had to pass through EBRG, so used the opportunity to stop at two stores, then came home and fed the wild quail.

Friday
Phyllis and Cameron came and we took more stuff from the big shed.
The enclosed space with shelves had been cleaned out last week and became a temporary space for items to be kept – for now. Nothing exciting was found. There is enough for about 5 trips to the transfer station (dump) with the pickup. A Waste-Management dumpster seems excessive, but maybe the contractor’s one-ton tilt bed truck would fit the need. 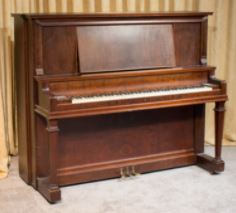 A large upright piano is still in there. It once looked about like the image here, but we got it in Iowa, moved it to Idaho, and then to here. It is another of my obstacles to peace of mind. I don’t know how or when we got it. We left Iowa in 1974, 48 years ago. It was old then and no one has played a tune on it since the day we acquired it. It is in poor shape with some damaged wood and likely filled with mice nests and related litter. The mice chew on just about anything. I need to look inside. Horrors!

Saturday
I worked at wood gathering – bringing trees closer to the house, and to the space next to the garden. When cut to stove length all the chips can be raked, gathered, and scattered for in-place composting. At 2:40 the wind changed and went from 5 to 15 mph and a strong gust. The airport claims 26 mph. That is strong enough that I don’t want to be near the trees.
The high temperature today was 51° – rather then allowing the fire in the stove to go out, it has been doing a slow burn. Still the hallway temperature went to 77°.

That’s it.
From the Naneum Fan