The week started with Kathy and Francisco coming on Monday. We attacked the boxes I had moved, in 2009, from Nancy’s office. These were in the big shed that has been used by the local Douglas tree squirrels for storage of walnuts and evergreen cones. Then they sit on the ceiling joists while eating and send debris over all things below. Mice have also gotten into stuff but left these double-sided apple boxes alone.
We investigated all the contents, with 99% considered trash. 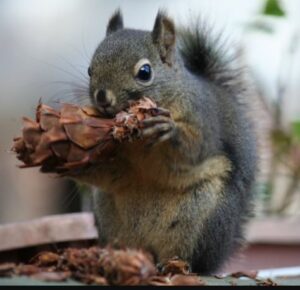 I backed the truck to near the doors and then parked beside the dumpster and the 3 of us heaved stuff from one to the other.

PHOTO: A Douglas Squirrel lunching on a cone of the tree from which the name comes. [An interesting bit of nature: https://en.wikipedia.org/wiki/Douglas_fir ]
I have several of these “false hemlocks”, but had to plant them here.

I sold my F350 to Francisco and he had the green bed repainted to match the cabin, plus he had a few other flaws repaired. We did more cleaning-out after lunch and then we took posts and rails from the milling I had done last year and made a flat triple layer in their truck’s bed. Next we loaded 6 bails of hay and a few other “finds” from the shed. Kathy wants to build a horse loafing (walk-in) shed, and will used the lumber. They left about 2:30. Because of other activities, they won’t come back for a month.

Phyllis came on Tuesday. We continued with the cleaning of the kitchen. I need to do some work therein, and put things away. However, 99% of the kitchen is clean. And another load went away in the Honda.

Wednesday and Friday – early – I was outside, completing the filling of the dumpster – including getting in and rearranging stuff to eliminate voids. Each day I also watered trees. The dumpster-carrier came about 12:15 Friday and all the junk was gone by 12:22.
Wednesday mid-morning I went to the grocery store – see next. In the evening I loaded a dresser, 3 chairs, and a few other things.

Daybreak Thursday I filled a box with yellow plums (branches and all), took Anne for a short walk, loaded the cooler, and then headed for White Heron Winery. I stopped at the Quincy Market for sandwich rolls (+ bonus 99¢/lb. Grapes). We bottled Rosé of Syrah for 4 hours and then had lunch. Afterwards, Cameron and I unloaded the things in the pickup. I headed home with newly bottled wine and a bar of candy from Phyllis’ stash.

Smoke and warm temperature combined for an unpleasant week. Here, 97° was high but over at the winery the station reported 103°. 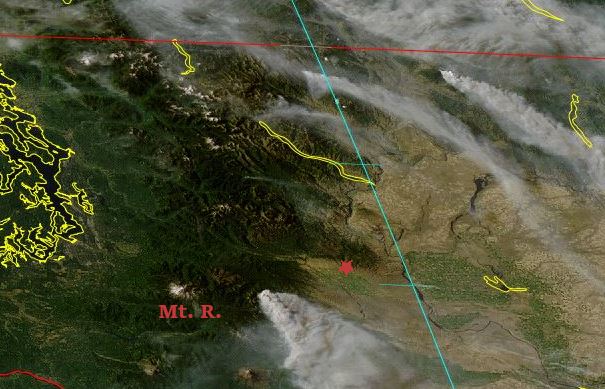 There are multiple fires in B.C., WA, and OR. Wednesday there was wind enough to make a nice satellite image, but Thursday and Friday the area was covered with smoke. Home is at the red star. The fire, about half way between Mt. Rainier and home, is called the Schneider Springs Fire. It is about 14,000 acres and continues to expand – started by lightning on August 3rd.
The photo at this link shows the steep terrain:
https://data.wellsvilledaily.com/media/uploads/fires.jpg

Saturday morning I watered 2 dozen plants and moved some rocks. The main project for Saturday will be getting the walk-in pantry ready for a chest freezer that has been in the “living room” for several years. The French doors onto the new deck will allow easy removal and transfer to the new location. It also needs defrosted, so I’ve been making ice, mostly in Powerade® bottles. With the double sided boxes, the ice, and a comforter (in American English) [a doona in Australian English, or a continental quilt (or simply quilt) or duvet in British English] to temporarly store the food, moving the chest will be less arduous.
My plan is to finish all the ice cream before the move, because ice cream seems to soften quite fast if not keep at 0°F (-18°C). Easy serving consistency happens at about 10°F. Softening and re-freezing causes ice crystals to grow – – to be avoided.
This move (freezer) will likely not happen until September.

I worked in the kitchen, not the pantry, today. I think the smoke has given me a case of procrastination. I do the pantry tomorrow. Monday is supposed to be cooler, windy, and smoke-free {Right!}, so I want to be outside.