We are looking for lows near or below 50° for several days.

Monday had an odd wind pattern – going toward the northeast – that brought wildfire smoke over the Kittitas Valley, and dropped blackened embers (not burning) over the EBRG area. That air was in a shallow layer, but 2,000 feet or so above the valley floor, and also compressed from above (different air). Under that smoke was a cool clean air flow coming from the northwest. It was half-dark until late afternoon when the sun got low and strong light came to the Naneum Fan. {I have a picture on the iPhone. I need to spend some time on that aspect of the phone.}

When Phyllis came on Tuesday she entered via the new room with the two female cats. Woody was surprised. I had the door to the washroom open and Woody scooted there, up on the open-top washer, and dropped inside. The top came down.
I got Phyllis out of the way and closed the door to the kitchen, then opened the top of the washing machine. Woody jumped out and went back to the room she is supposed to be in. She didn’t think it was funny. She hid for about 5 hours, but had recovered by supper time.

Phyllis cleaned the stove. I had new shiny pans for under the burners. When we finished – I helped a tiny bit – it looked as though it just came from the factory. It is so clean the rest of the kitchen (also clean) looks grubby. The previous owner painted (poorly) the cabinets blue. They get dirty with every touch. I don’t plan on remodeling the kitchen, but I want to get rid of the blue. I am going to strip the paint off the front of one drawer and see what the wood looks like. That’s all of the plan for now.

Because most of the excess stuff has already been carried away, we only had one small box to go to Goodwill. I do have a few bags of garbage, but not a truck load yet.

The Shiro plums ripened and birds were destroying them. I picked 3 pails, about 5 pounds each. One went to neighbor Allan, and two I took to the Fire & Rescue station. 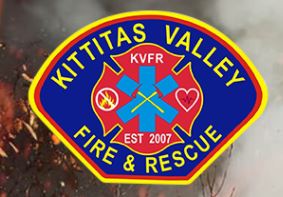 I asked about consulting with a “fire-wise” member and thus had a visit therefrom on Friday afternoon.
When the last big fire happened the folks visited houses and classified each in a data base. If the house is situated such that trying to protect it puts a crew in danger then it gets coded RED – they won’t go in. A place that is situated well and built of fire resistant materials, and likely will not be in danger of burning, is Green. This place was Orange – and they explained why. I’ve been working on this landscape/access wise. With the new stone and HardiePlank siding (fiber cement), the place now gets a poor-Yellow from Deputy Chief Rich Elliott. I’ve more to do, and will make a solid Yellow, I hope before next fire season. This means KVF&R would send a truck to protect the house, because it will be easy to defend.
The two things I most want to do is finish the circling road, having gravel and rock inside that; and (2) get HardiePlank on the two exposed sides of the big brown shed.
The situation here is never going to be “Green.” That’s when a place is deemed to be safe from a wildfire without any (potential) intervention.