The original (first) text follows the update of Saturday, the 6th.

This meeting is reported by John on the page about my health at the link above.

Started hailing at 11:57 AM, then quickly switched to snow. We got an inch that soon melted. We were headed to town later and saw no evidence of the event just a few miles south.

I sent thanks to photographers who took photos we posted last week. Following that, I completed the weekly chore of putting medications in the dispenser box. This takes a surprisingly long time because of the number of different pills, and that there are changes based on the latest blood exam.

A great local sighting of an Owl. Jeanne actually took it at her boy’s school on Chestnut at 12:30 on January 21st and posted on the Kittitas County Visual Delights site February 4. She was kind of embarrassed it wasn’t out in the woods somewhere but it was so cool. It hung out for a whole day in the school yard, while the kids ran around playing. It was so close too!

We often hear owls near our home NE of Ellensburg. Sightings are often at dusk because the hoots are frequent, so triangulation is easy. John has taken a few photos but it requires going during daylight to where he has heard the birds (Great Horned) and inspecting lots of trees. Most of the time they seem comfortable with the observation. The bird in the photo below seems oblivious to the attention. 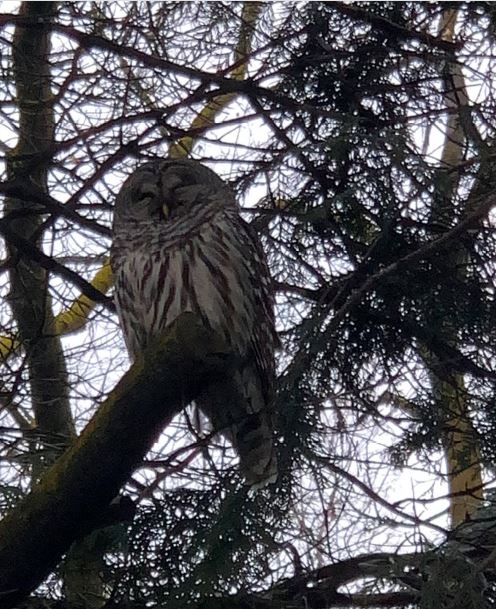 Started at 4:00 am taking pills, tried going back to sleep; couldn’t so had John put my computer on a pad in my lap until I fell asleep at some point, maybe 6:30 – so not a restful night. Again, tried sleeping in until 9:30. Up, called Doctor’s nurse in Cle Elum with swelling problems on cast in sling. They returned call with options for wrap and cast. He did take the lower 4 inches or so of the wrap off and released my thumb. We will reassess tomorrow, hoping the swelling in my fingers improves.

Slept in late. Setup Alarms for day. Took morning pills. Added pain pills at 9:45.
Hand in cast has less swollen fingers, so we are not doing more.
Zoom on AAC Game Noon day

The laptop fan arrived at the repair shop, ComputAbility. They wanted the computer about 1:20. John delivered it and then made stops at other stores. He picked it up and made it home about 3:40. The new fan is silent.

Double Rainbow at Fairgrounds photographed by Tamie Schaut. Saving the story for next week’s blog.

A dull day. We did the things we had to do, and not much more. John moved a few buckets of rounded rocks to under the drip line of the walkway. There are also some additional landscape rocks, specifically some with noticeable growths of lichens. He can put a phone handset near where he is working and I can “beep” the intercom function if I need help.
He does the “Not So Nasty News” on Fridays. He has also worked on the “health update.” I’m struggling to get computer stuff done with my left hand. Two-handed chores are on hiatus.

Slept-in till 8:00AM after windy night. John hoped to get “Nancy’s Health Report” out to the web by Noon. That was delayed some because Pat Jenkins wanted to come and get the remaining logs. John had to take a break and show him what to cut and take.
The link to the health update can be found above, just below the heading.

We are watching the cold air move south, out of Canada, and slowly covering most of the two nations. Back east, where it is now Monday, the freeze line is at Georgia’s north border, and covers the north one-third of Alabama. Sister Peggy, near Cleveland is down to 9°F.
Earlier in the day we talked with her for over half an hour. Like us, she is eligible for the Covid vaccine – and like us there is none to be had. We are “cool” with the situation, but others around the nation are showing various degrees of anxiety.

Hope your week was fine,