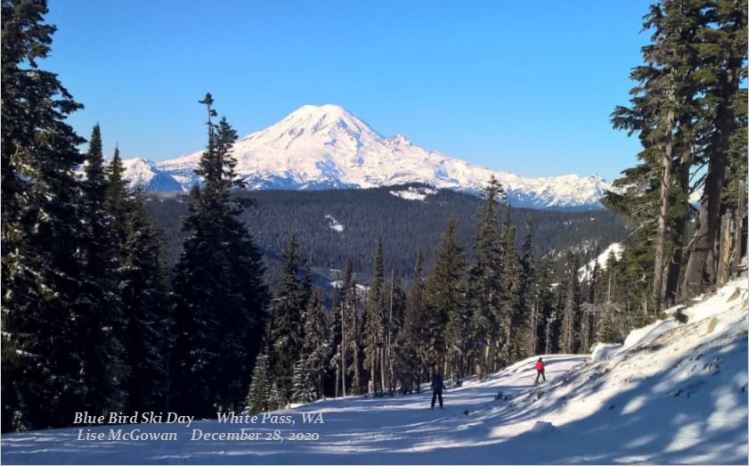 John did all the work on the cleanup of the stuff in the Curved Glass China Cabinet had us up at 7:30 to begin cleaning up stuff around patio doors inside our den. I got a little more involved with drying the cleaned stuff and storing those elsewhere. The process slowly continues. Need to do more soon. John’s gone to bed, and I have about 20 more minutes until I can take an acetaminophen, fluoride my teeth, put my gen teal drops in my eyes, and go to bed.

We left home, John driving, so I could make phone calls. I had two blood-draw tests noonish blood draws at Med Arts building on Jackson Street. We dropped off a red package of blood vials at KVC hospital front desk. While there, I called Cle Elum Medical to leave message for Nurse Lacey.

From there by AAC on to drop off package for Katrina,
then Super 1, then we went by Amy & Haley’s with ceramic things and Raisin mini-packets. 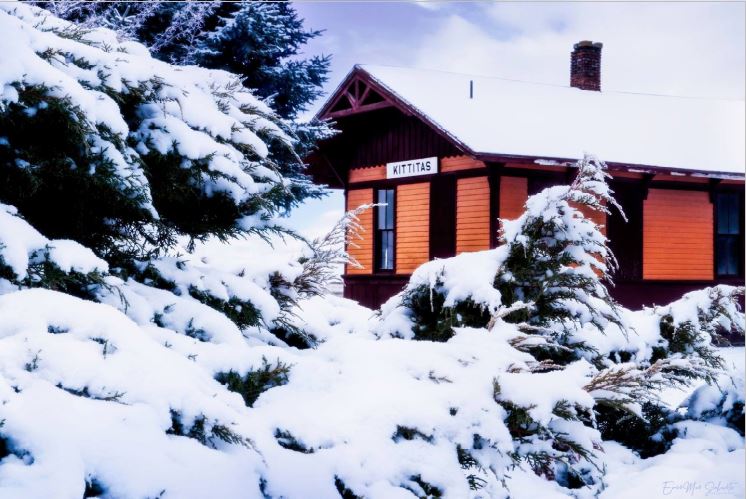 This photo in the snow of the Kittitas Depot is awesome taken by friend EvieMae Schuetz.

At 10:00 a.m., James Hickey at Umpqua Bank set up payment to Davenport’s for finish of one of the remodel contracts. Checked with Lyn; later will get a USPS notification the money has been deposited in their business account there at Umpqua Bank.

With this telephone and digital transfer, and not going in person to the lobby of the bank, I’m a happy “kamper.” James Hickey has done this previously and sent to the Davenports and also delivered to us for our records. I’ve also dealt with Brandy, but she is off this week. Didn’t get this done until noon because he spent longer with a bank client, & went to his lunch before calling me.

John went to start his car to leave for Cle Elum Clinic. He left at 10:30a.m. and has an hour (roads okay, but he went the Interstate rather than the Old Hwy 10).
John plans on calling me from the road to report in on the snow situation on timing his trip to Cle Elum for his appointment. He doesn’t want to cancel because of snow that they have in Cle Elum today.

John called at 12:18, they got his ears cleaned out. He is heading down the Freeway to buy gasoline at Pilot, and plans to call me from Bi-Mart Parking Lot in 45 minutes. Going for wild bird seed.

Week coming will be busy. I have two appointments we must go to Tuesday & Wednesday, which John must drive me to. He still have a pickup load of fine horse manure to deliver to the vineyard. And the remodel crew may want to come start on the next project.

I have adjusted to putting a pillow on the end of my recliner because just putting the swelled legs down on the recliner HURTS them way too much. The pillow is difficult to manipulate from the table to my right, but I can manage the pillow while using my laptop not to have the severe pain pressure without the pillow.

However, Chelsea needs to know I still am having slight instability factors, e.g. at the Medical Arts Bldg. Lab yesterday where the better K test was performed, but still some, difficulty moving around the house, some painful muscle movements today, changed from the leather shoes today and now using an open non-laced shoe for walking, but still have on same socks.

Lunch: John came home with Super 1 fried chicken we warmed and had with peaches. He also got some cans of tuna to share among the 4 cats.

Supper: Spaghetti with ground beef in the sauce and pieces of cook chicken cubes, grated cheddar cheese, and I had Cheez*its spread around the edge of the bowl.

We soaked washed dishes in the dishwasher and ran it. 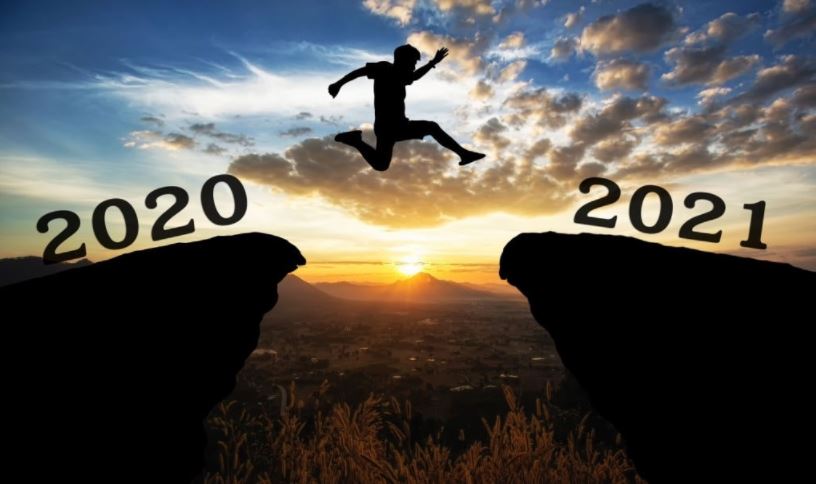 We snagged this image from the web, so have no information about it. Odd thing is that the photo is not taken from Midnight.

Seems more like sunset – a good time to celebrate, and then go to bed. 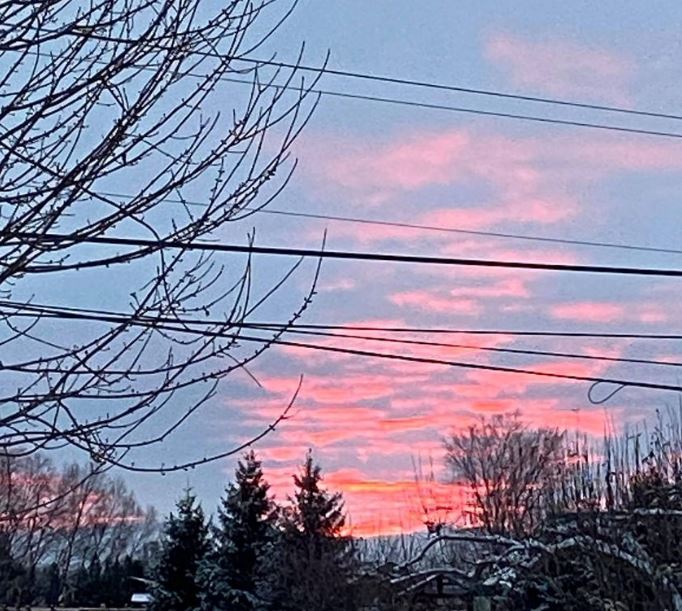 Last Pink Sunrise of 2020 photographed by Janet M. Downs, who only saw this for 8 seconds. 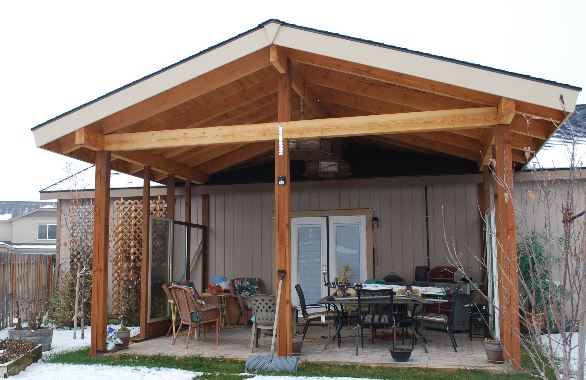 8:46 a.m. we received a phone call from our Contractor Walter, wanting John to view a post & beam patio cover he had built in EBRG. John took off soon as he could to meet him at the home. Here is a photo, but ours will be a little lower and a bit wider. Details in a later edition with our own version over our patio.

Skipping Zoom Game Day today at 11:00 AAC to work on the den moving project. Game was going to be Pictionary.

Lunch: We ate at 2:00 p.m., after blending me a Smoothie Low potassium content. (We re-wrote the recipe on Fridge door). As dessert, we each had a piece of Claxton, GA fruitcake (a Christmas gift from our neighbors, Gerri & Allen Aronica, who likely don’t know I was born and raised in Atlanta, GA! And also, need to thank them for a Jar of Honey made from bees on their property, just a 1/2-mile up the road from our house. John had a grilled cheese & deli ham on one piece of large Wheat bread, folded over & sliced.

Tried calling sister at 6:00, but no answer at either phone; she called back at 6:16 and we decided the phones were at fault for her not answering. We discussed my current medical issues, so I must contact her again after Wednesday’s appt in Cle Elum.

I have large swelling of my legs, calves, and feet beneath my knee. NEVER in my life have they ever been this huge. I have had them raised now since 6:00 p.m.

Sleep: interruptions off and on throughout the entire night by a “dream” awaking me over and over. We have got to get to the bottom of what is causing this disruption to my nightly sleep pattern.

I have more blood draws test this coming Tuesday to see the results. That will last for the next two months. The Potassium test is being continued. I am faithful my medications. On Vitamin K, I have changed no food intakes, except suspended taking the Ensure with the high amount of Potassium. My doctor restored taking two medications related to potassium lowering, and increased my Furosemide to daily up from every other day, with the hopes of decreasing the incredible swelling side of my legs, thighs, ankles, and feet, and will examine me in the office in Cle Elum, also to view the bruising, and blood in contact with the fall outside their building, when my muscle stability tossed me down on the concrete sidewalk.

When the phone rang this morning at 8:43 and John had to leave, I was sleeping intently, and awakened abruptly. A neighbor needed help – it’s a long story – but the short of it was she needed to make long distance phone calls and doesn’t have that on her phone contract. John was going to use the Bluetooth in the Subaru, but would have to go toward EBRG.

John left the house at 8:43 a.m. – returned at 10:45, and is now out feeding horses. I’m doing my morning activities with computer and medications. Additionally, the first day of a month means redoing certain charts for keeping track of daily measurements, morning and night.

I slept in even though I had a good night’s rest, and John slept in a little longer too but got up to take care of the cats, quail, horses, and other things. John is cleaning out kitchen cabinets of china cups, saucers, plates, bowls, we no longer use, don’t want or need to donate to Naomi’s Hope charity.

Brunch: A piece of ham, 2 eggs over easy with a little cheese, small bowl of peaches.
Supper: Best part was Butternut Squash cubed and baked with Mini-marshmallows on top.

Decent weather so John cut brush for an hour just west of the house. A fire reduction action. Most every thing else was standard stuff.

Supper: Stew, potato tater tots, I had Cheez*It on the side of my bowl. PowerAde for drink.

Late Sunday night, 1/3/20, my Sunday Night’s blog will create its own new Live Link for the third day of Jan, 2021, from which to begin next week’s blog. Probably will just finish Sunday, and start afresh. Actually, I know we’ll be getting ready for appointments on Tuesday in Ellensburg and also a Wednesday trip to our PCP in Cle Elum.

I’ll have to take my camera along, in case I see a photo
opportunity that I can post on the Kittitas County Visual Delights site.