I don’t know how I got over the hill without getting to the top.
{Will Rogers} 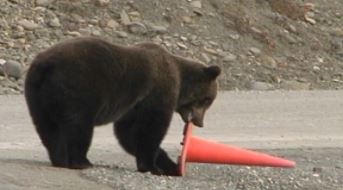 Upon first seeing this video, I though it was likely staged with a trained bear. I found the following site with some explanation, so with some hesitation I am willing to believe. It is a neat maneuver, in either case.

Similar: There is a story of a small owl riding on the co-pilot’s seat of a water-dropping helicopter:
Helicopter Owl Just a bit of info and a photo. Maybe a Western Screech Owl.

And from San Francisco, this about Maki, an arthritic Lemur: “Police said Friday they arrested a man suspected of stealing a ring-tailed lemur from the San Francisco Zoo, where officials rewarded a 5-year-old boy who helped recapture the endangered primate with a lifetime membership.”
My first thought was that Maki already had a lifetime membership at the Zoo. I think I’ve figured it out, though.

Story with photo from CNN: Link, so click here.

In this case the helper was well meaning, but not without fault. I’ve worked on numerous hiking trail bridges. Here’s one: a major project near Liberty Lake at Cedar Grove:

If you glance at the end of the logs in the photos [see #18 in Part Two, and following] you can see we built a rock filled wire enclosure (gabion) with plates under and steel rods extending up. A large wood beam is on top, with the threaded rods sticking through for washers and nuts. Then, iron (rebar) goes through the logs into the wood beam.
In the photo below there is nothing of that sort. The support logs (stringers) going across the “creek” are small and rest on the ground.
I used quote marks because the creek is dry. Not much imagination is required to envision roiling water pummeling this new bridge. 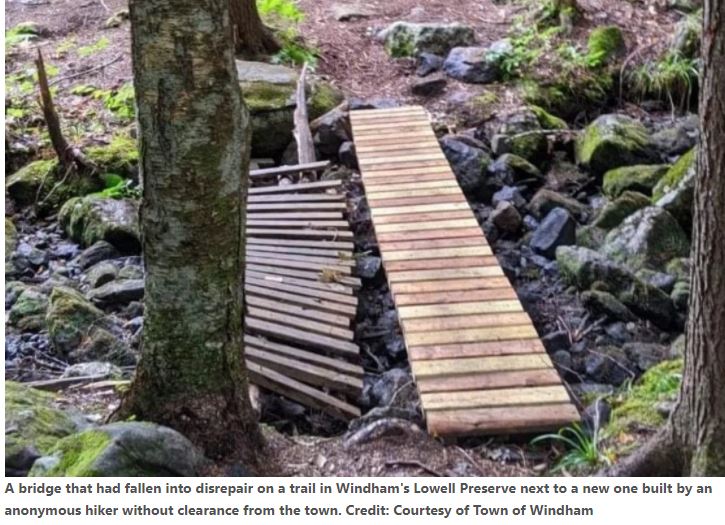 A Maine town is trying to identify the person who built a replacement bridge next to a collapsed one along a hiking trail on a popular 308-acre preserve.

Although its one-person parks and recreation department routinely receives calls about felled trees or animals along the path, Windham town manager Barry Tibbetts said the broken bridge had not been reported to the town, which maintains the preserve with help from partners.
A related problem is that the town, now knowing of the bridge, has a safety and liability issue, and will be “inspected for functionality.”
My guess is, they will have to bring it to modern trail standards, or take it out. Search-up – hiking trail bridges – for ideas. 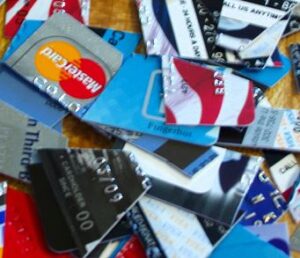 On August 4th we went to several places to shop. Later, for a reason I’ve forgotten, I realized a credit card was not where I thought it was. We called the card company and placed a “hold” on the number. I expected the card would show up in the car, or a shirt pocket, or under a book or newspaper. It never did.
Finally, this Monday morning we called the card company again and had that card removed from the system and a new one sent. Cased closed? Not quite.
We got a call in late afternoon from a neighbor that works at Fred Meyer. One of his duties is to handle credit cards found in the store. He recognized the name, and brought the card home. I forgot to ask where the card had been for the previous 10 weeks.
The trip to the store was odd too, and might be related, but how, I don’t know. I could have just dropped the card in the parking lot.
When I started unloading the cart at our car, there was a bag in which there were several items we did not purchase. A helpful “bag person” had drifted by and helped load things at the lane we were in. One of the items was a large bottle of whiskey; easily seen sticking up in the small plastic bag. Definitely not ours.
I carried the bag back to the check-out lane and explained the issue to the young lady there. She said the bag was left off to the side so its owner could visit the loo. The floating “bagger” wasn’t aware of that, so he put it in our cart.
That was weird, but doesn’t really explain the missing credit card. The really weird bit was cancelling the card and the neighbor calling within hours, after a 10 week interval.

Item #4: Smartest person in the room 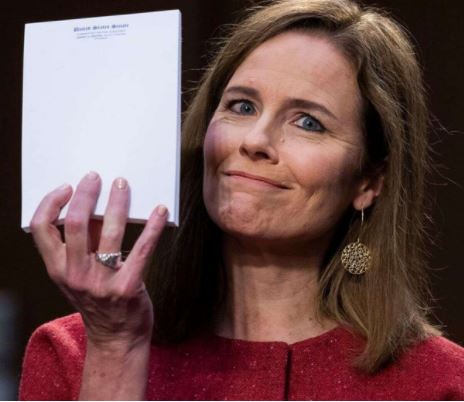 She seemed to have all the facts, and they wondered if she had notes in front of her.

Supreme Court nominee Amy Coney Barrett holds up her notepad as she speaks during her confirmation hearing before the Senate Judiciary Committee on Capitol Hill in Washington, Tuesday, Oct. 13, 2020. {AP photo]
She was asked: “Is there anything on it?”
“The letterhead that says ‘United States Senate’,” she responded. 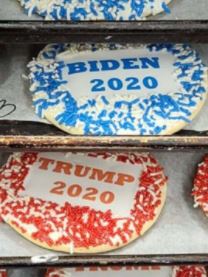 Surprisingly, to me at least, is that the place is making and selling these things to the exclusion of everything else one expects to find at a bakery. Operating procedure is to make, sell, and close for the day. 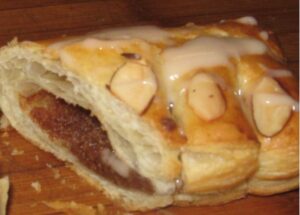 Explanation? Maybe if there are none of these, irate political types would throw a shoe through a window. But what if I want a “Bear Claw” pastry or a loaf of bread? Either is more appetizing than a decorated sugar cookie.
Nail the cookies to the side of an old shed, I say.