Mose Triplett enlisted in the 53rd North Carolina Infantry Regiment in May 1862. He fell ill as his regiment marched north toward Gettysburg, and he remained behind in a Virginia military hospital.

He ran away from the hospital, records show, while his unit suffered devastating losses at Gettysburg. Of the 800 men in the 26th North Carolina, 734 were killed, wounded or captured in the battle Pvt. Triplett missed. He left the hospital, found a unit of the Northern Army, and fought for the other side – thus entering the books of the winning side – earning benefits for his offspring from the US of A.

The Wall Street Journal carried this story and had a previous one in 2014. The WSJ requires a subscription. Other sites may have similar histories of Irene and her family. Here is the link to the 2014 article, Civil War & the Tripletts 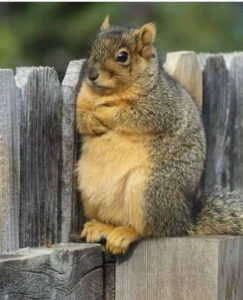 This photo appeared on the web (source unknown). Is the squirrel cold, annoyed, or waiting for a turn at the feeder?
Our local residents are the Douglas Squirrel. They eat the seeds of pine cones and we are just at the edge of their habitat. On the map at this site ( Link) Kittitas County is near the center of the State, and only the western half, the mountain part, is colored green. We know they eat black oil sunflower seeds and the walnuts.
Ours always seem to be moving or eating. Or making noise.

Above are 3 of our Iris that started blooming this week. Because they get tall, our Kittitas Valley wind can cause disarray in the flower bed. The lack of rain means I have to water them.
The name – Iris – appears to come from a Greek Goddess, and words such as “iridescent” derive from this word for rainbow. If you want more of Greek Mythology, here is a Link.
If you do a search with just the word “iris” using the images tab you will see lots of flowers. Search using “Greek Goddess Iris” to see artistic visions of the Goddess. Note that some have her carrying a pitcher, but whether for water or other liquid I could not find a good answer.

Item #4: Light at the end of the tunnel 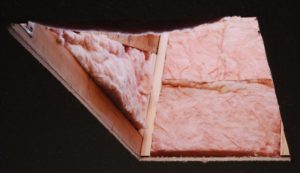 Our garage did not have insulation above the ceiling, but such is required for living space. The contractor included this in his bid, but I wanted the rest of the house insulation rejuvenated or replaced. A representative from an insulation company from Yakima came for a visit on Monday, and wanted to schedule us for next Tuesday.
When we had new shingles put on the roof a few years ago, we installed 3 skylights. We did not do the cuts in the ceiling and the shafts. So the issue is to get all 3 shafts boxed in and through the ceiling so the insulation can be placed, without a future disturbance. Two of the three are almost done – early photo above.
But here’s the rub:

While it was great to see the light coming into the room, we likely won’t see the light of the full Moon. Full cloud cover tonight, Friday. Bummer. Monday will be our best view with about 94% of the Moon illuminated.
The shafts are finished with naturally light-colored Knotty Pine that appears to give the incoming light a soft glow. More experience needed. 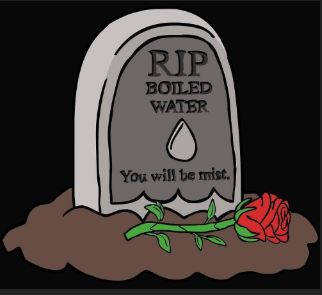 We were sent a long list of puns; here are a few:

1. She was only a whiskey maker, but he loved her still.

2. A fellow in a kayak was chilly, so he lit a fire in the craft. Unsurprisingly it sank, proving once again that you can’t have your kayak and heat it too.

3. Two hydrogen atoms meet. One says, ‘I’ve lost my electron.’ The other says ‘Are you sure?’ The first replies, ‘Yes, I’m positive.’

4. The fattest knight at King Arthur’s round table was Sir Cumference. He acquired his size from too much pi.

5. No matter how much you push the envelope, it’ll still be stationery.

And I’ll add this one:
What do the Irish call a fake diamond ring? A shamrock.