Up early and back to bed. Still tired.
Walter came after 7:00 a.m. and painted the ceiling with a textured paint (in the remodeled room), to be followed by John choosing a color to paint – intended to complement and contrast with the floor tiles. John and Walter looked at the samples at Knudson Lumber & supplies store. John says the indoor lighting fooled him some. He wanted pale lavender or violet, less pink. 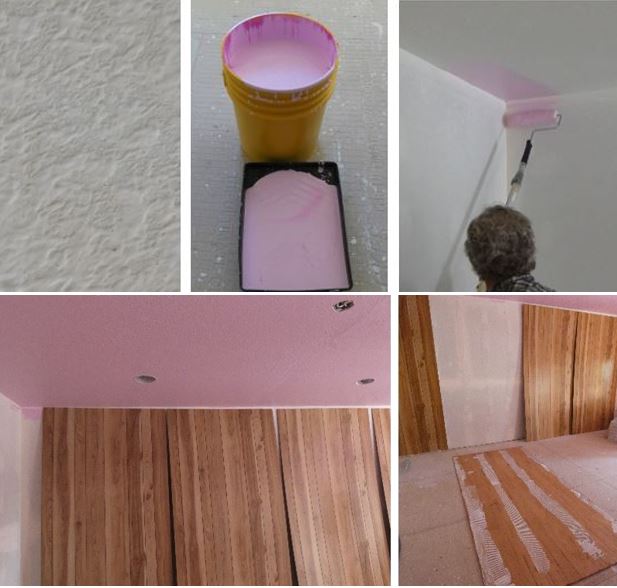 Top photo shows the textured ceiling, the bucket and can of paint that looks rather pink, and then once applied is more lavender (maybe). The bottom photo (left) shows panels leaning against the wall. Ceiling electrical openings are there – without the actual LED part. On the right is a panel with adhesive (on the wall too). Small nails hold the panel up while the glue sets.

I’ve been working on suggested background materials to send to the study group for Nick’s Livestreaming Geology lecture tomorrow on Ice Cores. Finally, finished it late after 5:00 p.m.
Set up getting Susan Leiberman the detailed notes for Karl’s Steamboat Rock field trip (and Northrup Canyon) for her planned hike. She’s driving down from Gifford, WA on the Columbia River. 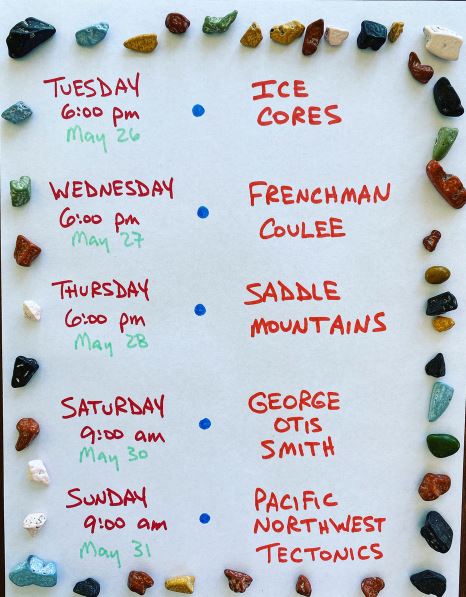 Morning to take my special pill on an empty stomach and not allowed to eat until ½ hour afterwards. No morning coffee even. Really a PITA.

John left early to meet Walter at Knudson’s at 8:30 a.m. to pick out a special color paint for the textured ceiling in the newly remodeled room. Will be interesting what John chooses: I thought he said he chose light purple, but in the daylight he says it looks more like a light pink. You’ve seen the results above on Monday. When all wall panels are up and the floor is down we are sure the result will be spectacular.

Last night my phone in my back bathroom (one of 5 Panasonics we have in our house started talking that it had no battery. It has 2 rechargeable batteries – AAA. We expect either this phone needs replaced or the rechargeable batteries have died completely and need replaced. Either way, it doesn’t work, so I’m carrying another phone with me to the bathroom, when I leave the den.

Called Bi-Mart asking questions about rechargeable AAA batteries. Our Panasonic one in handheld phone cannot be recharged, on the phone mount or with a unit. Does that mean the battery needs replaced? Wrong question. Turns out 3 of our sockets were not working at all. I finally figured out my cell phone was not able to recharged in a socket in a different bathroom. We threw all the breaker switches that had lights or plugs noted, and couldn’t get power. This took a couple of days to realize the entire story. Follow it below on Thursday.
I have been sorting tax receipts for 2019 and 2020. And still have a lot to go. I washed a load of dishes, and need to put them in the cupboards.

Found a card to send to Peter Schuetz for his graduation from Kittitas High School. Because COVID-19 cancelled all graduation activities sadly, the graduates are going to stand 6’ apart in the driveway of the school, hold a basket, and people will be able to drive by and throw cards in a bucket.

Our contractor’s wife, Lynn, came along this afternoon to paint primer on the textured ceiling. Walter had to drive to near Bremerton (3 hr. trip) to have his painful back worked on.

Tonight is a talk on Ice Cores by Nick and he had a special guest, join him, Susan Kaspari, an expert on Ice Cores, and his colleague in Geology at CWU.

We had a supper after the show – shrimp, fish, some leftover fried breaded cauliflower. No dessert.
I sent out a note to 5 new Zentnerds who joined our study group tonight.

Sent the PDF for suggested background materials for Frenchman Coulee (virtual field trip) with Nick on site and a good cell tower nearby.

Now trying to make progress on taxes and cleanup. Need to put all my medications for the week in container. Need to order something via Amazon for my severe dry eye problem. GenTeal Gel for Severe dry eyes may have returned. It was discontinued by Alcon, but I’m 99% sure I found it. Delivery is tomorrow and very much needed. It did come USPS delivery, and it is perfect.

John moved my car from its normal parking shed so he had a protected place to cache the package of wood paneling. It’s been in our hay barn for several years, and needed to be closer. My car was moved to the place where our new carport will be located.

Talked to Todd the electrician about our non-working sockets. He’ll stop by in the morning. Got his number from Walter (it’s long distance, but stored in our landline phone as Electric Todd). 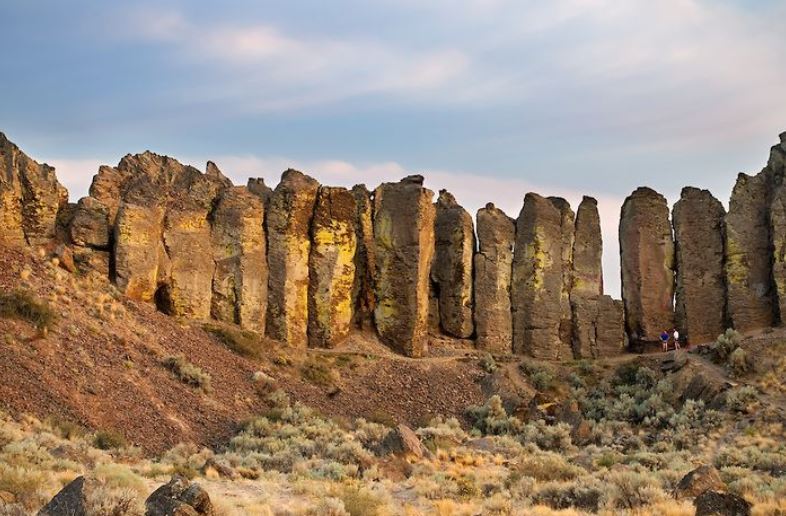 Climbing area, The Feathers, at Frenchman Coulee, about 45 minutes from Ellensburg.

Tonight was a virtual field trip with Nick there. You may enjoy watching parts of the trip in the link below.

Here’s the rest of the faulty phone and socket story. We were up early, for Todd the electrician. The outlets that did not work are on the same line as a couple of outside outlets. Therefore there is a Ground Fault Interrupter (GFI) for this inside/outside line. Who knew?
Well Todd did, and John knew the fix, but Nancy went with Todd to see what this meant. To fix the GFI outlets trip the red button that has TEST (in white). The paper label just has ‘GFI’ and does not indicate in-house outlets. So although the lights worked, the outlets below them did not. Now all do: 3 sockets inside the house (bathrooms), back bedroom, and two outside the house. They are now working, so our phones are not faulty. They are again working with their rechargeable batteries. I can charge my cell phone again in John’s bathroom and run my hair dryer in my bathroom.

Got the suggested Saddle Mountain background materials mailed about 10:00 a.m.

Walter arrived this morning, and his wife Lynn will be back later. He is adhering our paneling to the walls of the new room.

I dealt with a phone call this morning from one of the 4 pharmacies I frequent about my Atorvastatin. I’ll pick it up next Tuesday when we are in town. I buy it cheaper through GoodRx, and the cost is better to by an 80mg pill and halve it to get the dosage of 40mg I need every day.

I had to have a nutrition drink early to tide me over. Then for a late brunch, I had a Top Ramen soup without adding chicken breast meat as I usually do.

Now, however after a visit from a Labor & Industries inspector from Yakima, this morning, I have to search my pictures for all electrical wiring photos to email him. This should have been done back at the time the wiring was done and not after the fact when the walls and ceiling are covering it, and the circuit breaker box is no longer exposed with wires coming to it.

It’s taken me over an hour, but I have found a few stills and two excellent videos to share with the inspector, via email. I’m currently uploading the videos (one much longer than the other) to YouTube to be able to send a link to a 449 Mb file of information. (see below)

Thank goodness I have been documenting the remodeling job, or they may have had to cut into the wall boards to show the work had been done to code. Within a half hour of sending my email to the Inspector, he got back to me to thank me, and said that was sufficient information he needed to approve the permit. Phew. [John learned the inspector was a Brittany person. The family got a puppy when he was 2 and it died when he was 18. 16 years for a Brittany! Anyway, he and John had a nice chat.]
I documented some more of the paneling work today, some of which you have seen above.

Before hitting the hay, I searched for connections on the Internet to information about our talk Saturday morning on George Otis Smith, a geologist from early in the past century. 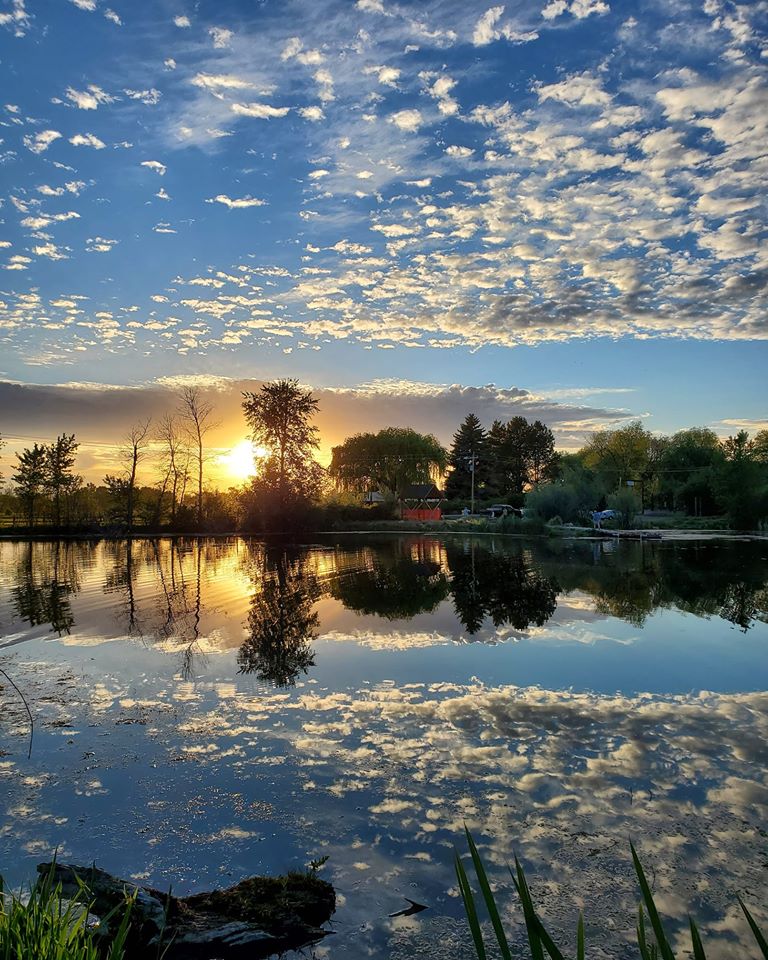 Ending tonight with beautiful sunset photo by photographer, Krissy Yarnell. She posted this on a Facebook site I’m involved with, called Kittitas County Visual Delights. South of us on Naneum Rd, 7 miles.

I was wiped out and slept in way too long still not ready for the day. I doctored my severe dry eye syndrome (right eye the worst) with newly arrived medication.

Started with compiling the suggested background materials to send to the 65+ members of our Nick Zentner study group, adding a link sent by one of the group last night.
Then worry about the other stuff. Load dishes.

One of the saddest emails I have had to construct occurred today to notify our music group, the Kittitas Valley Fiddlers & Friends, about the deaths of two former long-term members of our group. We lost Dr. Dave Perkins (Double Bass player) and Jeanne Gordon (previously accordion player since the 1950s, and then the tambourine), after she could no longer hold the weight of the accordion. Janet lost David in April this year, and Gerald lost Jeanne yesterday.
Dave is suspected to have had walking pneumonia, and went downhill very fast, while only a few days before continuing to help carry residents their meals and needs. Janet received a call to come be with him. She was able to stay with him, and share their memories.
Gerald saw Jeanne in the morning, visited with her, and went home. He received a call that she was not doing well and the family should all come to the Rehab, but she passed before they got there.

Worked some looking for links to put on the suggested George Otis Smith background to send tomorrow.

No livestreaming video lecture from Nick Zentner tonight; his day off (along with Monday). So in the time slot at 6:00 p.m. PST, we’re going to enjoy music virtually, with our study group member, Kathy from Australia.

On for capturing comments and conversation around the world at 8:00 a.m.
‘Nick from Home’ Livestream #54 – George Otis Smith

Wow… good we had no backyard Nick tonight, as it would have been during a storm. 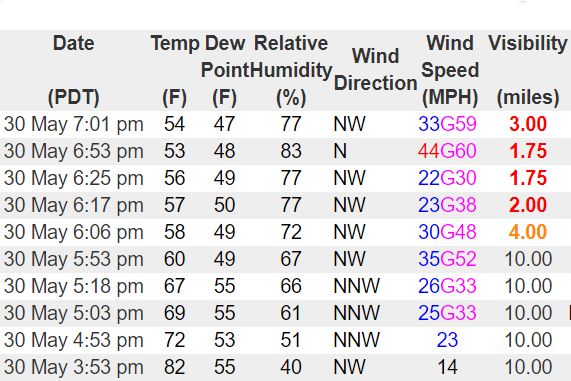 Here’s a better summary of the weather for the Pacific Northwest Region with great videos and maps, of our stormy weather today. We were missed by the lightening and thunder, but got rain and wind. Rain stopped, but not the wind.
Cliff Mass is an Atmospheric Scientist at UW), in his mid-60s. Here is the link – well worth following:
The Main Act is About to Begin, But Lack of Radar Coverage is a Problem

John left at 8:50 for White Heron. Yesterday he loaded a heavy dirt mover and a less heavy snow plow (attachments to a backhoe/front-end loader) we own, but don’t use. The local John Deere center just tuned it for us, and we are loaning it to Cameron for the vineyard. Our soil is mostly compacted rocks while the vineyard is almost all sand. The Ice Age Floods deposited the sand. John cannot go tomorrow because he must be here for Allen Aronica to come down and dig 4 holes for the walkway posts. Sonotubes will be used (more later). Allen has a digging machine (more next week).
John returned at 12:40 and then we had chicken/veggie soup for lunch. He found a chore out of the wind for some afternoon work.

Among other things, I have almost completed the writing of the blog for this week. Interrupted by supper.

Supper was a bowl of chili and an ear of sweet corn.