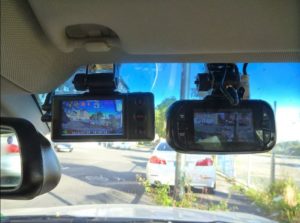 Never heard of Scappose, Oregon? Me neither.
The name “Scappoose” is of Native American origin, and is said to mean “gravelly plain.” This apparently refers to sediments along the edge of the Columbia River about 20 miles north of Portland.
So Scappose made the news because of a traffic accident that was filmed by a “dash-cam” pointing out the back of a pickup truck.
Is this a “dash” camera?
It is safe for viewing, although folks get injured, you won’t see that.

The driver of the pickup saw the errant auto approaching and moved to the side of the road. The head-on crash happens behind him.
The other interesting thing is that if the following auto – the one hit, not the hitee – had stayed in the lane or moved left into the passing lane the impact would have been avoided.

Next, I found the photo above on the Wikipedia site.
The picture has 2 cameras pointing forward with different zoom of the scene. But what is the 3rd thing on the lower left? 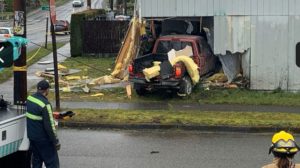 An unoccupied storage building and a pickup truck collide. There was no information on the driver or the reason. The truck needed assistance getting out while others were determining how to save the damaged building. 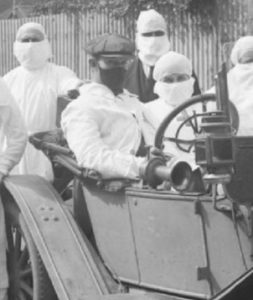 Or just stay home. Photo is from 1919 in New South Wales at the time of the “Spanish flu” – although Spain was not the source, many there called it the French Flu. Others say it started in Kansas. The major troop staging and hospital camp in Étaples in France was identified (1999) by British researchers as being at the center of the Spanish flu.

A lot of strange things are done in Ohio. 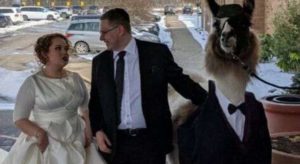 Bride, brother, and brother’s guest. The llama, Shocky, was not allowed inside the venue.
LINK 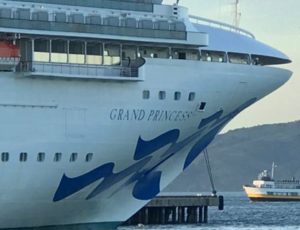 Officials are working to bring the guests and crew of the 951-foot Grand Princess to a non-commercial port. Sister-in-law Kit is on that ship and has made contact with sister Peggy in Ohio. We’ll call from the car while in town on Saturday.
Perhaps when Nancy is ready with her weekly summary on Sunday evening we will know a lot more.