Starting this morning at 8:15 having been up first at 5:15, again at 6:15, after a late night’s start to sleep. Have a nice sunny day, but need to get ready to go to a 1:30 p.m. meeting. The purpose: meeting with Jim Huckabay, writer and colleague (geographer) we have known since 1993, who is the author of a book about another colleague who was hired at CWU the same year as Nancy, 1988. [Jim has a small publishing business.]

John and I offered to proofread the draft manuscript of an 8-chapter book he has worked on for 4 years transcribing notes from audio interviews.

The story: A small girl opened the street side door of a car and jumped out. Our ex-colleague, in order to not slam into her on his bike, tipped the bike and slammed into the pavement. This about ripped his ear off, and he was warned about possible brain injury. Such did not appear right away, but stress a few years later caused him to start having seizures. He went from a distinguished teaching career, through a long and difficult time just coping, but now does so but in an extremely different persona.

The editor/publisher, Jim, doesn’t have a deadline for the book, and could be that there is never one. But we offered our thoughts and corrections.

From there we had to make a trip to the CO-OP for grain for our senior horses.

We were 4 hours away from home this afternoon with all our stops. We bought some groceries, and then went to the CO-OP to get Senior Equine grain and rolled corn. On home for John to feed the horses before dark.

I started playing catch-up on email that came today, with 3 folks reporting in their schedules for coming to the February meetings of the Fiddlers & Friends music group. Need a response from a lot more members to be able to plan for the number of chairs required for this Thursday (and hopefully for more dates through February).
Now my next challenge is to “advertise some off my giveaway items to the “freely given Facebook lists.”

My father died when I was only 14. He influenced so many wonderful traits in my life—particularly music, because he was a musician and also in those few years taught me how to fish, shoot skeet, throw a baseball & football, play Mumbley-peg & other knife-throwing games (probably not allowed these days), work on cars (back when you could), and many other talents. He was my traveling buddy. Also, I inherited his brown eyes. 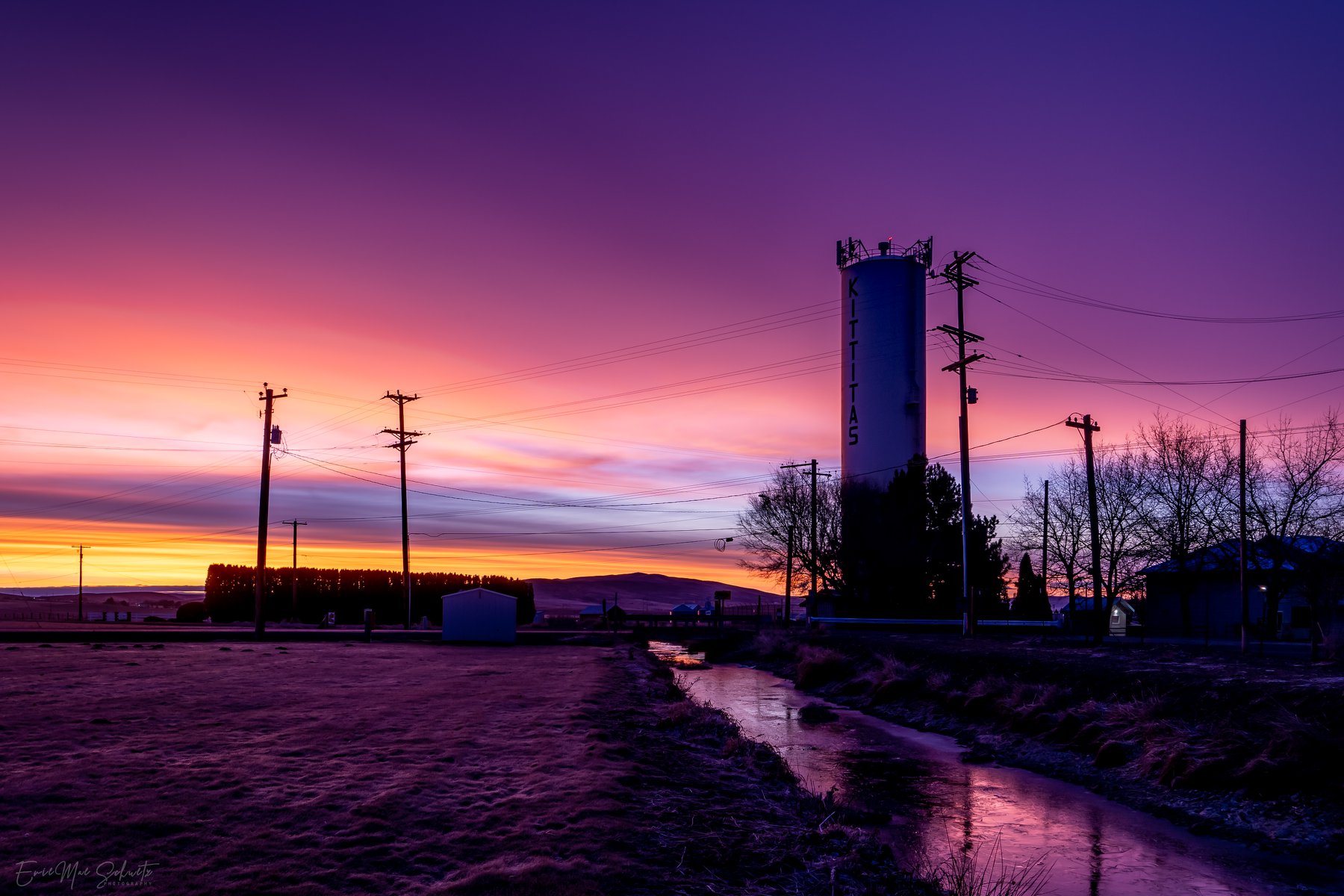 We live 10 miles NW of the town’s water tank; I awoke early enough to see the sunrise, but from our perspective the composition is only the bottom fire-like lower layer interrupted by tree branches and our hay barn top. Combining below with Sid Peterson’s morning sunrise.

I remade my appointment at KVH Imaging with Donna for Bone Density and for Mammogram, way out in March. We ate brunch here. Froze English Muffin bread from Super 1.

We left for town and Bi-Mart: check #s, get cat food, Fishermen’s Friends, & Artificial Tears. In town for 5 chores (one a blood draw at the hospital, routine every month for my blood thinner; that stop took more time than any other, because of a wait even to be checked in the hospital, after 8 folks), and then had to wait at the lab for 4-5 to go ahead of me. Other chores needing done just took a lot of driving around town and less time doing them. John was driving, and I went in a few places, such as Bi-Mart, (for my supplies & to check numbers), with John to pick up cat and dog food, and look for a step type stool to get to high cabinets in our washroom), to Fred Meyer for checking out meat on sale, buy John’s cola drinks and check their price on a step stool–$20 more than Bi-Mart and much worse in construction, by the Gym to have John climb two very steep flights of stairs to pick up scarves I’d loaned to a friend who had a scar on her neck she wanted to cover-up until it healed, and finally by the bread room to check for my favorite, from Super 1, English Muffin Bread (for my toast). We left late thinking we would be getting to the hospital lab at a good time, 1:30, but not so. We didn’t get home until 4:30.

Still snowing. Got several emails sent out. Getting to bed late, almost midnight.

Put meds in their little plastic tray – a once a week chore.
Took Acetaminophen, at 6:00 a.m., let animals out and went back to bed until 8:30 a.m. Set alarms.

Hopefully will get a call from Insurance company with vehicles. Came too late in the morning and they never called back.
Get ready to go with Red bag and nutrition drink to Food bank. Go to Food Bank Music, leaving at 10:50 a.m. Pack meds. Take containers to Lori.

9:30 a.m. appointment with Margie the Dentist for chipped front tooth. Unfortunately, the piece she adhered back on that came off, only stayed a couple of hours, and I lost it again while eating a blueberry pancake for brunch. 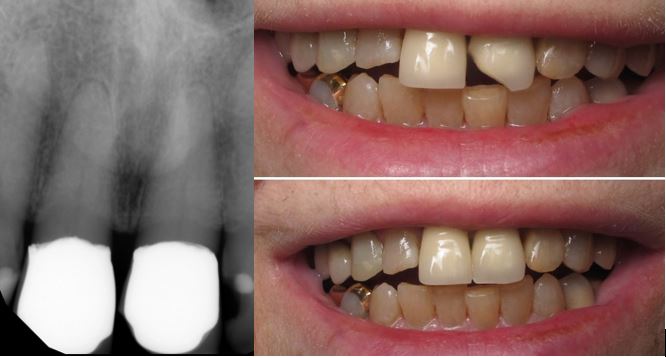 Chip fixed did not last much over an hour. Both teeth had crowns for 40 years (lost in a rafting rapids trip in Idaho) and both need replaced. We await the insurance company decision.

The dentist will not try again to replace the chip, but will wait until 3 weeks when the insurance report comes back about whether they will cover having both crowns replaced. X-rays and pictures of my teeth were taken and submitted. If the insurance covers ½ the cost, these two will be crowned (prepped and seated) within March. Dental insurance will pay $1,000 of the $2000 charge. I will pay the other $1000. The original teeth got crowns in 1978, after I was at the front of a WWII rubber landing craft on rapids on the last stretch of the Lower Salmon River, a tributary to the north-flowing Snake River, 50 miles south of Lewiston, Idaho. I hit a metal bar that was across the front.

I went to the Rehab for music leaving at 12:50. We had an excellent turnout. Kevin, Gerald, Charlie, Jeanne in her wheelchair, me, Dean, Amy, Sharon, Charlotte, Minerva, Reta (Jeanne’s sister), and Sandy.

On the way home, I dropped off about 6 empty egg cartons to Eva Frink’s house, with her daughter Shannon. Eva is in Orlando, with her son for him to attend a conference.

I had a call from the dentist right before 5:00 p.m. setting up my appointments in March.

Off to Geology lecture in a rainstorm. 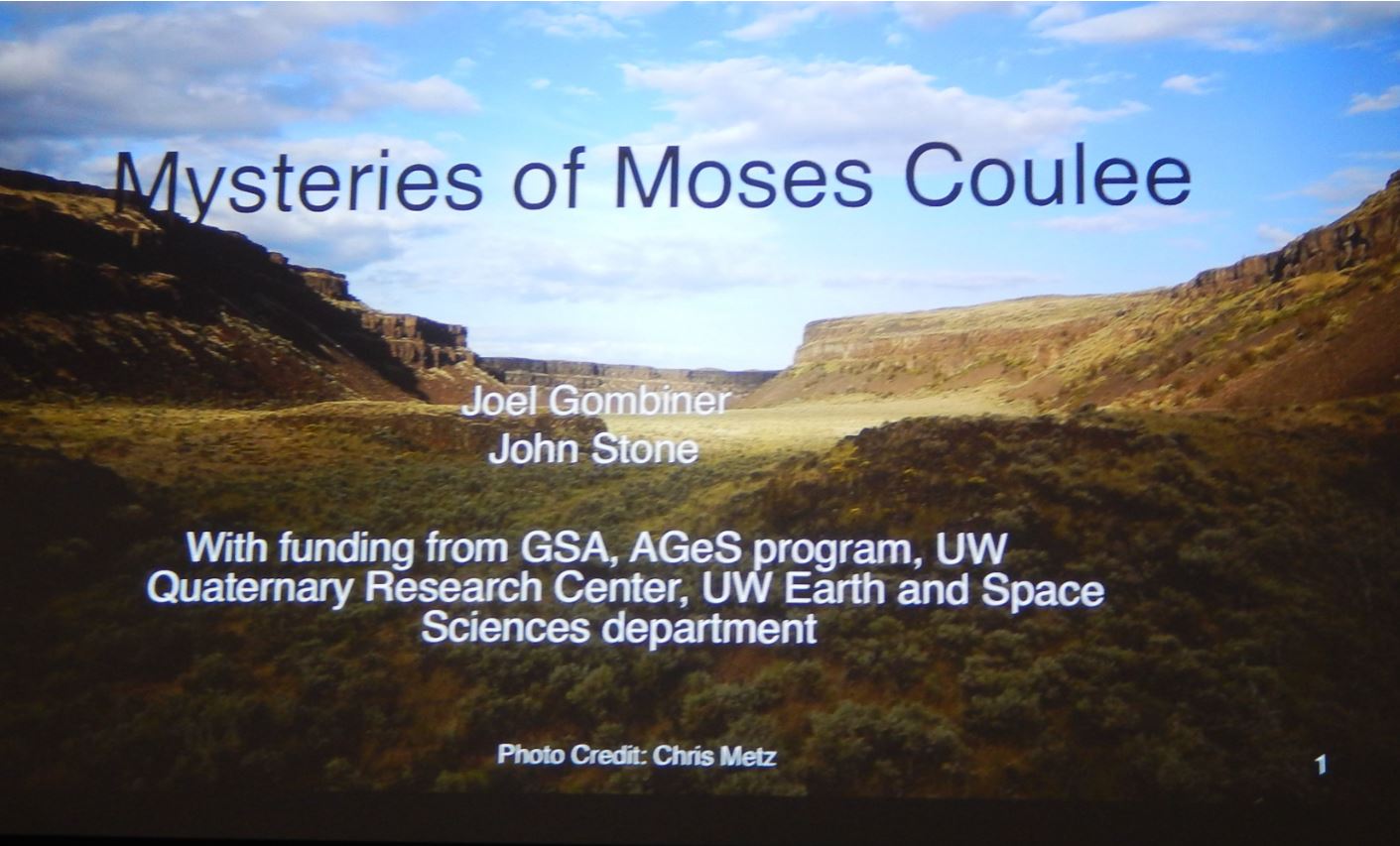 Joel is a graduate student at the UW, and this is his Ph.D. dissertation research:

Supper. Casserole with chicken breast filet pieces, in green beans with mushroom soup and white onion, with “crisp fried onions” baked on top, served with baked (heated) cubes of Honeycrisp apples as a side, with Cheez-it crackers.

Annie out at 11:35 to pee, Czar, and fed Sue out front. Rascal is in the chair behind John’s computer chair. I’m going to be ASAP, dead tired. 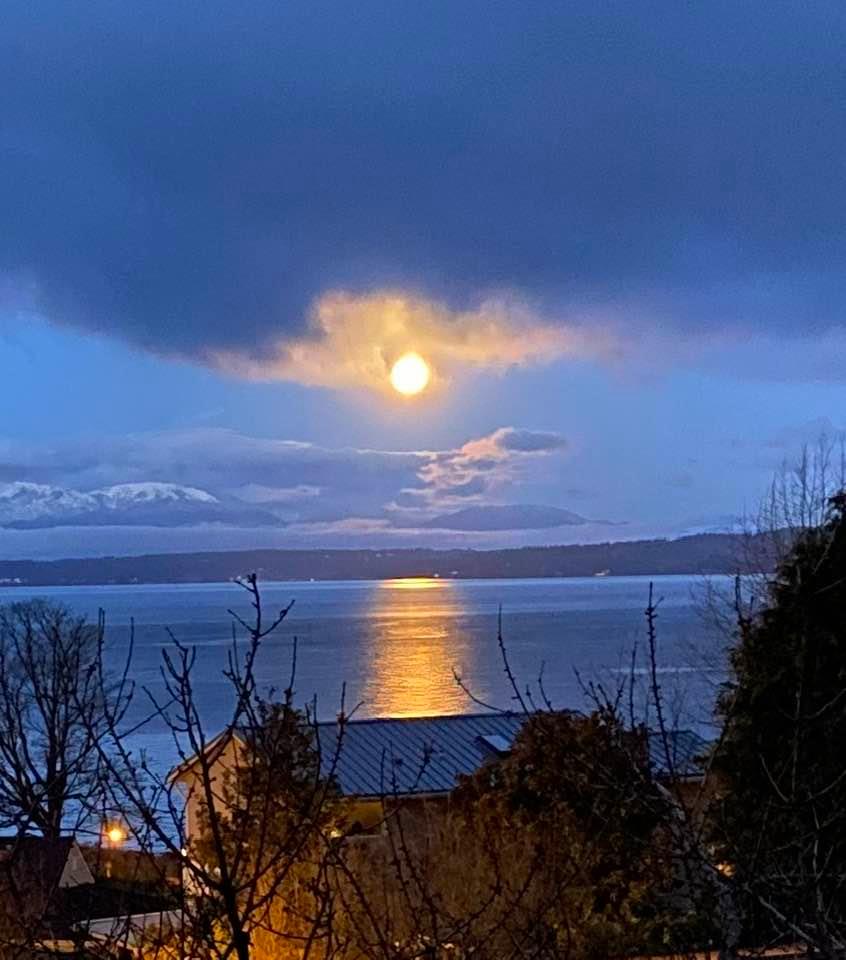 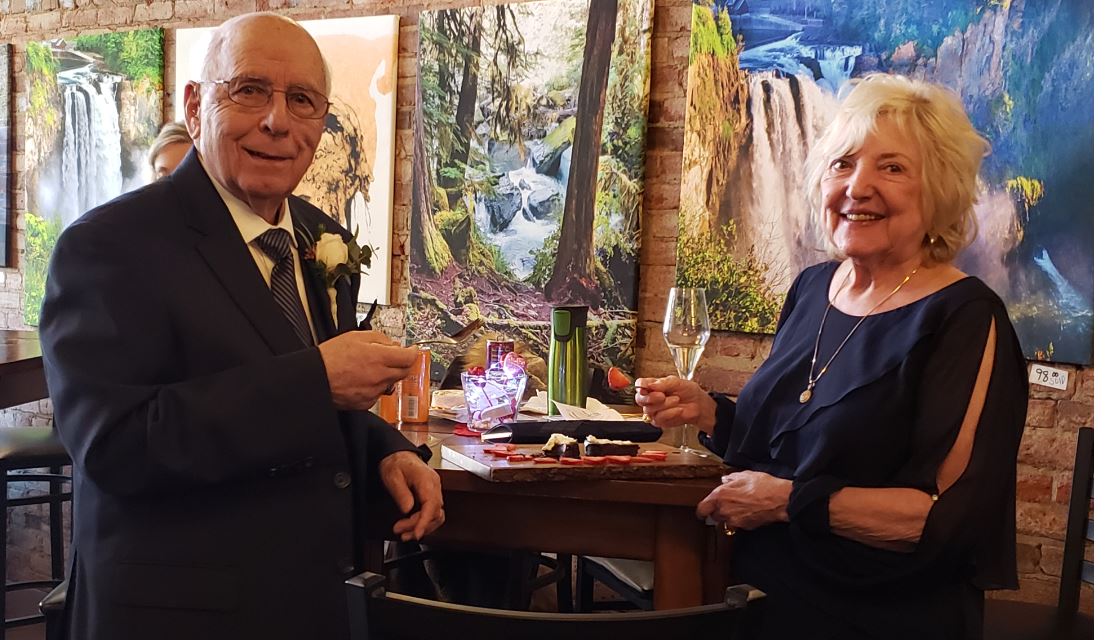 I went to Lou and Velma Fournier’s wedding, 11:00 a.m., St. Andrew’s Church, with a gift of wo bottles of White Heron wine from us and the Kittitas Valley Fiddlers & Friends group, with which he sings tenor.

They are an older couple, both of whom lost their spouses to death. They had a long Catholic wedding followed by a very nice reception downtown at Gard Vintners. Amazing amount of finger food: Boiled shrimp with cocktail sauce, veggies with dip, 3 meats (ham, roast beef, and turkey slices), 3 cheeses (cheddar, Swiss, maybe Havarti), sandwich wraps (I skipped), and a large piece of Costco wedding cake with pink roses on white frosting. Took 4 hours from my day. John stayed home to pack stuff from the garage. Some stuff definitely going to the landfill. Much still to be looked at, so off to the barn.

Loaded & ran dishwasher, and now have some counter space. Went to bed, late.

The first snow moon shot of this morning was by EvieMae Schuetz: 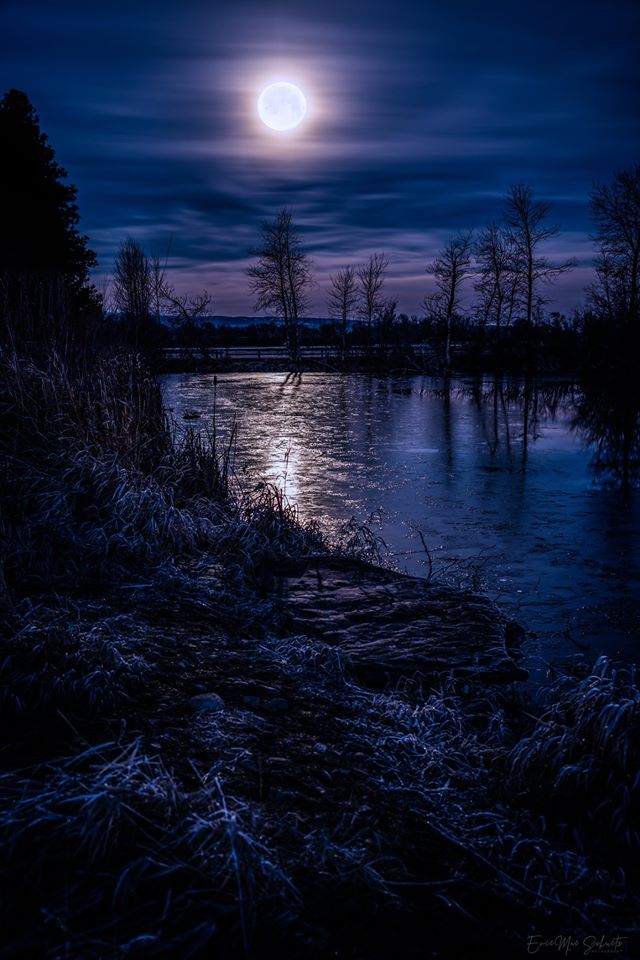 This above is taken at the Naneum Pond by Evie Schuetz.

This one by Evie Schuetz and this one by Peggy Coble.

John fixed baked/broiled pineapple with cinnamon & brown sugar to take to the Raclette.

We went and had a wonderful day. 7 hours away, so the blog has been delayed. John put out a delayed announcement.

Made it back by 5:30, and just in time before dark for John to get grain and hay to the horses.

Description on the video above stored on YouTube: This is a 24-minute glance at the conversations ensuing after we had enjoyed eating the food prepared and brought in by the pruners and their families. Along with wine, Phyllis & Cameron provided an authentic Raclette cheese round. Often these are squarish.

Some of the other videos are much shorter, but will be there later for your pleasure if you want to see the raclette (means scraping) at work (using a knife to put the melted cheese over potatoes or other). They are not in this week’s blog. We also had a number of side dishes to add to our plates. We consumed a lot of food. A typical pruner’s lunch was melted cheese over potatoes, using the wood just clipped from the vines.

Ours is an extravagant reenactment.

A few more photos will be in a link to come later, as well as a few short videos.
Here’s the sunset when we got home late this afternoon. We watched it in living pastels with nice views all the way home, but had my camera out of reach in the back of my car, and we were rushing home to feed horses before dark. 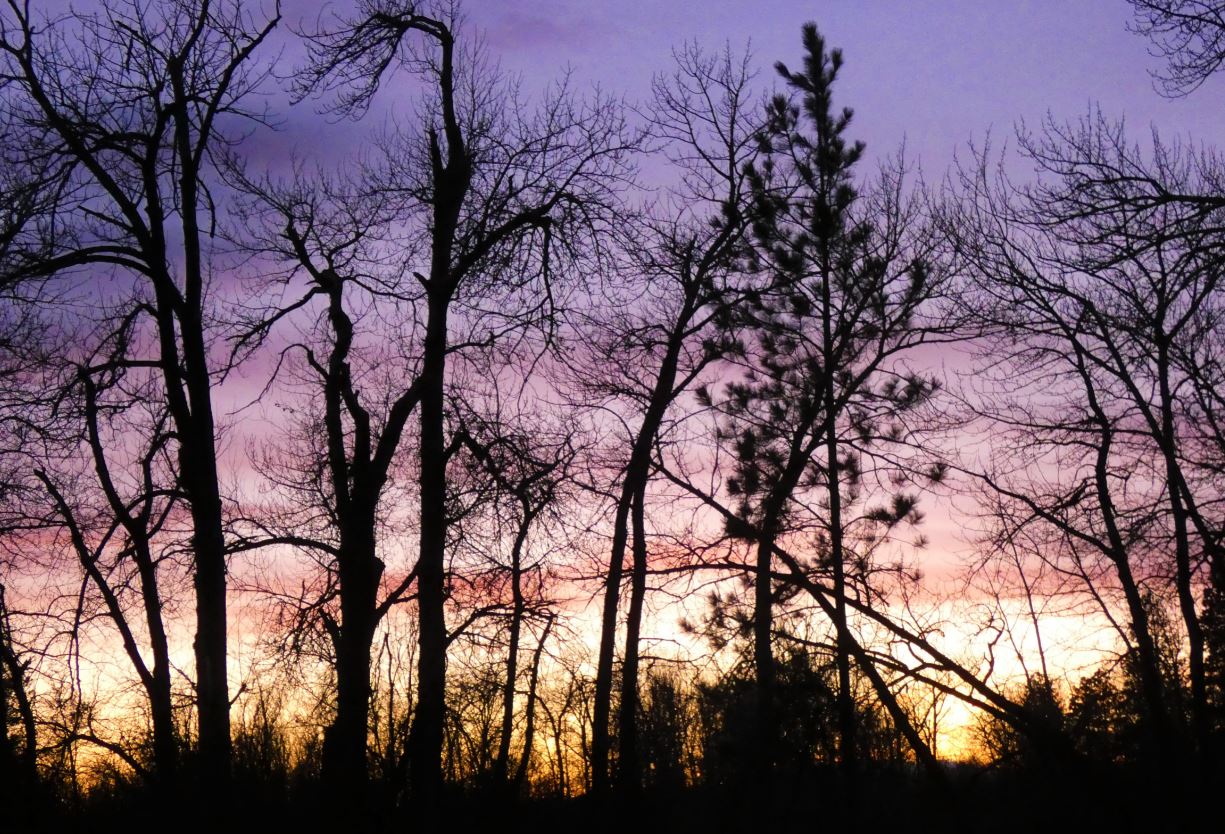 Pastels in tonight’s sunset from the Naneum Fan