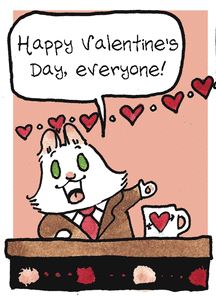 From Georgia Dunn’s Breaking Cat News and her crack team of feline reporters.
Lupin
Lupin is always ready to give you the scoop!

On Monday this week, I learned of this:

‘. . an object, device, or event that is used in a story, but insignificant, unimportant, or irrelevant in itself . .’

A fellow wrote about our President and used the name “Donald J. MacGuffin.” The author, Andy Kessler, then [for us less educated sorts] explained what he meant by MacGuffin.

President MacGuffin’s “… wild persona is a device that baits enemies and clears space for his agenda.” {Think of an outlandish ‘tweet’ that folks focus on for 24 hours, until the next one.}

Director and producer Alfred Hitchcock popularized the term MacGuffin and the technique with his 1935 film The 39 Steps, an early example of the concept Hitchcock explained the term MacGuffin in a 1939 lecture at Columbia University in New York City:
It might be a Scottish name, taken from a story about two men on a train. One man says, ‘What’s that package up there in the baggage rack?’ And the other answers, ‘Oh, that’s a MacGuffin’. The first one asks, ‘What’s a MacGuffin?’ ‘Well,’ the other man says, ‘it’s an apparatus for trapping lions in the Scottish Highlands.’ The first man says, ‘But there are no lions in the Scottish Highlands,’ and the other one answers, ‘Well then, that’s no MacGuffin!’ So you see that a MacGuffin is actually nothing at all.
In the film, the MacGuffin is a plan for a silent plane engine. 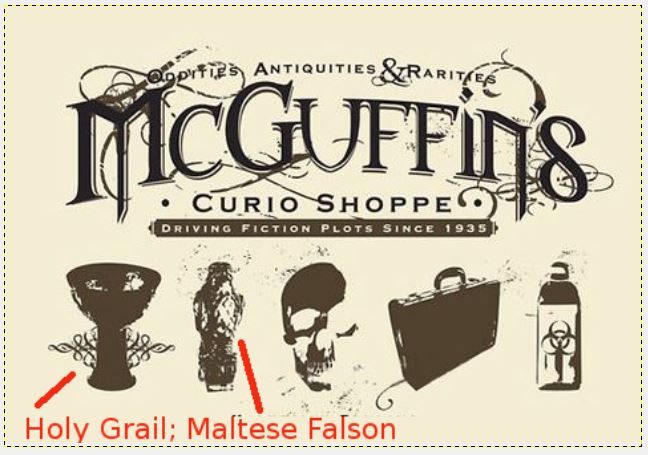 I wonder what I will learn during the rest of the week!

This is a slang term, also from the UK, that is only incidentally connected to flies. In the parts of the USA where we have lived dumping of garbage and household waste, where one should not, was usually referred to as illegal dumping, or some such.
The concept has been raised to a higher level in the UK, as suggested by the photo. 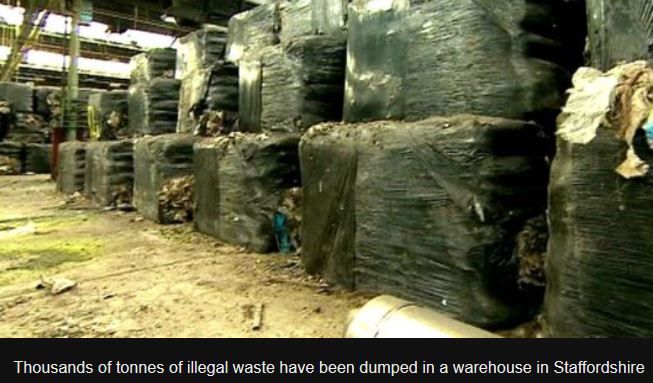 The short story is that someone will claim to be a waste-disposal company and briefly rent land (or not) or a large warehouse.
Waste is picked up for a fee, then taken and deposited
illegally {Link: on the fly }. The ‘tipping’ part is alternative usage for “dumping”.
Here’s my question: Why didn’t I think of this. I’d be rich.

Clean up involves glancing at boxes of things and deciding to paw through or toss the whole thing. Today I found a 1967 half-dollar with JFK’s head; … and the photo below 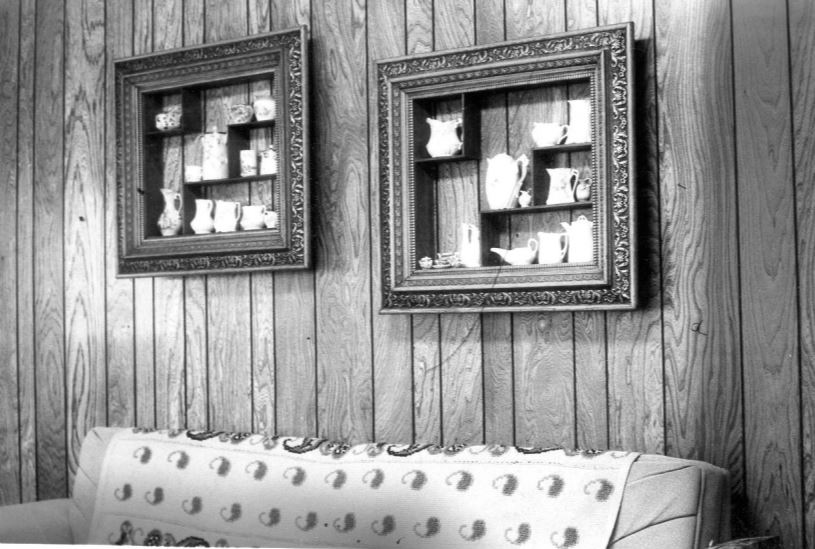 My sister will correct me if what I write is not true. My mother had a small collection of cream pitchers. I bought her a yellow one at the local 5 & 10 cent store. I seem to recall my brother Kenny coming up with the frames shown here. Dad cleaned them up and built the interior shelves. The wood and “gilt” frames made nice shadow-boxes on the paneled wall. A web search shows many but none quite like these fancy frames with simple interior.
I remember the walls of the house having wall paper with large flowers (?). I do not remember installation of the panels, and that may have happened after I went to Cincinnati in 1965. Mom died in 1980 and Dad moved to Florida in ’81.

I started at Clarion State College in 1961. Many of the universities of Pennsylvania started as teacher training places, known as “Normal” schools from the ancient Greeks – I think. We were required to take a lot of different classes, such as “audio-visual” – so we would know how to string 8mm film into a projector, and many other things no longer done.
I took an Art class, and the photo below shows the two sides of one of my projects. We learned to mix Plaster of Paris (a source of gypsum is near Paris FR) and then carve a figure, of sorts, from the hardened material. Both sides of my “sculpture” are shown below; 7 inches tall. The Pietà it is not.
If I was trying for something, I have forgotten. 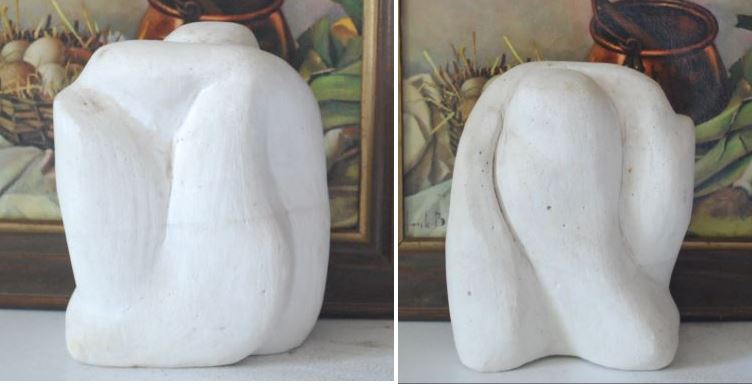 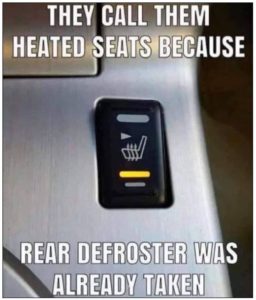 Nancy uses these “rear defrosters” while I prefer to start my car 5 minutes ahead, and have the whole insides warm when I’m ready to go.
My choice is not the most efficient, I guess, but I’m okay with the guilt.
On the rare occasion when Nancy drives the Crosstrek, I have to then reset the mirrors and turn off the seat heater. Bummer!