When it fell, the tree’s base that sat in a hole in the plaza appeared to shear off. City spokesman, Randy, said the tree will be a bit shorter when it is reinstalled, as crews will have to reshape the trunk to seat it. 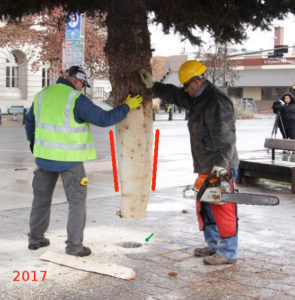 The plaza has square blocks for the surface. Chainsaw Mike’s right toe has one in front, and a second block away is a hole. With the tree held by a crane, they have shaped the butt of the tree to taper and fit the hole from removal of one paving stone. Note the slab from the tree behind Green Vest Joe.
The 2019 crew tried a different method.
The right side photo (above) shows the butt of the 2019 tree that snapped. The chainsaw grooves show they cut most of the wood away and left a square portion, apparently, of a size to fit in the hole made from removing a single stone.
The tree looks to be about 20 inches across (314 sq. in.) and they left an 8 inch by 8 inch prong to go in the hole. They left just 20%, and it is not centered in the butt.
They had tensioned cables (guy-wires) to keep it upright.
Because of Thanksgiving, with city workers at a minimum, the tree won’t be put back up until Monday, Dec. 2nd.
Then they can decorate it. A 2016 photo here: Yakima Plaza Christmas Tree shows the scene.

I’m tempted to go down Monday (45 miles) to see what they do; how they shape it. I’d remove 3 more stone pavers and make the hole 4 times larger. 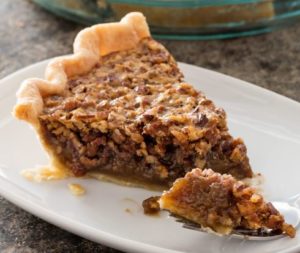 Thanksgiving is a time for cooking. So a tradition in my mother’s kitchen was Pecan pie. Today I learned that the thing is not a pie, at least not technically. It is a tart. I chopped a lot of pecans making something in the shape of a pie; we did not bake these with whole pecans.
Technically, a pie has a pastry top & bottom. Without the top, it is a tart. Single serving tarts are common but small size is not the defining

characteristic. The term tassie is used for the small ones. The lemon & raspberry ones look yummie.
However, a custard pie is not a pie either, it’s a flan. Those things thrown toward people’s faces, often called custard pies, are not. Those who throw them are called flâneurs; at least in Europe.
Who knew?
Back to pie. The name is, perhaps, from the bird Magpie. One historian of the language has suggested that the food was named after the bird because the varied ingredients reminded people of the birds’ habit of collecting together all sorts of bits and pieces in their nests. The first pies in Britain contained a mixture of meat and vegetables, and made folks think of the Magpie’s nest.
Our neighborhood thanksgiving dinner was last Saturday, and tonight we are out of both turkey and pie. About time.

I was reading a news item about Vietnamese people found dead in a lorry.
I did know what a lorry is, but wondered where that term originated.
Here is a site that doesn’t actually answer the question because no one really knows.
a bit mysterious

Now here is the good part. Near the end of the text an explanation is given for the word ‘truck’ in the sense of ” “to have no truck with,” and from there to why a small farm selling fruits & veggies is called a truck farm.
Information in the comments is even more interesting, explaining why a vehicle we call a pickup is so called.
“ Early model Fords in rural areas would often have their bodies removed behind the front seat and their owners would lay boards across the frame to create a flat surface. Some would even put rails on the sides. These modified vehicles would be used to move various things, to move truck, and were referred to as “pick-up trucks” (the hyphen was later dropped), and that was how the vehicles were named even after commercial versions were manufactured (if you can find automobiles ads from American advertising in the 1960s and 1970s, you should be able to find this term easily or for a more current example, a Google search for “pickup truck” will display recent truck ads). By the 1980s, the use of “truck” to refer to ‘trash’ had fallen out of common usage, and many younger people didn’t know the classic definition. The term “pick-up truck” was too long to stick in modern American vernacular, and the “pickup” part was dropped. Leaving “truck” as the name of the vehicles. ”

The truck = trash definition is in a 1955 Webster’s Dictionary that I have. In an older one, this might be more prominent.

For many years we have had others do the cooking of the turkey at Thanksgiving. This year and last it was smoked. The chef, Rick, bought a large outdoor BBQ smoker like the one shown.
The fuel goes in the small part on the right (under the grating), and that to be cooked goes in the larger (left) side. Heat and smoke enter and pass across the grill and exit via the stack on the left.

The single panel from the cartoon of “Breaking Cat News” gave me a chuckle. Rick’s method ends a tradition. See the full cartoon at the link:
Tradition