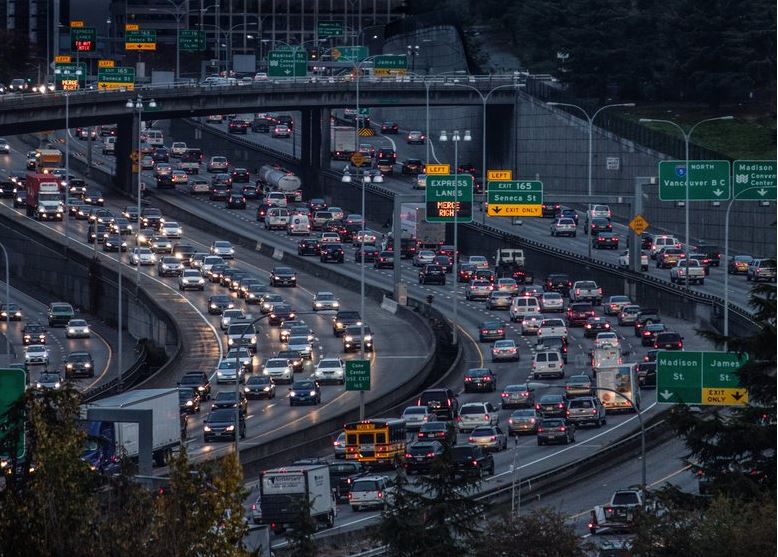 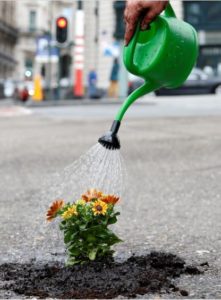 The top photo is of the 17th worst traffic choke point in the Nation . That’s what it was like last week when we went to the big city. On the Naneum Fan, our traffic jams involve herds of cattle or flocks of sheep, both rare.

The photo with the plant and green water can shows another urban phenomenon we have missed. A current story is from India where the problem of potholes has gotten so bad the residents starting filling holes so often that authorities became worried (putting people out of work, or what?), and ordered them to stop. Among others who have taken up the pothole cause across India is an artist in the tech capital of Bangalore.
Earlier this year, he created a video of someone dressed in an astronaut suit walking on a street so badly pocked and broken that it looked like the surface of the moon. Authorities fixed the street the next day.
Last year “Pothole Vigilantes” in New Orleans showed what can be done with beer, sliders and 700 pounds of quick-dry asphalt. Elsewhere, pothole activists have posted photos of toy boats and rubber ducks bobbing in water-filled potholes.
There is also a fellow in NYC that plants flowers and then makes and posts videos of drivers navigating around them.
Coby Persin hit a pothole

Ask not what your city can do for you, but get out there and be creative. Search ‘images’ with ‘city potholes’ for ideas. You are welcome!

Tim Eyman has been the leader against high cost car registrations.
On the right side, note the 2 stick-on tabs. The partial left one is for the month – January is 1 – while the many colored ones have the year. 2019 = black, 2018 = green; 2017 = red; stuck on top of that for prior years.

This is complicated. Voters in Washington State just voted, for a second or third time, to set a yearly car license fee to the cost of providing the “tab.” That has been calculated to be $30.
Some years ago the State tacked on “fees” – taxes – to auto registrations. WA politicians do not have the word taxes in their vocabulary. They quietly add fees to things.
In the 1980s registering a car would cost several hundred dollars. As new residents we were shocked at the price, but did not have a clue about it. Then in 1999, Tim Eyman (pictured above) detailed what those fees went toward. The initiative was passed by voters with 56% but declared unconstitutional – and so it has gone for years. Voters say “charge us only what it costs” and government comes back with a legal challenge regarding the constitutionality of the initiative.

The most recent fuss involved recently voted-in fees to help fund an extension of public transit, called Sound Transit 3, abbreviated as ST3. Only the auto owners in three counties [only King (Seattle) and Snohomish (north of Seattle) voted for this] would be charged the new fee.
It got interesting when the early renewals had to pay as much as 4 times more than they had the previous year. Why?
Authorities used a car-value-table that critics say is an over-inflated value for a vehicle rather than something closer to what the Kelley Blue Book thinks that vehicle is worth. This formula dates back to 1990 when legislators wanted more money so they quietly changed the way value was established – and the fee went up. Surprise! However, note that this was not a new tax.

I’ve called this method of funding larger government as “stealth taxes.” Such increases are not done in secret, but they are added in such a way that few folks realize it happens. Stealthy is the best description I can think of.
Others have provided descriptions more colorful. 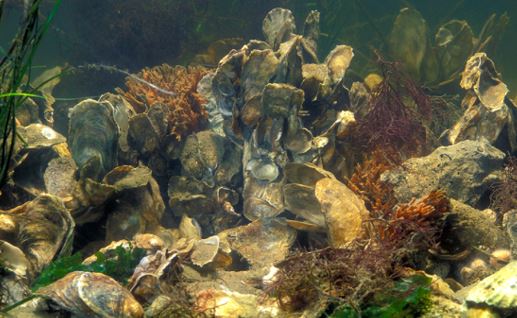 I have nothing against oysters as long as they stay where they belong, namely on a reef in a bay. I think this is dependent on how close you are to an ocean while you were growing up. At a meeting on Thursday evening, a fellow told me his brother had brought dozens of fresh oysters from the coast near where they lived growing up. He was thrilled. I told him I preferred Hickory nuts and Cottontails. Anyway . . .

This story is from Australia’s Port Phillip Bay, between Melbourne and Bass Strait and the Southern Ocean.
discarded shells make oyster reefs

They used dredges to harvest oysters and ruined the reefs. Now, by using shells from restaurants to rebuild starting places in appropriate bays, behold, life is returning.

The shells came from restaurants.
My question: Where did the restaurants get the critters?

Last Friday I had dental as Item #4. I had a double temporary crown procedure. That was on Wednesday morning.
It came loose on Saturday. Monday of this week it was “cemented” back on. I have no idea what the cement is. Terms such as adhesive and resin don’t help. How about Zinc-Oxide Eugenol (ZOE)?
Anyway, the permanent crowns (not linked to one another) are to be put in place on November 21st.
Just 12 more days.

Think of this: Here on the Naneum Fan we are 110 miles North of Ottawa, or 1,500 miles north of Miami. Hello Darkness.