{picture from web}
Here we are at “astronomical” winter in the Northern Hemisphere, and so we have a few winter items.

Item #1: Solstice
Our Sun’s energy strikes the surface of Earth head-on at only one point, but that’s just a mathematical thing.
In reality there is quite a large area where intense solar energy strikes the surface. Thankfully that area moves under those rays, both because Earth spins, like a top, and moves forward, like a race car on an oval track.
December Solstice on the Naneum Fan is today, Friday, December 21, at 2:23 pm. Unless you are in the PST Zone, your time will vary.
Our sunrise was at 7:45:28, and sunset at 4:16:09.
If you are on the Tropic of Capricorn – south Gracemere, Queensland, AU is there; 23°26′12.6″. Don’t wait. It (the T of C) is moving northward at the rate of 50 feet per year.
But back to that head-on one and only single point: Over the past couple of weeks, that point has been drifting south – slowly. Yesterday, today, and tomorrow it hardly moves at all.
The fine folks in Gracemere might get the idea that the Noon sun was at the same place above them for a couple of weeks. The Sun would appear to be standing still in the Noon sky. And that is the meaning of “solstice”, or “sunstede” (old English).
After today, the point will begin (slowly at first) to move back north. Daylight hours will increase for the next 6 months.

Item #2: What was he thinking 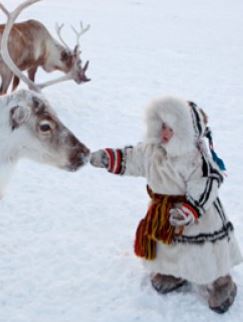 The photo is of a small child feeding a reindeer. The people of Siberia know cold.
A few places went down to -56°F this week.
Apparently the folks in Spain do not.
“… lost a glove in my sleep and just in five minutes my hand was frozen.”
When in Spain, stay in Spain

One of our geographer colleagues lives 25 miles west of us, closer to the higher slopes and forests of the Cascade Mountains. Winter has settled on the mountains and snow is accumulating.
Jennfer lives in the small town of Roslyn – setting of the fictional town of Cicely, Alaska, and the TV program Northern Exposure (1990-95).
Elk move off the higher elevations during this time of year. In exchange for covering much of their winter range with highways and urban development, the State of WA has feeding locations. Some elk go that-a-way. One herd goes its merry way to the south and east and the lower slopes of the nearby Columbia River.
Sometimes this trek of many miles requires direction. As you can see from Jen’s photo, this elk seems to need a “go left” or “go right” sign, because the one she is looking at doesn’t help much. 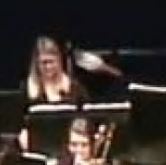 I may be the only person west of the Atlantic Ocean that had not seen this action.
When doing trail work, many folks wear rubber-faced gloves. They work well in gripping tools, say an axe, that might go flying if the handle gets wet.
Perhaps those playing in a band might want to consider wearing gloves.

Item #5: Don’t get hit with one of these 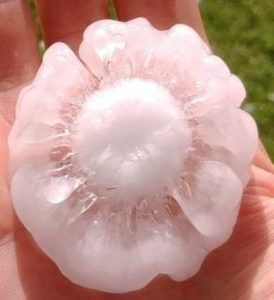 It’s summer in Sydney
Western Washington has just had strong winds and trees fell on houses, power lines came down, and the lights went out. What fun. It happens so much over there that unless it is your house and your lights, the rest of WA doesn’t pay much attention.

We saw some large hail while living in Iowa, and it did a lot of damage. It did not look like a cauliflower, however.