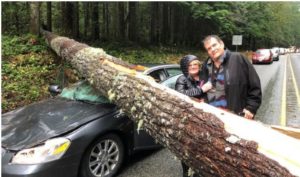 QUILCENE, WA, just west of Seattle, had rain and wind. This storm tapped into tropical moisture, bringing as much as 3-7 inches of rain to the Olympic Mountains and North Cascades. Usually trees fall on electric lines and/or houses.
Buick lost the battle With a gallery of 12 photos.
One image shows the tree broke and the upper part is near the back end of the car. Maybe the moving car carried the other section forward.
Taller trees are more susceptible to the “lever” action whereby the force of the wind at the top gets carried to the roots. Firs concentrate their foliage on the top of the tree sticking up and out above other trees, so catch the wind and act as even larger levers. They are shallow rooted.
Note the lack of branches in any of the photos. One shows where the roots (or lack of) came out of the ground. This tree appears to have a larger diameter trunk than its nearby mates, so likely did stick up above them – into the wind. 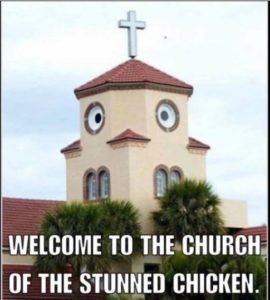 The photo of the church has nothing to do with this story.

How are your pipes?

Adelaide’s pipes, all 3,209 of them, were sent to England for repair of the leaking and groaning. Each pipe was washed, re-leathered and tuned individually by ear.
I hope I never have to be re-leathered.

Item #3: briefs & rabbits
Nancy was looking at an ad from a local store that had underwear on sale. Did we need any?
Just then a story from Hobart, Tasmania (TAS) was one of the headlines on my computer screen.

Hobart faces Antarctica across 1,700 miles of cold ocean. One has to traverse Storm Bay first, but it is often cool, rainy, and windy in the region.
The main prison in TAS is located near the small community of Risdon Vale. It has a good environment for rabbits but, apparently, not for underwear.
“Only two pairs … this appears inadequate and, as a minimum, standard clothing issue should be at least four pairs …” 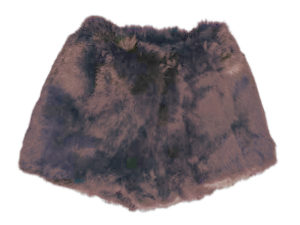 Also, there is this: “rabbits appear to be in plague proportions and are present in numbers sufficient to be noticed at all times of the day …”

An easy solution to these problems is shown here:
What’s not to like?

Item #4: And not a moment too soon

a ban of mandatory high heels
The changes will take effect Jan. 1, 2019; in the Province of Alberta.
This seems to be a big issue in the U.K. and Canada but don’t know that it has been in the USA.
When we were at the University of Idaho a new dean was hired. Likely he had never traveled west of Michigan, his then place of employment. During his early days at UI he wanted the folks in Mining, Geology, and Geography to wear dress shoes, instead of western (cowboy) boots.
That did not work well. After this was announced, folks that had not worn western boots began wearing them. A bunch of miscreants, we were.