Another full week with windy days

Video: David Green again at Stop 2
Fossils from long ago when this was like an African plain

I have a few others from my other camera to add when I get them processed, Angela Bennett took it down the hill when the battery went out on my one I had been using. For now, I’m stopping with the two on fossils, back at Stop 2. There is more fossil discussion to come later at Stop 4 with David Green, when I process those other videos.

And, as well, a good selection of stills from 3 cameras has to be organized by stop and uploaded. My computer crash has seriously altered the time for completing projects.

Sent music plans for count and attendance of KV F&F to two events this week. It’s going to be a wild week with summer traveling entering the picture.

I went in for my SAIL exercise class and worked the rest of the day on organization of my “new” computer.

I had my haircut at Celia’s around the long rural block at 12:30 p.m., but dance class was canceled with our teacher on a field trip class to Yellowstone National Park.

John went to town for his own blood draw, to check numbers at Bi-Mart, to Super 1, and to get gasoline in his truck for the weekend WTA trip. Unfortunately, the next day JR’s lowered their price to $3.25/gal. I filled mine up at the lower price.

I worked on transcribing videos and with reorganization on my Dell laptop. I spent a bunch of time tonight making space on this C drive and getting it ready to deliver Friday at 11:00 to Craig via Monica, so he can reinstate some software on my laptop, using my CWU affiliation. Originally, we were set up for tomorrow, but too much is happening on both our calendars.

Emerita meeting at Hearthstone, 9:00 to 10:30. We had a nice meeting with a good turnout, catching up on many stories of interest to everyone. Dee Eberhart (age 94 ?) was delivered by son Urban and picked up by daughter Cory. Both added to our discussions.

John and I drove separate cars. I had to leave for the Food Bank with music from Thursday’s group, because our regular leader was not available. First, however, from there I went by the hospital for a blood draw, for my INR. Then I went to SAIL exercise class, and on home.

John left for White Heron to bottle Roussanne, and carried along some of his candied Carpathian walnuts for the visiting afterwards. There is usually a bottle with crinkled label or otherwise something to be tasted.

I downloaded Adobe Acrobat reader software. My next major software replacement lost is the music preparation one I need for our use in providing music around Ellensburg. That is now been started, but it’s yet to be installed. I must have it ready before the month of July, when all our playlist offerings change.

Called in for music at Meadows: 11 people, with 9 chairs needed.

Last night I sent another request to Dell and Deepa in India about eliminating the charge. I had not heard back from the request 6 days ago. She responded today that they are processing my refund. Phew, what a nice relief. $129 loss would have been hard to take for nothing fixed. As it was, I only lost the 2 hours of frustration watching her try to fix the administrative rights on my account. I was no longer able to install and uninstall software, so the machine to be “fixed” had to totally be reset to what it was when new (including backup of all files).

John left at 5:30 a.m. for the WTA work party, Dorothy Lake (Stevens Pass road).
These images from the WTA trip arrived on Sunday, with John in them, and I’ll let him explain what we are seeing. 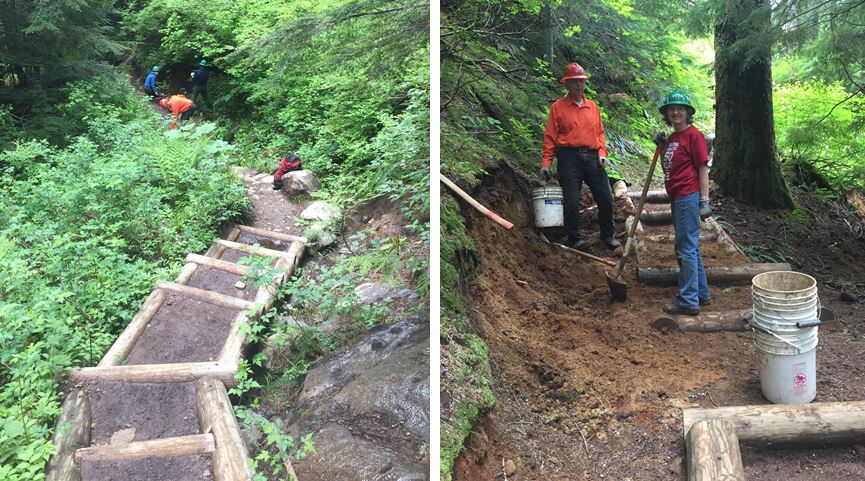 When built, log steps have a topping (tread) of sandy material mounded so water runs off. A decade later that topping is gone and rocks poke through, and the boxes fill with water when it rains. The drains along the edge begin to fill and sometimes a culvert underneath clogs. These photos show before, during, and after maintenance.

Above right, John and Cornelia take a quick break to smile for the camera. 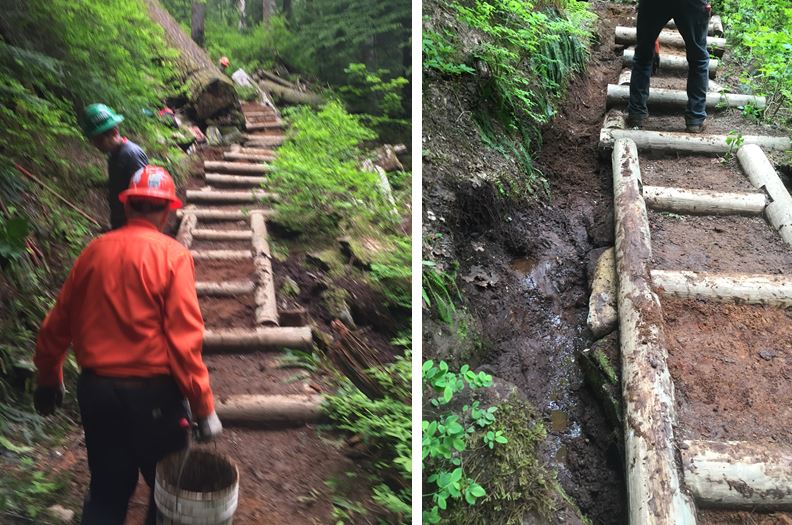 Above right, shows a cleaned out drain, mostly the work of the Green Hat named Drew, seen in the left photo. There were two other groups of 3 or 4 folks doing other things, but we are not showing those.

I dropped off the laptop with passwords to Craig, via Geography and Monica at 10:35 a.m., and Craig came over to meet me while I was still there. We exchanged comments about what he needed that I had written down and packed with the computer. I also packed my external drive in case he needed it for any reason and my power cord. It had a full battery and it usually lasts for 5-6 hours.

I went to the Adult Activity Center (AAC) for a Fathers’ Day Celebration lunch with antique cars & trucks from the 30s for viewing before and afterwards in the parking lot.

I filmed this after lunch.
Video: A trip around the 1934 REO Victoria Royale 1934. Read the description on the description of the video, which is co-owned by sisters, Victoria Perkis & Sharon Frazzini (wife of John D. Frazzini, who died in 2000). They were well known by members off the Ellensburg community, because of their business, Frazzini’s Pizza across the street from my initial office in Lind Hall on CWU campus.

Your grandfather’s cars- this one of a kind!

If you look at the link above, you will see my sweet memories this showing evoked of my dad’s ’35 Ford I grew up with and drove from 1959 until the 1970s.

Here’s that part of the description:
This was particularly nostalgic to me and in honor of Father’s Day because my father had a ’34 Chevrolet he restored for my grandmother, and he raised me driving a ’35 Ford, showing me all the mechanics of it, teaching me how to drive it, and I was only 14 when he died. It was fixed up for me by my father’s friend, and I drove it from when I was 16 (1959) till the 1970s when we drove it to Idaho. In 1966, John and I drove it from Cincinnati to Toronto, Canada to a Geography conference, and stayed with old friends of my parents. In 1969, we drove it on our honeymoon to Stone Mountain, GA, and we drove it to Iowa. My dad had replaced the original engine with a Mercury, it had a greyhound bus horn, a white-sided continental tire on the tear-dropped rear, with the trunk behind the backseat, which pulled forward. Its battery was under the driver’s side door, and he added turning lights and seat belts so we could drive legally.
I was an only child and we used to travel to south GA to the beach with my mom and to visit my grandmother and relatives in Savannah, GA and the old home place, Guyton, GA. My old car had over 400,000 miles on it. It had mechanical brakes that worked (Dad replaced them with Bender brakes). However, it was a challenge in the Pennsylvania hills, especially the “Emlenton Grade” (16 miles west of Clarion), when I drove it with John to meet his family. It had a heater my dad added and a stick shift on the floor. Sweet memories.

Here’s another short Video of the most unusual car, 1934 REO Victoria Royale with an Interview by Patti, Grandmother of Jessi Broderius (AmeriCorps staff AAC), talking with one of one of the car owners, Victoria Perkis.

Jessi’s grandmother asks about REO Victoria Royale, only 2 made in 1934

Here is a link to all 69 still photos I made at the AAC_Father’s Day Car Show (and lunch) today inside and outside at the senior center in Ellensburg, WA.

After picking up my computer laptop from school, it is working well again, so that I can use the software to create my part of the blog. The newest version 2016 gave me a steep learning curve from the old 2007 version I previously had for several years.

From there I went back home through Kittitas to visit the Kittitas Neighborhood Pantry to see if they had any jeans I could get (free clothing for the community & food bank) for taking to the work crew tomorrow that John is joining as Assistant Crew Leader. Last week someone showed up in shorts, which is not allowed for safety reasons. He would have been sent home, if there was none available extra in someone’s rig. After explaining the need and use, I received 6 pairs of different sizes for John to take to the crew leader LeeAnne. We learned the next day, that she had to loan out two pair because two people from the group showed up in shorts.

John left in our Ford truck at 6:15 for Dingford Creek WTA work party up a poor 8-mile gravel and channeled road to the trail site. He will carpool a couple of people in his high clearance 4WD vehicle. We were scheduled to only have 3 instruments and a voice at Briarwood music today, but my late night plea brought in 4 more to join us. I’m so grateful. We had a great audience and good time. Eight folks played – Gerald, Charlie, Nancy, Dean, Rita, Tim, Roberta, and Evie.

They fed us a nice meal after we played music. We had homemade Swiss meatballs and little link sausages in a BBQ sauce. 3 or 4 different salads, and several desserts, plus orange juice.

I met a fellow there who brought me some Jeans which I tried on, and took 3 pairs, two pants and the other a denim Bermuda shorts item. They belonged to his wife who has heart problems worse than mine – I was supposed to meet her in town at the AAC yesterday, but she was too tired to come.

We slept in and then John spent a bunch of time cutting a large Cottonwood tree that fell across our neighbor’s electric fence and allowed cattle to roam. He cut many pieces such that they can be moved out of the way, and the fence put back. The last cut was through the 40 inch trunk about 15 feet from the roots that has tipped out of the ground.

After some downtime, he took a flat tire off the Crosstrek and put on the temporary spare. The flat does have a piece of something metal through the tread, but all the tires (original equipment 35,000 miles ago) are likely to get replaced with something better.

I continued working on processing pictures and videos from the past week.

In the USA – time to celebrate summer 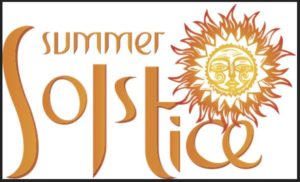