March 31st: This week’s not so nasty news.

30 miles north of Seattle, Machias area drivers have had to navigate through a tricky section of Storm Lake Road.
A new subdivision was expected to increase traffic, so the developer was required to expand the road width. With that done, sections of the double yellow lines were also repainted. Such lines are supposed to be in the center of county roads, but the painter had a different idea.
He or she zigged or zagged rather than producing a smooth transition, and put the new stripes off center.
On one side the lane was barely wide enough for a large pickup truck. The other side was wide enough for a tank. Still, the overall width is wider than before. All is well then. I think.
No, you are not hallucinating 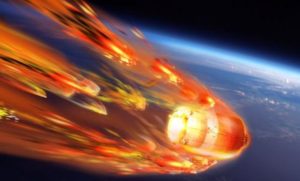 The good news is that at 47° North Latitude, we are/were not in danger of having space junk from Tiangong-1 fall on us. By the time you read this, someone, someplace may discover bad news from the sky.
Tiangong-1, a China space station, was launched in 2011, and, originally, a controlled reentry was planned. Firing the craft’s engines would have enabled controllers to allow the craft to burn up (mostly) over a large, unpopulated region of the South Pacific ocean. Any surviving pieces would have fallen into the ocean. But, in March 2016, something failed on the space station and ground teams lost control. This has led to the uncontrolled reentry … soon, or done.

I have about 300 baby Onions and 75 Strawberry plants to get in the ground. It is early morning, and I’m out of here – playing farmer.