The IRS sent a letter regarding the tax form they received in February, I think. It was for a previous year that they no longer accepted via digital form. So, I picked it up at the CPA’s office and carried it to the US Postal Service. Seven months and some days later they want it resubmitted with proper signatures. The digital submissions went through.
The new submittal can be done via “fax” (facsimile) that I don’t have but the CPA office maintains a unit. We sent them the form with my signature and copies of 3 documents regarding the deceased Nancy, including one that says I am the inheritor of her responsibilities. Expected turnabout is 9 weeks. We’ll see!

Last week I included a photo of firewood – some of which has to be split. There is more, not in that photo.
I asked a neighbor, Allen Aronica, if he had experience with electric wood splitter. NO, but. He has a gasoline one. He brought it over behind a 4-wheeler. Although a son and grandson had used it a couple of weeks ago, we could not get it started. I ordered a small electric one.
It was to arrive next week.
Last night about 10 pm, I got home from a birthday party, potluck, and game of pétanque, the game of boules. The log splitter was waiting in the shed. 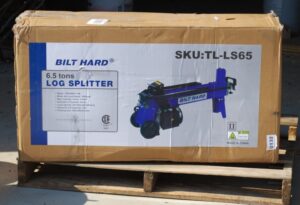 I’ll get to it later today. I cut Popular trees and started making rounds for firewood. The sap in them attracts bees, so I used cooler morning hours to cut the trunk and branches into proper length. I tossed those out of the cutting area and now the bees can do whatever it is they are doing. Then I dragged four more trees from the woodlot.

This week the little Douglas tree squirrel has been doing her/his own harvesting. The squirrels have two types of walnuts and two types of cones – Ponderosa Pine & White Spruce – to gather, eat, and store. Below are photos of the White Spruce, the squirrel, and the cache. 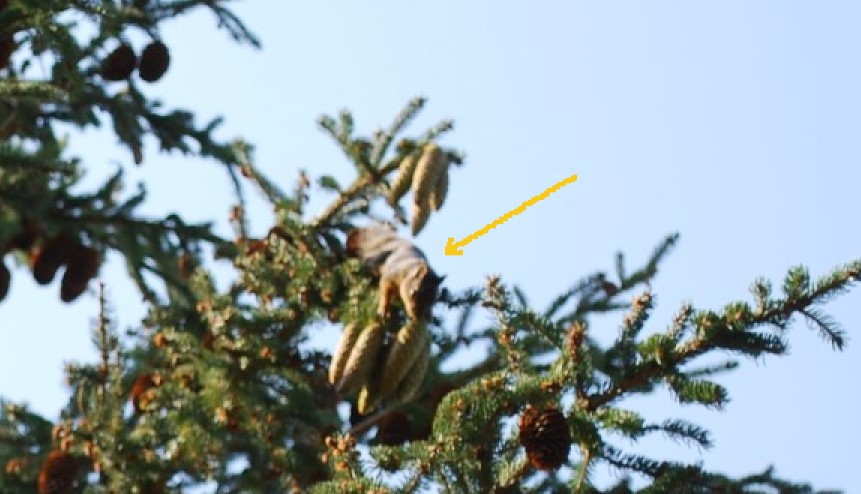 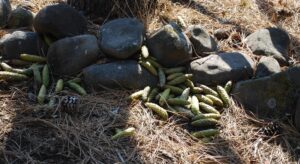 Today the squirrel was over the driveway and the cones were falling about 5 or 6 per minute. Yesterday, while working on the south side of the tree, the cones were falling on metal roof of a small lean-to. When the first couple of those hit I thought someone was firing a 22 pistol. I’m thinking of setting a small roof or something over the pile of cones. The squirrels don’t clean up all they cut, so instead of adding to the compost pile, I can add to the winter food supply. The Black Walnuts can go there to. I dislike the mess in the driveway when cars/trucks mash them into the gravel.

We had planned to bottle wine on Friday with a special lunch after to celebrate Phil’s 76 birthday. The bottling got canceled and the lunch morphed into a 5 o’clock potluck at another’s home a few miles away. Why? ’cause that home has a proper sized and surfaced boulodrome.
I went early and took a small bucket of onions to White Heron homestead. Phyllis made a baked onion, cheese, and egg pie. Cameron had a 9-liter bottle (Salmanazar) of red wine. There were skewers of beef and veggies, grilled sausage, and more.
Because of the 60-mile drive, I went light on the wine.

That’s all for this week.
Keeping track on the Naneum Fan
John