There was the annual August picnic of the local chapter of the Audubon society. I support the local group by going to the talks that sound interesting. Members here take the national organization’s stance on human caused climate change – extreme – I don’t support the actions.
At the time of the picnic it was 100°F at the airport. The city park had lots of trees, wet grass, and shade. It was bearable.
There was an over abundance of food. Probably only half was eaten. I took commercial frozen pies (Key Lime & Chocolate), thinking folks would appreciate the “cool” factor.
Not so. I brought most of it home. Likewise, with other desserts, such as brownies and an apple pie. Those went home with the bringers, too.
A thought: most of the members are age 65 or above, and perhaps are not much interested in sweet things. There were 6 or 8 types of salads.
Next year {!?!} I think I will just donate some $$ to the area food bank.

Another observation: I mentioned that almost everyone was over 65. Many are older, and some of the original members have died in the past five years. Some look like they are also about to check out. I questions whether or not these aging groups can rejuvenate themselves. I’ll bet not.

I’ve done some mowing and cleanup pasture work this week. Not much because of the heat. 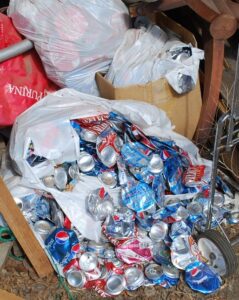 I have hundreds of old (20-year-old) soda and beer cans that we brought home from field trials – doing the clubs a favor. Originally I put many of these in the white plastic garbage sacks. Bad choice. They say biodegradable and compostable trash bags break down up to 1,000 times faster than regular garbage bags in the right environments. In practice they just fall apart sitting in a shed. Oops! I can clean up and re-bag some of these a few times a week – a big pain I try to avoid. Part of the problem is that a few years ago the cost of returning the cans was more than I was getting for them (8¢ pound). I didn’t bother. I think the price is now over 40¢/pound.

In the “Did You Know” department:
I stopped by the Sheriff’s Office to complete a form and be fingerprinted to get a permit for carrying a pistol.
The permit is for “concealed carry” because we don’t need a permit for “open carry.” The problem is that just by putting on a long coat or not tucking in a long shirt you can go from “open” to “concealed” without thinking about it.
The interesting thing was the finger printing. Ink is not used – they are scanned. That was problematic because I have very smooth skin where the ridges are supposed to be.
There are various reasons why this happens but in my case it seems to be a consequence of work with shovels, picks, rakes, and related tools used here at home and on trail building and repair. Who knew?
The standard wait time for the permit is 30 days. The cost was $50.25.
Randy, the greeter and technician, scrounged the office for the 25¢ because it was going to cost $2 to use a credit card. I told him I’d bring him a few quarters to help out the next unlucky soul that needs one.

That’s all the news that’s fit to print.
Keeping track on the Naneum Fan