The heliacal rising of a star occurs annually when it first becomes visible above the eastern horizon at dawn just before sunrise (thus becoming “the morning star”). Historically, the most important such rising is that of Sirius, which was an important feature of the Egyptian calendar and astronomical development. Sirius is prominent in the constellation Canis Major, (the Greater Dog). It became known as the precursor of the unpleasantly hot phase of the summer. Greek poets even recorded the belief that the return of the bright star was responsible for bringing heat, fever, and sudden thunderstorms. [Nancy named a puppy Sirius Sashay, and Shay became her favorite Brittany.]

On the left is the major stars of the constellation as they reside in the sky. With tilting and artistic interpretation, we get the view on the right.

The 24 hour period ending at 1 AM Thursday of this week is an example of dog day storms. 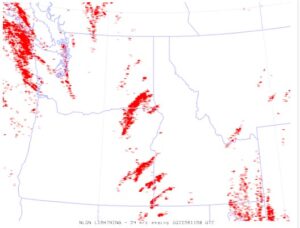 The red dots on the map are lightning spotted from satellites. There were clouds to my north and northwest but I neither heard not saw storm activity.
To my south, the sky was picturesque. 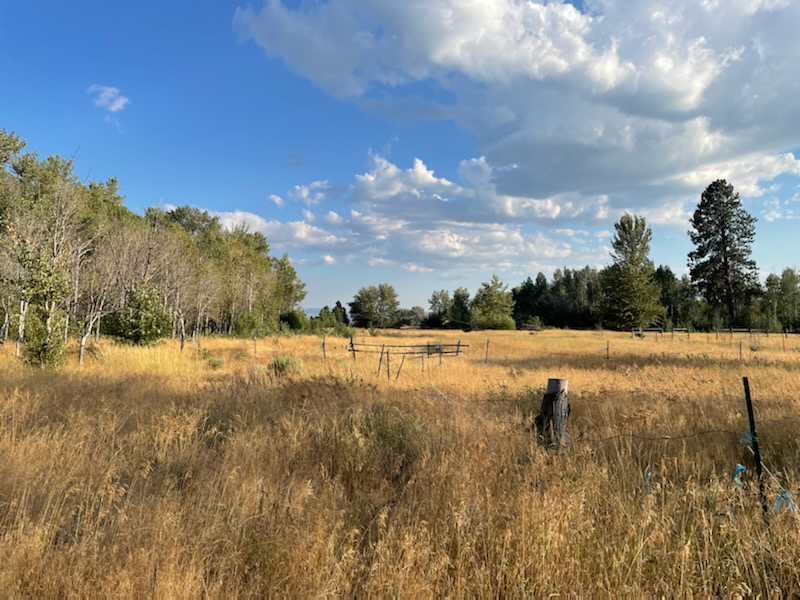 This view is from 150 yards east of the house. I was there looking for rocks, branches, twine, or anything else that might be in the way of mowing down through the grass and weeds.
Why?, you ask.
Way down, near the center, a tree along the irrigation ditch tipped over. I wanted to get it out of the way, and it was still rooted and green. After mowing a lane wide enough for the truck, and a turn-a-round at the tree, I was able to pull it – including roots – out of the way of the water.
This also brought the still green leaves down where the deer can get to them and the recycling of elements can begin. Further, the leaves won’t be drying, falling, and becoming additional fuel. Win- win, as they say. The work of converting it into firewood is yet to be done. I t won’t be ready until fall of 2023.
I left a gate open, and the doe led her two little ones through, around the house, and bedded down under the covered area near the (west) back door. That sliding patio door has a plastic flap for a doggy/cat entrance. So, I went out a different door and came around and carefully herded them back out the gate. They settled under the walnut trees on the east side. 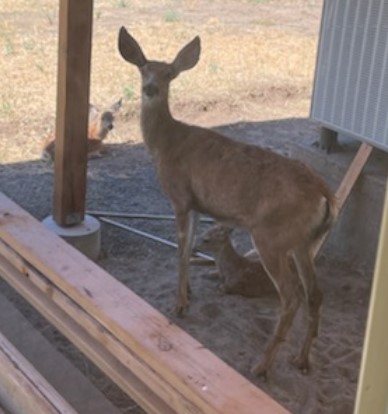 She was lying beside the one seen under her belly but popped up when I said “Oh shist!”

Just as an observation, in recent days I have sent six emails to folks that I very much want to contact. The responses are either slow, none, or partial.
Does “Dog Days of Summer” justify this?