Here is the best color on the Naneum Fan this last week of July.

Often called “Yellow slime mold”, but it is not a mold nor a fungus.
Named Fuligo septica.
Interesting Scandinavian folklore
https://en.wikipedia.org/wiki/Fuligo_septica

Mine is on the top surface of a butt of a cottonwood that was too hard to split. This does not fit with the habitat description usually given, but it looks like the second link photo from Mt. Rainier.
A sometimes name is “dog vomit”. A couple of days after the bright yellow look the stuff has coalesced into a smooth brown and yellow that does resemble dried vomit.

This image gives me a chuckle. I can’t find the original source. It appeared on an Ohio police site in 2019 and has been seen in a dozen other places since then. No offense to poodle lovers. 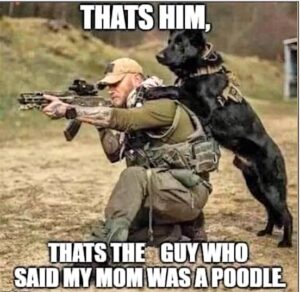 And writing of guns: I carried most of mine over to the winery. Phyllis fixed supper and we were joined by another couple, he a part time dealer in guns.
The plan is for him to sell those old ones and then I’ll buy a semi-auto pistol. The cash will be more than enough. The extra will be available to pay for the high-priced gasoline now being sold. Make and caliber not yet decided.

Today, Sunday, is the last of our “heat wave” – also called summer.
I’m 180 miles from the Pacific Ocean and have a mountain range in between. This makes for a hot and dry July and August.
The graphic here shows the daily highs in yellow and the lows in green.
Last year June was the hottest. The last 2 weeks of July, this year show almost an exact fit. We are expected to cool starting Monday and be down to 78° on Thursday. Beyond that, they are not sure. 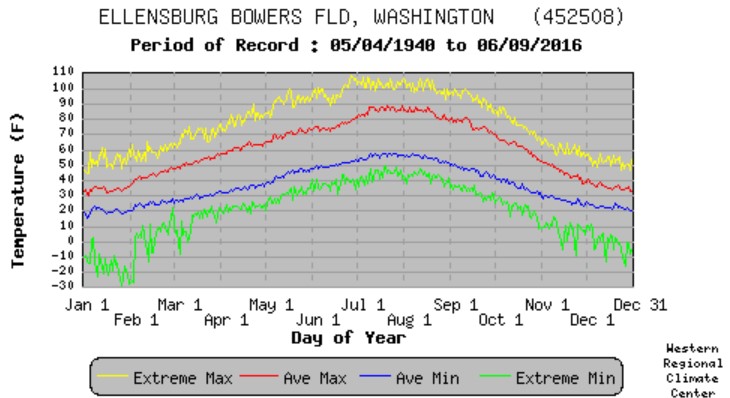 Other happenings.
The 1983 Fleetwood travel trailer is gone – to Megan and Kevin’s place. She is the CWU geographer and head of the scholarship committee. Their place is about 5 miles away. Kevin is a handy type and can fix the couple of injuries the outside has. Inside is 99% great.
Over at the vineyard, the well/pump is failing. A new well was drilled this week with a 10” diameter. It will take a few days to reconnect. Cameron has the small backhoe to dig the trench. That’s good. Meanwhile the vines haven’t gotten there full need of water, each block getting 3 hours rather than 4 hours. Still they look good.
About 9 miles down river is “The Gorge at George” – a major musical festival venue. The place was visible last evening with the stage and lights. Something called “Watershed Festival” was in progress with Sunday be “country” day. I recognize Miranda Lambert’s name and can put a face to the name, the others are not known or not as well known to me.
It is a nice setting and Cameron was the wine maker there for awhile.
Google Earth will take you there: Search for “Gorge Amphitheatre”

All for now
Keeping Track on the Naneum Fan
John H.