Knowing there would be a few unwanted blooms** on what I consider weeds, I took the camera and went for a walk.

**Copy and paste this link to see —
http://www.swcoloradowildflowers.com/Yellow%20Enlarged%20Photos/5trdu.jpg

Lupine (these are about done), Chicory (just starting), Showy Milkweed with the big-eared doe.
The “snow peas” [Oregon Sugar Pod] are ready to harvest. Onions had a tough time this year. About 10% started to bolt – prematurely sends up a flower stalk. This year the issue was cold weather. The plants sense the cold, anticipated fall and the need to reproduce. As the flower heads developed, I cut them off. I don’t need the flowers or the seeds. Another grower, Becky, in Washington also got starts from Dixiondale and, with many others, had the same problem. Here is what she says:

I’ll pull all the ones that bolted, chop them up, and freeze them in ½ pound packets for later use.
The doe, in front of the Milkweed was alone. There are several such and a couple of antlered ones around. Two babies, still with spots, are traveling together and another small one is around. They all bound away when they see me, unlike the older ones.

I used the truck to pull previously cut trees nearer to where I want to make firewood. When I started to put the chain on one of those, there in the dirt was a handset for the house phone. I cut those trees last fall and pulled them out of the initial resting place in March. When doing that the phone came out of my shirt pocket and has been there for about 4 months. The cracks in the glass are from a previous event. 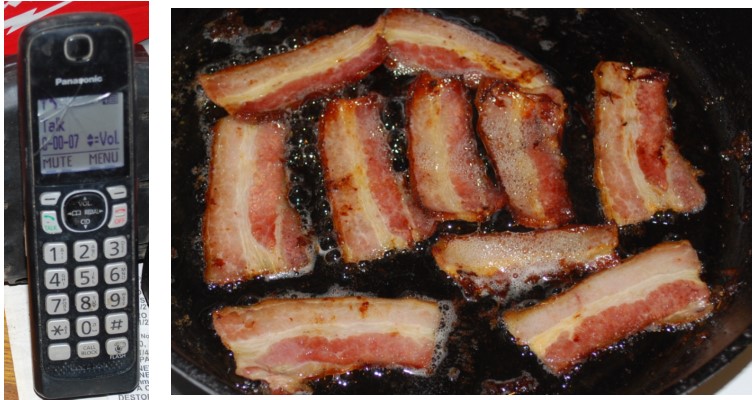 Kathy and Francisco came from Puyallup on Wednesday afternoon. We loaded the F350 (once mine) with recovered lumber from the remodeling of the big shed and 3 thick posts milled from the load of logs had. I had 2 sheets of corrugated sheeting – top and bottom protectors on a roofing delivery.
They brought several food gifts, including home grown bacon I had for breakfast today. Kathy has raised everything from bees to bacon, so this was a treat.
After the truck was loaded we went to EBRG and they bought supper at The Red Pickle, a relatively new eatery that began as a food truck. It is a nice place with good food and friendly staff.

This coming week is going to be our summer, but still about 20°F cooler than our experience last year.

With the clear night sky, I can get the core house temperature down to about 68° by morning. Likely, I won’t need to turn the AC on. The Weather Service folks think there is potential for a thunder storm Tuesday evening and that would change the temperatures. That thinking isn’t in the forecast as of Sunday Noon.