Nancy would have been 78 on September 1st. Spare her a fond moment.

Monday, shortly after Noon, I had a sneezing episode. I don’t recall doing anything that would have caused this, such as eating or inhaling something. It is dry and there is dust, and smoke occasionally, but I couldn’t make a connection.
Phyllis was planning to come Tuesday about 10:30 so in the interest of extreme caution – ’cause I might have the Δ covid virus – we changed the timing to Friday.
The sneezing went away after a few hours, but sniffles lasted until Tuesday afternoon. That’s it – end of story.
I stayed home, and Phyllis and Cameron came on Friday. I had pulled about 2 dozen boxes – packed many years ago – from the big shed. Phyllis opened those and called me to look at some of the stuff. For example, there were several sets of drinking glasses. A set from Atlanta had designs from there, such as Stone Mountain. The box indicated it was from our wedding day, but not that it was a wedding gift. No clue. There was a large old suitcase with drawings from a 3-to-5 year old Nancy. Phyllis offered to look through the collection to see if there was a Rembrandt or an authentic version of “The Scream” by Edvard Munch. Maybe a $5 bill. Cameron and I loaded things in his pickup — filing cabinets and furniture.

During the week I worked on rocks, dirt, wood-chopping, watering plants, and wood pallet disassembly (fire wood also). Many pallets came from CWU surplus – 65 or 70 at 50¢ each. Some are only good for kindling. Some composite ones are trash, but one bids on a “lot” and you have to take the entire stack.

Our local fire (Schneider Springs) produces smoke and slowly expands but not toward occupied land. The early part of the week was clear here. Friday and Saturday – smoke.

Unfortunately, for EBRG and the County this is Fair and Rodeo time with multiple outdoor entertainments, displays and booths. Scheduled activities end Monday night. Take down and clean up will be Tuesday. The smoke and haze are supposed to last the entire time.

Long time friends live in South Lake Tahoe, CA. A large fire started to their southwest and rapidly expanded. It was threatening the town but now appears to have passed by – with luck and lots of hard work by fire fighters with 523 fire engines, 84 water tenders, 27 helicopters, 62 hand crews and 95 dozers.
The image below shows the closeness to the town of the fire. 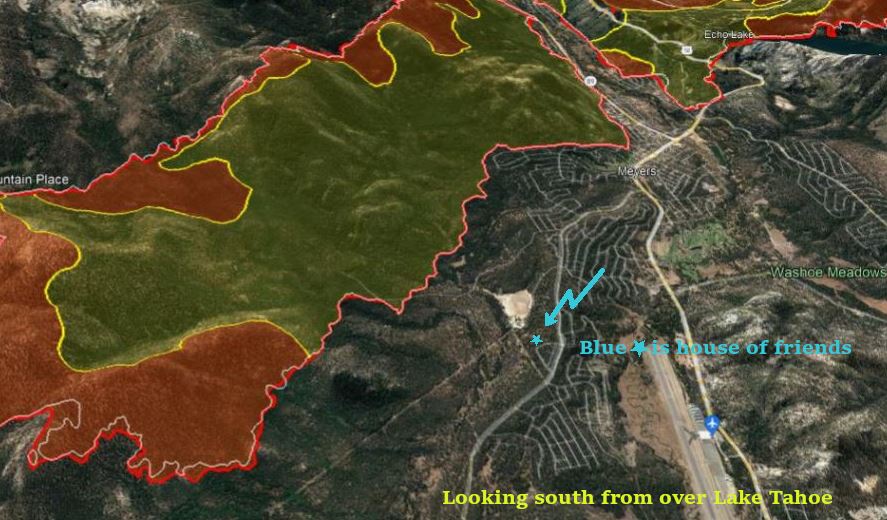 The Airport is on the lower right. The small white lines are residential streets. The green area has had the fire go through from right to left and is still hot. The brown area is very active burn and the bright red line on the lower left is active advance. Near the center of the image, the light brown (odd shape) blob is the landfill (aka dump). From the small blue star to the fire perimeter is about 0.8 miles. Several bulldozer lines were carved along the hillside. One is just a quarter-mile [440 yards] south of the house of friends. They have been gone for a week. Yikes. Home soon, I hope.