I did find out something about credit cards.
I was trying to respond to a Chase credit card notice, but did not see a card with that name. Finally found them.

The card(s) [one in Nancy’s wallet, one in mine] were hiding in plain sight.
The card is, in fact, the Amazon Prime card with that name and VISA (big white letters) on the front. The Chase name is on the back. I discovered this Thursday, but still wanted to do an on-line access of the account. 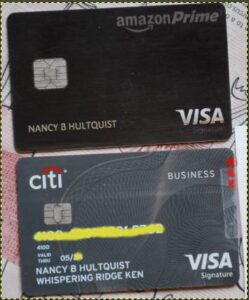 I didn’t know what user name Nancy used nor the password; although she had a note on her computer, it was no longer valid. I tried to do things on-line by trying to type into the form, but that didn’t work – because I was using the number keypad and it was inactive because I had hit the “num lock” key, turning off numbers and turning on other functions {up, down, side-wise, etc.}.That revelation came just as I had gotten to a person and was explaining my problem.
Having solved that issue, but also having explained about Nancy and why I was trying to access the account – – I was transferred to another person who promptly canceled the account. I was not the “owner” of the account; I was just a tag-along on Nancy’s. The support tech was able to confirm Nancy’s death from some data base, maybe SS.
However, there is (or was) an auto-pay from our bank to that account scheduled for next week. Oops! The pay date is extended 60 days upon the owner’s death, or some such thing.
The local Chase branch is in the Fred Meyer (Kroger) store so I can go down there and give them a check.
I was directed to a Chase web page where I signed up for my very own Amazon card. That seems to provided immediate use on Amazon’s site and a credit limit of $5,000. A hard card is to arrive in 10 days, or so.

Other stuff:
Early in the week I bruised my left heel. Having much to do, it was not a fun week. Seems to be a bit better now.

Saturday morning, Walter the contractor arrived with the “french door” for the south side of the house. He brought the main posts and beams a week ago. A trench is dug, for a critter barrier and post support wall. Concrete pour to come next week – I think.

I’ve got 97% of the work done on a long anticipated sign for the entry near the county road. Blue letters on a rough cut plank. Photo next week when it is complete. It says