Sunrise on the Naneum Fan 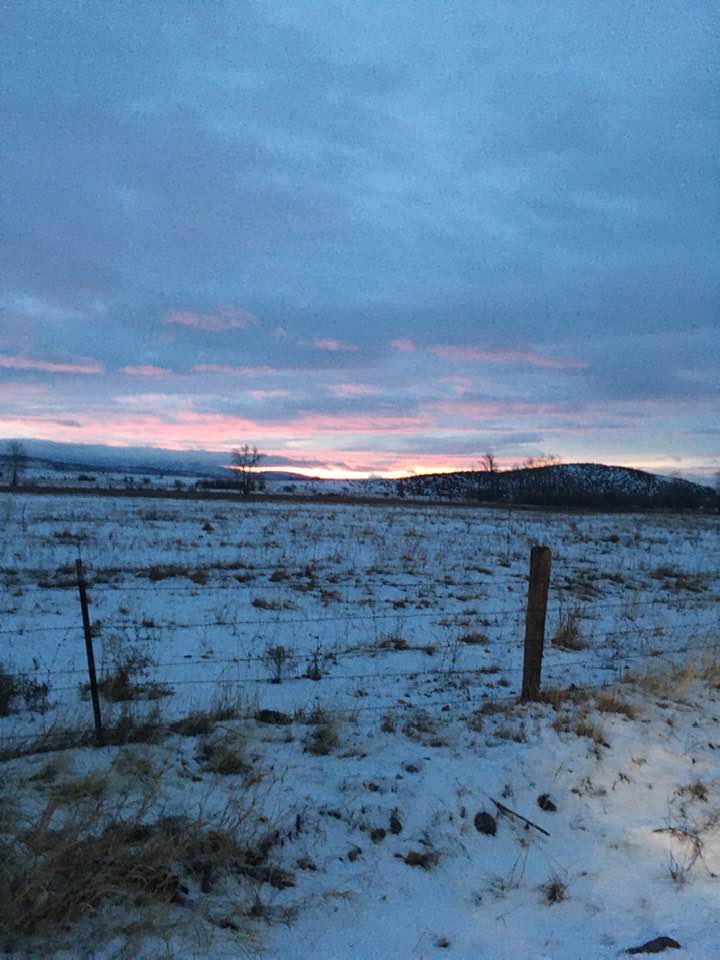 Thank you to all senders of various forms of birthday cards to John for his birthday, including phone calls.

Thank you, Gerri & Allen Aronica for their nice gift of a Claxton, Georgia Fruitcake; I’m sure more of a Christmas gift than a birthday gift, but it was so close, John double-dipped. I’m a born and raised Georgia Girl. The bakery is 30 miles from my Grandparents farm, but I grew up in Atlanta and, with my dad, eating fruit cake, and learning about all the geography of the places from where the ingredients traveled to the factory to make it to the cake.

Almost like going in John’s home state of PA to the Hershey PA Candy Factory, where I loved to do the same things with my Economic Geography students. Boy, has that changed since I was younger (and John is the same age), and we could WALK above the tubs of chocolate, right down by the side of the stirring tank, and see the chocolate kisses coming out in front of you all wrapped up in foil. No such views now. You are guided in cars or walking through Disney like characters, occasionally way above completely enclosed windows, and it looks now like no fun at all.

Video of the Hershey Chocolate Factory Plant the largest change of all my memories (probably 50 years).

It’s quite similar to the Sunnyside cheese tour of their packing factory. A person once was able to walk beside those up close.

And with the Cheddar Cheese factory in Tillamook Cheddar Cheese Factory in Oregon. No longer a walk through as once was, and we did that together in 1970.
Time moves on. More memories: 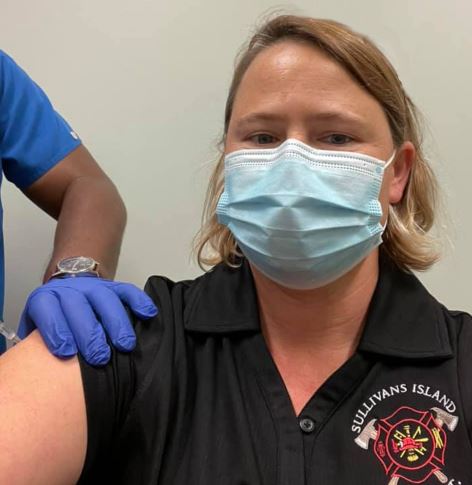 The photo is of Mandy Hawver Hydrick, who is getting a COVID vaccine as a first responder (fire & rescue): Assistant Chief Amanda

This reminds me of my summers there riding bikes around the Island with her mom (my cousin), Cindy Wilkins, climbing on the rocks at Fort Moultrie, and walking the beach.

Town day: Pickup my meds, Atorvastatin, at Bi-Mart pharmacy. Go from there by Super 1 to pick up LASIX at the drive-up window. Exciting!

Trip to Cle Elum for 3:00 PM visit with Chelsea (PCP) regarding swelling in my lower legs and decision on change in meds to reduce by using drugs rather than foods. My food intake has not changed at all, so it has other components and she is involving my cardiologist. Seeking an appointment with him ASAP, in Yakima, WA.

Lunch: John came home with Super 1 fried chicken we warmed and had with peaches.

Supper: Two entrees: Oven-warmed fried chick thighs & legs, plate; and a Bowl of Beef Stew John made with ground beef in the sauce, grated cheddar cheese, and I had Cheez*its spread around the edge of the bowl.

We missed getting food for the family in EBRG both days last week. So back to the Kittitas Pantry where I fell 2 weeks ago.

On the road I called my aunt Marise Wilkins, in Guyton GA. It’s her 90TH year Birthday today. Her hubby, now deceased, was my mom’s youngest brother. Henry was the family’s representative that “gave me away” at our 1969 wedding.

At the Pantry, John walked through with me as the staff and I chose things for the family we are shopping for.

We get stuff too – a single layer chocolate cake for John’s birthday. Through the year when we grow onions, we donate them. When Bi*Mart Kitty Dry Pellets go on sale, we always donate one a 16-# bag. We make other donations as well from around our house.

A couple of kids like the little boxes of raisins as shown on the left.

They seemed to have lots, so when I was asked if he should put some in (we are not allowed to touch anything), I said “All you want to give them.” He gave us an entire box – – but it had 24 pounds in plastic bags – – as we found when we started repackaging things prior to the first stop. Likely, we won’t need to get any for awhile.

Seems odd that this small town “Pantry” has more food than they can give away, while we hear of shortages elsewhere in other states.

One of the director there with her husband, is a doctor, at the Kittitas Valley Hospital, had just gotten her shot of Covid vaccine. We visited about the distribution of these, and are glad to know the local medical folks are being served. The County got just under 1,000 doses a week ago.

When we got home, there was a stack of stone siding under the new car port, plus some other things Contractor Walter had dropped off. So, soon we’ll be back to the remodeling.

Nancy’s awake every morning at 5:00 a.m. to take medication, regardless. Takes care of other things (putting out dog in yard), before returning to sleeping). John is up & about earlier because of going to bed much earlier in the evening. I went back to sleep and slept in very late this morning until at 10:00 a.m. from needing to sleep in after late night hours and with badly interrupted sleep. I’m unaware of when John was up first, but I know he was taking care of animals, inside & outside the house. I guess I’m alert to the comings and goings, but I don’t really wake.

I called “Hay Guy” Mario and he’s bringing 4 tons on Monday. If he can get 2 trips in, double that. I’m driving myself to EBRG for my Echocardiogram at the hospital imaging department. It will take 2 hours! So good I can leave John home to handle the hay.

We both slept in until 8:30 a.m. John’s been for the mail that comes after dark. I still haven’t gotten the compression socks Chelsea wants me to wear. I talked with Janee’ at Bi-Mart but sizing is an unresolved issue.

Brunch: Bacon, Pancake, with strawberries atop, under Maple syrup.

John started his afternoon moving firewood stacked in a small shed just off the back concrete slab. A couple of holes need to be dug and a sack of concrete mixed and used as a footer. There needs to be space for the posts that will support beams of the much expanded patio roof. The back space will be snow and rain free – about 28 feet wide and 14 feet out from the door. Holes will be dug Monday, by Nate.