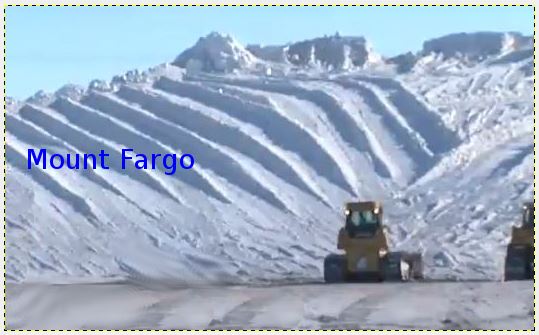 There are odd conventions in newsrooms. “Hed” stands for “headline,” “dek” stands for “deck,” “lede” stands for “lead,” and “graf” stands for “graph” (as in paragraph). The Wall Street Journal has a “headline story” at the bottom of the front page with lines separating it from the rest – those lines sometimes look like a blockey “A”. There is always a money angle about it.
This from the local-color article (the A-hed) in today’s Wall Street Journal:
“FARGO, N.D.—The tallest hill in this flat town is a mountain of snow.
Mount Fargo, as locals call it, covers 10 acres and rises to more than 80 feet. So far, it holds around 40,000 dump-truck loads of snow.
It is still growing, even though Fargo hasn’t had a snowfall for nearly three weeks. City crews have been working nearly round the clock to clear 5-foot-high piles of plowed snow that clog the streets and make it hard for drivers to see around corners. They add hundreds of truckloads a day to the pile.
Fargo gets only about half as much snow as some places known for their snowfall, like Buffalo, N.Y., at the edge of Lake Erie. The real problem in Fargo isn’t the snow that falls here but the snow that blows in off the prairie. ”

From the Dickinson Press – – – There’s a video.

We’ve had rain. Western Washington has flooding of low areas next to the many streams. Modern building codes would not allow people to build where they did 100 years, or even 50, years ago.

Many of the boxes in our garage came from two moves at CWU of Nancy’s office. The 3rd event was when Nancy went to the ICU and then retired. Items from my packing and moving her office stuff is in a big shed. Over several years, things accumulate. There are newspaper articles, memos with only a short term usefulness (or none at all), class related papers, books, conference reports, and on and on.
Mostly, we did not throw things out, we packed and brought it all home. I’ve found boxes dated 1979 and labeled “sort soon” or some such directive. Further, Nancy and her Aunt Mary packed Nancy’s mother’s Atlanta belongs years ago. That material (clothes, photos, kitchen things, and furniture) is with us – in the boxes shipped from Atlanta. I found a dog food company’s “puppy packets”, each with 2 cups of puppy food we were to give to buyers of our little Brittanys. Dated 1992. It smelled a bit rancid.
Just for effect: this is not ours:

I’m finding things I did not know we had, for example multiple boxes of canning jars. We did can a few things years ago, but switched to freezing. I’m guessing many of these came from garage/farm sales back in Iowa. We left Iowa in 1974 for Idaho.

Iowa has been in the news this week. We know where it is located but not everyone seems to, as shown here from German television: 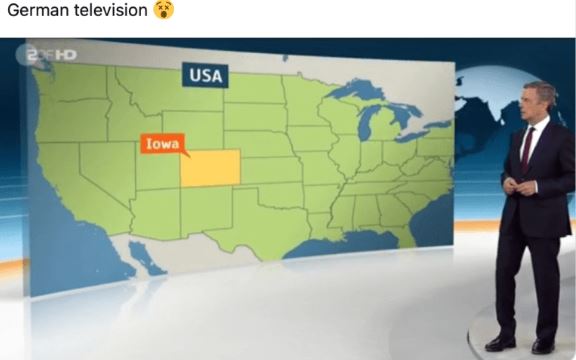