Along the inner wall of an abandoned snowshed

When the Great Northern Railway chose a logo it included the outline of a Mountain Goat. The train became “The Iron Goat.”

Today, WTA volunteers worked on a trail called “Iron Goat” just west of Stevens Pass. This trail is designed and partially funded under the Americans with Disabilities Act (ADA) and is of gentle grade, wide, and partly paved. There were some culverts to be cleaned, but mostly the folks cut a lot of vegetation and moved it out of sight. This involved much bending, stooping, and stretching. We all were ready to go home at 3 o’clock. Then I had a 2 hour drive.

This old book Iron Goat Railroad guidebook
(hardest to read) has a map, from which I’ve clipped part and made notations in red. 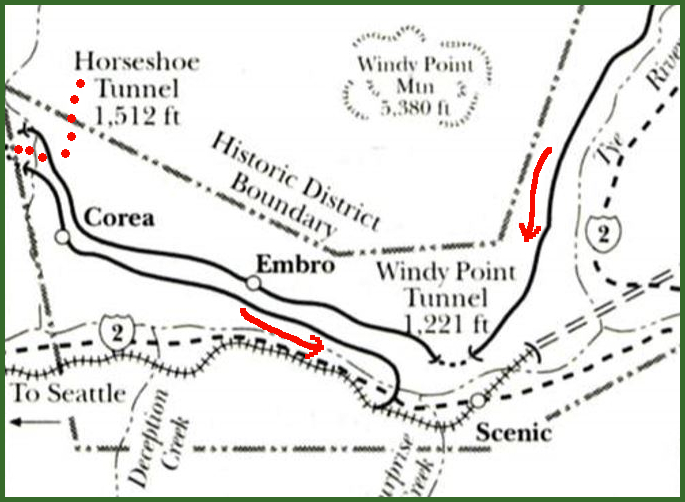 The mountain’s low pass in this area is over 4,000 feet. The eastern slopes are more gentle, so laying tracks up was easier than coming down the western, more rugged side.
The red arrow on the right shows the route down, toward Windy Point, where the route turns and stays nearly level until the very left side of the map. There the tracks crossed a valley on a trestle, entered a tunnel that U-turned inside the hill, and came out at a lower elevation (another trestle) – now heading back east (2nd red arrow). Another U-turn brought the route still lower, and turned west again, heading toward Puget Sound and sea level.
These two links go to more modern sites with color photos, but have much less history. Link 1, Link 2.

Our “mostly brushing” work was along the old route in the vicinity of the lower red arrow, and eventually along one of the snow shed inner walls.

Will the total be 11 million, fewer, more? Help. 2008 had the 11M.
the Big Butterfly Count
The painted lady butterfly commonly flies to the UK during the summer months, but every 10 years millions arrive in a mass migration. Good. But how do you count them? How do you get a total?

From Monmartre, Saskatchewan
If you use Google Street View and this location
[ 50.2208, -103.4482 ]
. . . You can see a replica of the Eiffel Tower in its setting.
For our high school prom, the ladies chose a theme related to Paris, and wanted a replica of the Eiffel Tower. Apparently I was the only kid (of 15) that knew the difference between a two-by-four and a hammer. Or maybe I had the lowest IQ. Anyway, I built a small (12 feet high or so) Eiffel Tower in the school gymnasium. I don’t have a photo, but being a semi-pro photographer, I sure my father took photos.
I came across this story: “5 roadside attractions to check out in Saskatchewan” – Link . This article will also answer the burning question, What is a bunnock?, and what is the Game of Bones.
You will want to look this up.

Our forecast is to near 90 degrees on Sunday through Tuesday, and then 10 degrees cooler.
This will be cooler than much of the USA, but still hotter than we like it. Make a shopping trip as soon as possible.
Stay cool, and well.