March 21, 2019 looking at West Bar from the Mariposa Vineyard.
Two green dots, right at bottom, are near posts for wires; no vines shown. Orange dot on left is where the BNSF Railroad crosses over the highway between Quincy and Wenatchee. Red dots = road in cut. Beneath the string of yellow dots is the Columbia River, almost a mile away and 500 feet below the camera. The basalt cliffs are 1,000 feet high. The snow between the River and the cliff may be 20 or 30 feet deep, in (link) Giant Ripples 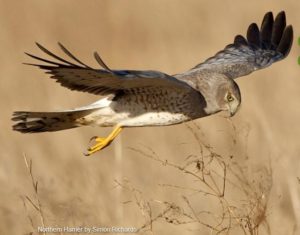 While pruning vines, we see several types of things flying in or near our airspace. One of the pruners has an obsession with airplanes, so every aircraft low enough to be identified is explained to the others of us that don’t know.
Meanwhile, we see many birds, some welcome – some not – in the vineyard. We are on a south facing hillside, now sunny and warm. We have seen Harriers and Hawks, and the owner saw an Owl yesterday. Others did identify a large bird cruising (with set wings) over the edge of the planted rows.
Northern Harrier

This next link is a story of how such birds of prey are used to keep an upscale resort free of pigeons and their droppings.
Terranea Resort and a falconer’s playground

Police come to the rescue when Ryan calls 911 to report a lost teddy bear.
Officer Khari was trained to deal with a young boy with autism so all ended well.

But where had the teddy bear, Freddy, gone? They don’t say. Mystery. 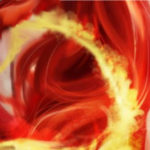 Irony of Fate – The concept that the Gods are toying with humans for amusement by using irony.

So I am not sure ‘irony’ is the correct word for a person advocating freedom of choice regarding vaccinations.
Massimiliano Fedriga, a leading anti-vaccination legislation figure and member of Italy’s far-right Northern League party has been admitted to hospital to be treated for chickenpox.
It is known this disease is often more severe in adults than in children, but having searched, I cannot find out why.

This is a story of a missing auto, just east of Vancouver, B.C.
Wrong Way Bentley