I had a problem with Word Press tonight. So, copy and paste as necessary.

Item #1: A Dolphin with no name 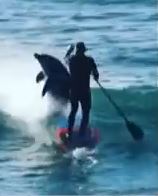 Item #2: A bicycle with a name 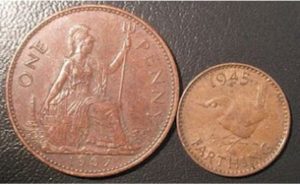 Most people have never seen a bicycle called a “Penny Farthing” and fewer still have ridden one. The farthing was a British coin, one quarter of a penny. “Farthing” comes from an Old English word for a fourth part. This machine had a big wheel that one peddled directly, and a smaller one following behind. When a bike with a roller-chain mounted on 2 different sized sprockets was invented, the Penny Farthing became nearly extinct.

This story explains that this strange bike is still with us, and apparently fun to ride.
Along the Murray River – Australia

This story is about habitat loss in a part of the Murray River drainage.
About 100 miles north of Melbourne, Victoria, two rivers meet near Shepparton. The Broken River Flows from the east, into the Goulburn, and together the water flows north to the Murray River. This was a mining area when folks cared more for gold than they 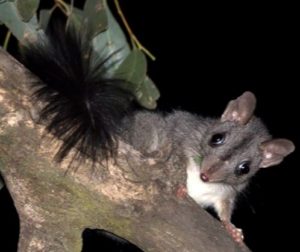 did for animals and trees.

Because of the loss of big old trees – think food, shelter, and nesting sites – animals have been in need of a friend.
Cue Janice Mentiplay-Smith and the Goulburn Broken Catchment Management Authority.

Copy and paste the following into your address box
www.abc.net.au/news/2018-05-04/nest-boxes-provide-hope-for-tiny-vulnerable-animals/9713854

Toward the end of the text is this:
“A young girl in grade five making a nest box was saying, ‘I don’t think that I can do this because I’ve never used a drill before.’”

When WTA crews do trail work, we often encounter people, some not so young, that have never used tools. We do on occasion use an old style brace & bit, or, when not in Wilderness, a gasoline powered drill. We have demonstrations and safety rules, but we do try to get anyone that has no experience to give things a try.
So cheers! – – to the young power-drill queen.

But they get one thing wrong.

The outside cats will follow me when I go to feed the horses, go up the driveway for the mail, and do other chores. Woody, so named because she is well camouflaged, seems to care most about where I am. Sometimes I don’t realize she is with me until she moves, or I make a point of looking for her. We often joke that she is my familiar.

In this story from Canada, a Ruffed Grouse seems to have become a “familiar” to a fellow from Red Rock, Ontario – a small place just north of Lake Superior.

Copy and paste the following into your address box
www.cbc.ca/news/canada/thunder-bay/ruffed-grouse-red-rock-1.4646253

The article claims “the males thump on their chests with their wings …”
Geeze! That would knock all the feathers off. The Cornell Lab of Ornithology, HERE, provides an explanation and a video.
Scroll down to: OTHER SOUNDS

A Navy chopper crew rescued a pilot from a snow field after the plane crashed in the Olympic Mountains:
LINK

Officials reported that a search and rescue team from Naval Air Station Whidbey Island hoisted the pilot of a Cessna 172 N from the side of Klahhane Ridge in the Olympic Mountains. This ridge runs east/west and faces north toward the Strait of Juan de Fuca.
A death was not reported, so I’m going with a good rescue.
I can’t find any more information. After the initial report, there is a blank where news ought to be. Go figure.