This group is mostly Gold Finches. Earlier, those with a raspberry color were in the majority. They seem to share the Black Oil Sunflower seeds. We chase larger birds, except Quail.
20 minutes later a dozen Dark-eyed Juncos showed up.
Other outside news: I opened the garden gate where established Strawberries grow. These are supposed to be mowed and cleaned after harvest. I let the deer do this. After a few days I close them out again and let the plants start to grow. 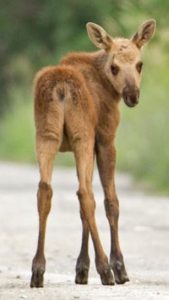 If you have a good Picture Dictionary and look up the word “attitude”, you will find a photo of a Moose.

At the link below, when you click to start the video, a short ad runs – just a few seconds – then the actual video will play. It is just over 2 minutes.
A person in a vehicle would like to get by the animal and seems to expect a Moose will get the hint and leave the road.
The driver should have known better. Moose have their own idea about how the world works.
(The Moose in the video is a littler older than the one here.)

Don’t mess with a Moose 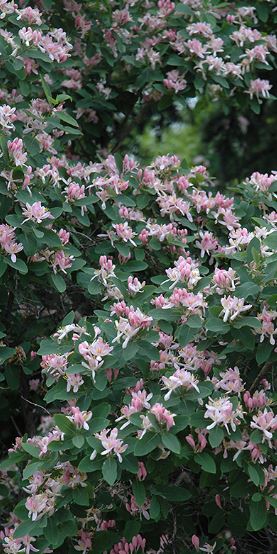 This seems a happy story, although likely illegal:
A Great Cormorant took refuge under a honeysuckle shrub outside a home near Conception Bay, Newfoundland. That’s the part of Canada that hangs out into the North Atlantic Ocean.
The owners brought it inside, thawed some fish, and after a good meal and a cozy night in a warm house, the bird headed out the next day in, seemingly, fine shape.
Cormorant Dinner and a Room

Cornell Lab of Ornithology {may be a slow loading site} LINK

I always wonder where the names for plants come from, and go to this site for information: Latin and Greek Meanings

For the common honeysuckle in Newfoundland Michael Charters tells us: Lonicera tatarica comes from:
Lonic’era: named for Adam Lonitzer (1528-1586), a German herbalist;
and …
tatarica means a native to Siberia — refers to the Tatars