Buying stuff on the web usually gets you a cardboard box. With a large shed, I just tape these boxes shut and store them. Waste not, want not. However, most folks don’t have that option, so what to do?
To diminish the glut of the things, there is help, namely the cardboard box cat 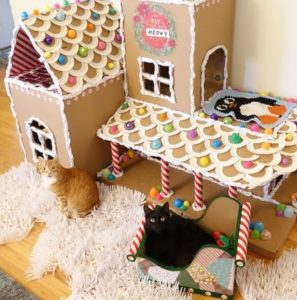 castle. Apparently there is a YouTube bonanza of how-to videos, books, blogs and seminars. The Public Library in Spokane, gets boxes and so holds “Build Your Cat a Castle” events. Get busy.
Chris Poole’s cats, Cole and Marmalade, with their multiroom gingerbread house. Photo: Chris Poole. I think from Tampa. [in the WSJ ]

Floridians in Tallahassee saw snow for the first time in 28 years. Resident Laura Donaven was able to build a 6-inch tall snowman.
WOW!

Item #3: A twit tweets, or something…

I’ve been pumping gas since before I could legally drive. Years ago, we were passing through the Great State of Oregon and needed gasoline. I got out of the car, removed the filler from its holder, and was about to insert the snout into the car. Then an attendant rushed to me and informed me of my criminal ways.
No wonder I think the State is a strange place full of crazy people.
This year, in small population(<40,000) areas, Oregon is allowing "self-serve" pumps. People are going bonkers: "There is a reason we require gas attendants to have a pumping license. Many people don’t have the training to use gas pumping machinery, and it WILL end in many unnecessary deaths from explosions . . .”
I guess that was on Facebook. Is that a tweet, or a twit? 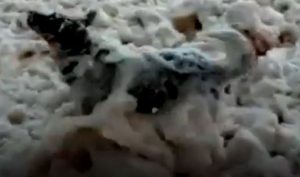 Sea foam forms when storms churn a mixture of seawater, dissolved salts, proteins and algae and any other dissolved organic matter that happens to be in the water.
It is not toxic, but it is dirty, sometimes brownish.
Watch, at this link.
Sea Foam

Item #5: Jokes for those getting old …
My birthday was Thursday, this week. “Old age” jokes are easy to find, so I give you two.

The first one I found funny because a certain male relative wet some flour in the middle of our kitchen floor. It was a long time ago, and I think he was 5.
After a medical exam, the doctor says to Fred “You are in great shape, how do you explain it?”
Fred says, “I don’t drink, or smoke, and the Lord takes care of me.”
Really, what do you mean?
So Fred continued “Among other things, when I get up at night to go to the bathroom, He turns the light on for me.”
The doctor, wondering about the man’s mental state, mentioned this to Fred’s wife.
She said: “Oh! He’s mostly fine, but that does explain who’s been peeing in the fridge.”
~ ~ ~ ~ ~ ~ ~ ~ ~ ~ ~ ~ ~ ~ ~
Now, that same male relative has been looking into family ancestry and has complained about poor records and confusing names. There is also this: about a block from our childhood home, there was a cemetery. Neighborhood kids, including me, cut across there frequently. This story fits:
About dusk, a teen takes a path that goes through a cemetery. He hears a repeating sharp noise, and investigates. Slowly approaching the sound, he sees a pale old fellow chiseling on the front of a stone.
The kid says, “I thought some awful thing was going on when I heard you.”
The old fellow said, “Awful is right. The idiots that carved this misspelled by name.”

Hop on a plane heading NE from Boston. Soon you will pass over the Bay of Fundy (place with big tides), a short swath of land, and then the Northumberland Strait. Then you come to Cape Traverse on the SW shore of Prince Edward Island. 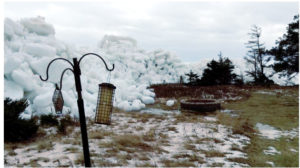 This is the “land cradled in the waves” {Abegweit} in the language of the native Mi’kmaq.
The storm that we are now weary of hearing about brought waves to Abegweit and the waves brought ice. Some of the ice was little bitty pieces and some was big blocks of ice. It, the ice, piled up on the property of Philip Metcalfe. He took a photo.
Now, what was it that you complained about having to deal with this week?