Item #1: Why not be helpful? …
A cute Christmas Tree, on a thin bridge, 300 yards from the center of Longview, WA. 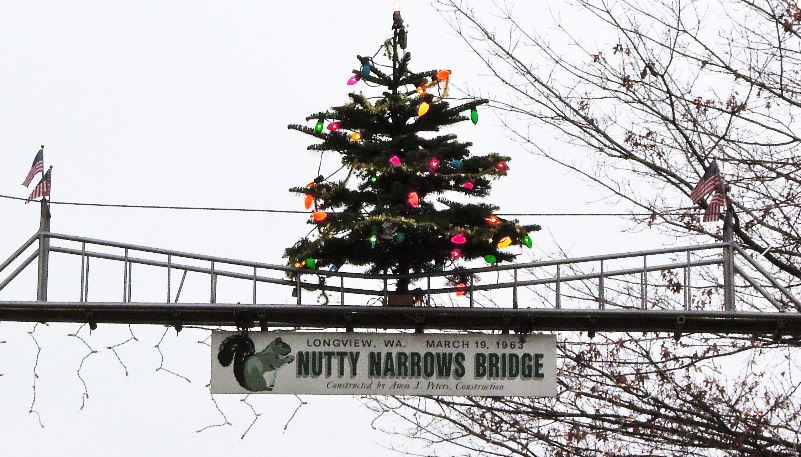 For the squirrels: The ‘World’s Narrowest Bridge’

It is a busy street. With the bridge, they don’t get flattened. That’s good news.

Item #2: Wyoming police are helpful …
Not quite like building a bridge, but still good. 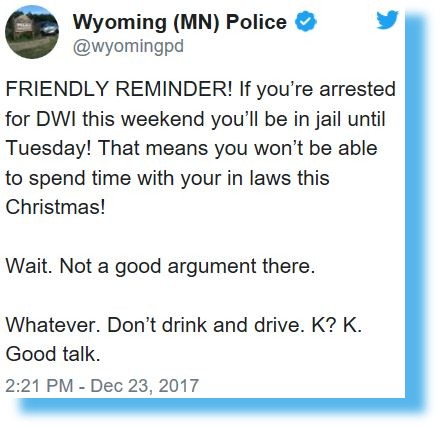 Item #3: Can you spell …?
This one happened awhile back, but it is still funny.
In Australia, a TV reporter on a downtown corner was asking questions of passerbys.
He asked a lady, “First and last name, please?”
“Erica O’Donnell,” she replied.
To be sure the station reported her name properly, he next said
“And could you spell – first and last?”
Without missing a beat Erica gave her reply.
F – I – R – S – T, she spelled. Then L – A – S – T.
Not too shabby. In a split second, early in the morning, while on a jog and with a camera pointed in your face – – could you do better?

Left and right, we have two happy beings. The one in the middle seems unimpressed. What do you think?
I’d mention all the traffic accidents this snowfall caused but that would not fit with the nature of this post. Also, I don’t know.

Item #5: Another snow story
Much has been written about the Erie snow, so I’ll just add a bit.
I was raised just 75 miles south of Erie, PA. There was a little snow there early this week. I found the story Tuesday afternoon when they had just 4 ft. 8 1/2 inches. There is more!
Here’s my story.
When I was in high school, we went from 75 miles south of Erie to near the town center. That was in the A.M.
Mid afternoon we headed back. The City is near the level of Lake Erie, on an old shore. The first mile south includes a 100 ft. increase in elevation. There is a steep little rise south of downtown, and then a continual climb for about 10 miles. From the lake it goes up about 700 feet.
There was no snow in Erie as we left. After the first bench, we encountered snow. About 10 or 12 miles south we had a foot of snow. A few miles on the snow depth was less, but snow was falling, and did so for another 10 miles. Then it tapered off. The last 55 miles was easy.
That was my first encounter with the Lake Erie “snow machine.”

Item#6: Ailsa Craig: Island and Onion
A few times in the past I planted onions. They didn’t do much and seemed not worth the effort. Now I plant them, just to see what happens.
A few years ago I read something about growing onions, namely, that there are short/medium/long –day varieties, and there are bulbing onions. The later are said to ‘bulb’, meaning there is a rapid increase in size and the onion will push soil out of its way.
I found a source for onions and lots of information at a place in Texas called

Ailsa Craig (aka Kelsae Sweet Giant) seems to be the largest. The tiny island off the coast of Scotland provides the name. 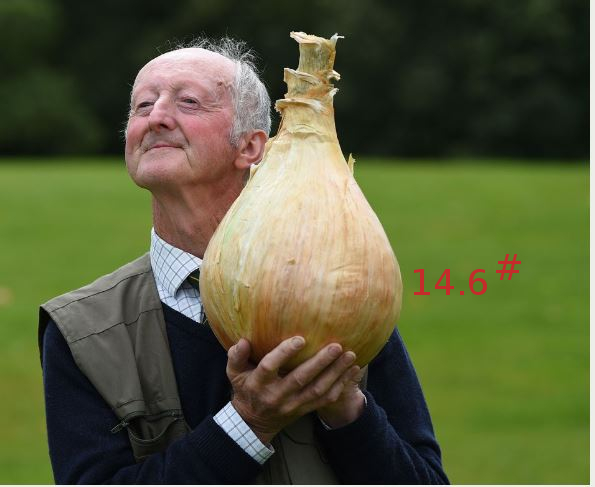 The photo is for this year, but Peter Glazebrook (pictured) has grown a larger one. That and other large things

Now, about that symbol I put on the photo — yes, this one #. It is also used as a symbol for ‘number’, as in my Item #n labels. I was thinking of using ‘ lb.’ and, so, I looked it up. It apparently began with the ancient Romans and Latin. See:
libra pondo
There it will tell you ‘libra’ can be shortened as ‘ l b ‘ and then accessorised with a line drawn across the letters to highlght the use of a contraction. Poor penmanship and further abbreviation took over.

The Brits have called it a ‘hash’ and it is now known as a hashtag (think Twitter), and has been used because it was put on keyboards and didn’t get much attention.
Thus, it was available.

Item #7: Remember William Shatner?
This should thrill everyone. Bill, or Captain Kirk as I remember him, is 86 years old. That great white and frozen neighbor to the north of the USA has awarded Shatner its 2nd highest honor.